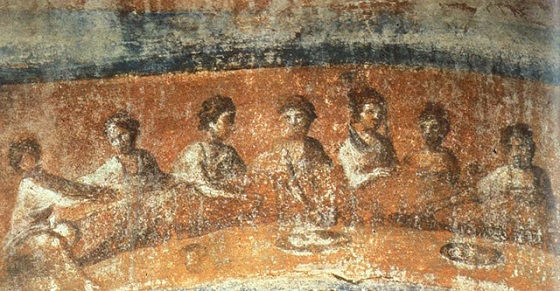 Evans, GA. Contemporary American Christians continue to look for inspirations and examples regarding how to follow Christ in the face of opposing cultural forces. Some hold up Benedict as a timely model, others suggest Augustine, and still others say we should turn to Mary.

Gerald L. Sittser argues that the entire early church should be our guide. In Resilient Faith: How the Early Christian “Third Way” Changed the World he says that “Christendom has more recently become fragile.” Specifically, “Christianity in America is declining, in both numbers and influence. The culture is changing, and we must therefore recognize that we live in a world very different from the one that existed even half a century ago during what appeared to be the ‘golden age’ of American Christianity” (11). Whether this development should be mourned seems at least debatable to Sittser, who writes that Christianity became in many ways “compromised” (7) and “moribund” (177) after Constantine legalized it in 313.

As for how we might respond to this situation, Sittser contends we should not even attempt to redress matters via conventional electoral politics: “It will not work, at least not anymore. It has probably never worked, or if it has, under terms in which the cost was probably too high, sacrificing genuine Christian influence for the sake of political power” (12).

Rather, we should learn from the early Christians, who “did not angle for power, march on Rome, tell the emperor how to rule, or work for his demise” (109). Instead, “Rejecting both accommodation and isolation, early Christians immersed themselves in the culture as followers of Jesus and servants of the kingdom of God,” which manifested in their worship, fellowship, and service (17, 175–76). To perpetuate this way of life they instituted a robust system of catechesis designed “to form people in the faith, to prepare them for church membership, and to equip them to be effective witnesses in the empire” (157). In all of this they never explicitly sought to “transform” the larger culture, although they inadvertently succeeded in doing so simply by faithfully following Christ (16).

After tracing this basic sketch of the early Christians, Sittser spends the bulk of the book filling in the picture with historical details concerning how the early church succeeded in light of the uniqueness of Christ, the cohesive and reconciliatory nature of the church, the character of Christian worship and service, etc.

If these themes sound familiar, it is because they are more than a bit reminiscent of Stanley Hauerwas and William H. Willimon’s Resident Aliens. Those authors also bade good riddance to Christendom and the “Constantinian synthesis” (18); dismissed conventional politics as “accommodationist” (32); declared that the church’s true task was simply to “worship Christ in all things” (45); emphasized the importance of forming “people who more closely resemble, in their life-style, beliefs, and values, disciples of Jesus” (105); and warned against the belief that the church should seek to “transform” culture (38).

In short, truth always bears repeating, and Sittser recapitulates some important truths. We would do well to note in particular that the early Christians took catechesis seriously because Christianity was “so new and different” from the prevailing ways of life—Sittser identifies these as “Greco-Roman religion or Judaism” (6)—that “nothing short of a rigorous training program would have sufficed.” As Sittser puts it, “The catechumenate functioned much like a total immersion program in language study” (157). Greater focus on catechesis in our own time could aid us in reaching the middle ground between accommodating to the culture and isolating ourselves from it.

We would also benefit from understanding that a person’s acceptance or rejection of Christianity often has little to do with rational argumentation. Sittser observes that for many today, atheism “seems less a choice and more a default, as if reason and debate have given way to inertia” (13). In this respect, too, we can learn from the early Christians: “[Celsus] noted that Christians won converts not through public debate among elites—as Celsus would have wished—but through quiet witness in their homes and places of work, which he found disconcerting” (58). We also should not be afraid to witness to people in a way that does not hinge on formulating arguments.

Finally, Sittser is right to remind us that cultural transformation is not a goal we should consciously seek, lest in striving for it we miss the mark altogether. Rather, if it is God’s will, transformation might gradually occur as a natural consequence of living faithfully. As John Bolt has written in A Free Church, a Holy Nation, “American Christians need to learn to think in terms of millennia, not in the short-range periods of single presidential or congressional electoral terms” (441).

All this being said, I would disagree with Sittser’s contention that Christian involvement in conventional politics is rarely, if ever, legitimate. (Indeed, he is so at pains to make this argument that he cites Tertullian, saying, “He noted that there was nothing more alien to Christians than political activity” [110].) As a matter of prudence, I agree with Sittser that in our present circumstances conventional politics will avail us less and less in the foreseeable future. But in my view Christians should not rule out conventional politics entirely, and certainly not in principle. As Brad Littlejohn says in The Two Kingdoms, “Love of neighbor in our context demands that Christians be willing to take action in the public square, whether as leaders or as engaged citizens holding our leaders to account and challenging them to love justice and serve their people” (84–85).

This caveat aside, Sittser’s study of the early church is a helpful contribution to the ongoing discussion of how contemporary American Christians should relate to the larger culture.

Elevated figures in church history have a great deal to teach us, but we should not forget that we can also learn from the early, run-of-the-mill Christians who were as ordinary as we are, yet who, as the collective body of Christ, experienced vibrant faith and incredible growth in an inhospitable environment.