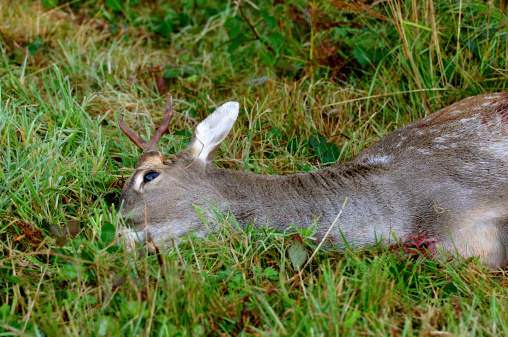 Worden, IL. Tenth grade was high school’s most aromatic year. The sophomore hall doubled as the science wing, so lockers were chronically infected with sulfur, ammonia, and whatever else lurked among the week’s unknowns. But the chemical stench seemed urbane and decent once the Advanced Biology class took up its magnum opus: cat dissection. The cats were issued early in the third quarter, giving lessons in musculature and scenting the sophomore hall for months.

When I received my own plastic bag full of stiff orange tabby, I struggled to take interest in the creature’s deltoids and trapezioids. The main thing I learned from Advanced Biology was that I had little place among cat dissectors. I was not going to be a surgeon, so of what use had the time been? A placeholder on a transcript, an academic dead end: for these things, a cat died.

20 years and 200 miles away, my phone rang. My husband had killed a deer. Was I busy? Not so busy that I couldn’t get there.

It was a doe. There had been a yearling and a fawn with her, a 1 ½ year old and its sibling just out of spots. Deer season is in the fall both to preserve and to control the herd. Humans rely more than they know upon herd control, lest their beloved vehicles become the primary means of managing the whitetail population. Last year in Illinois over 153,000 whitetails were taken by hunters. That’s more than a Joliet’s worth of deer (deer-cities annihilated by vehicles in recent years are closer to LaGrange or Mount Vernon). A deer who lives six years or more is a venerable elder, so the doe’s little ones were well on their way. They’d have been happier with her, but they could do without her.

My husband met me at the treeline with an extra orange hat, and we traipsed back in together. Seven states, including the one in which we live, have recently authorized “blaze pink” visibility clothing, but I am not among the reportedly growing number of female deer hunters. I keep to the ladies’ auxiliary. Duties include tracking animals hit but not down, going for more ice, packing meat, going for more beer, and fanning the butcher with leafy branches when deer season overlaps with mosquito season.

It wasn’t far to where she lay, tawny, fawny; the girl who never entered pageants but was prettier than the girls who did. A deer’s grace is less perfect in reality than in animal art. There is some gawk in her walk over the forest’s rumpled floor. But here as a still life were flanks from central casting, amber waves of hide. This undappled thing exposed the piebald’s deep need for poetic defense.

My husband once threw me a chew toy on the subject: People like hunting deer because they’re pretty. What good could there be in killing a beautiful thing? The answer is well known to the hunter who bends to field dress her. A master should understand his debt to his servants. Cattle and hogs win our respect under the guise of meat alone. A deer gives pause by her beauty. She brings the hunter not to servility, but to a better understanding of his office. Even this lovely thing is his to steward.

He makes a long incision with his knife blade up, as if the doe were an Amazon box stuffed with an order of pillows. The cut runs through the hide straight down from the diaphragm, which dams the blood-filled heart and lung cavity. Soon the supine deer rests beside a mound of her own stomachs. Removal of the bowel is the next task, reminding us that there are worse odors than either formalin-soaked cats or blood. The trickiest move is the extraction of the upper organs. This requires a blind cut through the esophagus and trachea from behind, after the lungs and heart have been manually loosened from the back. The field dresser is to the surgeon as a hobby ukulelist is to Joshua Bell. Every household needs a ukulele.

We load our hollowed lady into a big plastic sled to drag her out, leaving the offal feast for creatures of darkness. Typically, deer are taken to a meat processor where the hunter can have his harvest transformed into a few roasts, and a haul of summer sausage and “deer sticks” (cheese and jalapeno infusion optional). My father-in-law is a meat cutter, so our loyalty to the family business is in the butchering of our own beasts. At the processor, the patriarchal meatsmiths say, you’re not sure you get your deer back, not sure what kind of care they took. They’re throwing good cuts of meat into sausage. We spread a tarp in the garage and hoist our good cuts of meat by the hind legs.

The secret of meat cutting is that there is not much cutting, particularly on a deer. The hipster butcher is used to meat bred for marbling. The fat in the portion before him is engineered for sweetness, variegated through the muscles of animals slaughtered at their first birthday. This allows sculpting of artful meat cuts with artful knives. A dressed hog can yield 65-70% boneless meat, a dressed steer can yield 55-60%. A deer’s meat is around 40% of its gangly carcass.

The deer butcher follows super-lean muscle groups like an Advanced Biology student follows her cat’s. His knife is for nicking, loosening first the hide and then muscle groups along the connective tissue. The meat is not sliced out, but shaken, twisted, and pulled. Trapezius and deltoid are too formal to be named among us. At the meatpackers’, they go by chuck. We collect a bag full of rounds, hocks, backstraps, and tenderloins. Another bag holds neck and shoulder meat for grinding and canning. The deer ends up where, apparently, the orange cat of yore began.

That leaves only cleanup for now. The meat will rest in the fridge for a week. Aging breaks down the highstrung proteins that cause wild meat to taste like musty socks with an endocrine tang. If the day had brought us a big buck, the meat’s sabbath would be longer. But even gaminess is in the eye of the beholder. A Midwest whitetail is acorn fed, but also corn fed, and Roundup-ready soybean fed. Anyone who likes Spanish goat cecina would find American venison tame.

Next week, I will wrap and label the roasts for the freezer. My husband will cut the scrappy meat into pieces small enough for our middle school sons to run through the grinder, giving us several months’ worth of beast tacos and meatballs. Then he and our oldest daughter will load the remaining scrap meat into jars with seasonings, and process it in the pressure canner. The result will be shelf-stable venison, tender as a coddled beef roast. A freezer and pantry full of meat, a season without having to buy any beef: for this a deer died. The kids are mostly good sports about it, even the girly tenth grader. She has delivered two does to the home meatpacking plant herself. She is not planning on taking Advanced Biology.

Men in the Field: The Farming Stories of Leo L. Ward, C.S.C.

Notes on a Mad Hunter’s Morality

The Growing Pains of a Small Farm: Kristin Kimball’s Good Husbandry and “The Problem of Scale”

Notes on a Mad Hunter’s Morality