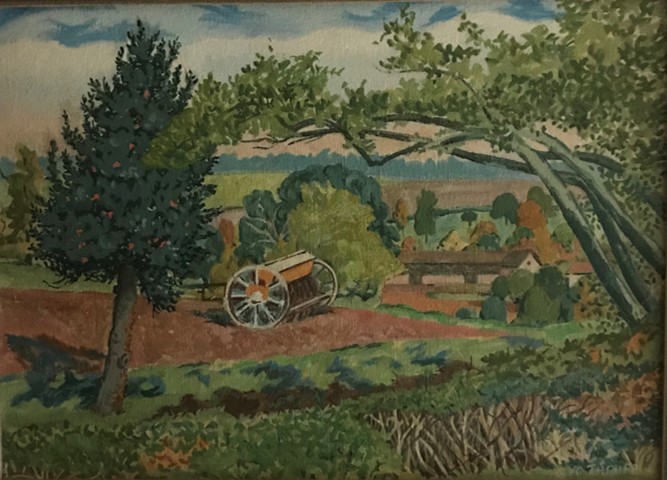 Pittsburgh, PA. Land is critical to humanity, and its ownership has been a driving force throughout human history. In any century prior to this one, the previous sentence would have been redundant. Its inherent truth would have been known by every man alive. Yet now it must be relearned that any localist movement looking to succeed in this world must be tied to the soil. Just like a seed, ideas can initially germinate in unnatural medium, but they must eventually find their own patch of land to grow and spread.

A surprising guide for this re-education can be found in between the narrow covers of J. K. Stanford’s The Awl Birds. Written in 1949, the book tells the fictional but heartening tale of Major Derick Gloyne, a British combat engineer who served in World War II. When Gloyne is first introduced he has just returned from German captivity, captured by Rommel’s Afrika Korps nearly three years prior. He has suffered greatly during his three years in prison, losing much of his body weight and seeing his hair turn prematurely grey. He is also riddled with the stress and anger experienced by so many soldiers returning from war.

Furthermore, Gloyne is a man returning home to nothing. His cousin, his last known living relative, was killed during the Fall of Singapore. The woman he loved was killed the year prior during the Blitz. He is tired of the world and just wants a place to escape from it all. In his mind, the only place that will do is the 600-acre estate of Bledgrave Hall that he knew as a child.

Gloyne is not the only man who felt he needed a knight’s fee to find peace in this world. Louis Bromfield, an American author and agrarian who was a contemporary of Hemingway and Fitzgerald, had a similar line of thought. Stephen Heyman recounts the events that led to Bromfield’s creation of his sanctuary of Malabar Farm in his book, The Planter of Modern Life (FPR ran a review of this fine book).

Bromfield and his family had created a beautiful home and garden in the town of Senlis in France. They had restored the house and land from ruin, which is likely why it hurt so painfully when they had to leave it. With the beat of war drums in Europe growing ever louder, Bromfield did what he had to do to keep his family safe. Returning to America shortly after them, Bromfield began to imagine a way to prevent this from happening again. As Bromfield himself wrote, he would build something like the Medieval fortress-manor of France, where a whole community once found security and self-sufficiency…a place which, if necessary, could withstand a siege.

What both Gloyne and Bromfield realized was that when it came to land, quantity has a quality all its own. While this may violate Wendell Berry’s general rule of trying to maximize the number of “eyes per acre,” in this case it is absolutely necessary. For these men and their ideas required isolation, from both the physical and psychological forces of the world. This was only possible on the hundreds of acres they respectively occupied. On those landed estates, ideas could take physical form.

Gloyne’s ideas took their physical form on the marshes of Bledgrave Hall. Once some of the most productive farmland in all of England, Bledgrave was torn to ribbons by the battle school that used it during the war. Yet, amid the devastation, Gloyne was able to find inspiration.

The inadvertent restoration of the marshes had led to the return of dozens of bird species to Bledgrave. Some, like the avocets for which the book is named, had not nested in England for over a century. Most of Gloyne’s contemporaries saw the restoration of Bledgrave’s farmland as the only logical thing to do, the birds be damned. Gloyne had another idea for the land, one which preserved the newly recovered natural order.

Gloyne was by no means a radical conservationist. He hunted the game species of Bledgrave to fill his pot, and he made plans for the restoration of the gardens around the great house. Yet he rejected the calls for a wider restoration of the estate on principle. The principle that men who could only see profit in the soil had turned the world into such a source of terrors. It would require men acting based on their own conscience and on the needs of the local scale to strike a balance between man and nature.

This resistance born of the soil was not unique to Gloyne. Fitzwalter, Washington, and Lee are perhaps the three most famous men in the history of the English-speaking world for resisting centralizing authority. Yet who are they without their landed estates? Can anyone honestly picture George Washington and the ideas he fought for without Mount Vernon?

These ideas of both right and wrong are born on the local scale, one that imparts a sense of place. It is this sense of place that leads to the defiance of centralizing forces when they threaten the beauty of the place one loves. For in the end, it is beauty and the protection of it which drives men to act.

When Gloyne first saw what had been done to the great house of Bledgrave Hall he was beside himself. Combat engineers like himself had reduced the hall, which had stood since the reign of Elizabeth I, to ruins. As Stanford wrote, “Man, like a destructive monkey, could undo in a few hours what it had taken others three centuries or more to put together.” Yet the beauty of the land had endured, and it gave Gloyne enough hope to carry on. He gathered what supplies and help he could and set about restoring the house as best he could.

As months passed, the beauty of the land and the restored beauty of the great house had a positive effect upon Gloyne. His anger began to fade and he even started to think of the future, of finding another woman to love and starting a family. Fostering the beauty of the world was what he needed to heal.

This dual beauty, the natural beauties God begat and the manmade beauty of things like great houses, or “castles,” is also what Louis Bromfield sought at Malabar. After restoring Malabar’s acreage to a proper state, Bromfield set about building his own “Big House.” Hiring a prominent architect and starting with the base of an old farm house, Bromfield built a magnificent home styled after the traditional architecture of Ohio. The house still stands to this day.

Successful localist movements—and the flourishing people and communities they serve—need beautiful places if they are to survive and thrive. As Sir Roger Scruton put it, “Beauty matters. It is not just a subjective thing but a universal need of human beings. If we ignore this need, we find ourselves in a spiritual desert.” It was nearly a century ago when John Crowe Ransom wrote his famous essay “Reconstructed, but Unregenerate.” In it he wrote of uniting educators, artists, religionists, and ancient New England townships with the farmers of the West and Old South. With policies equating to “Three acres and a cow” and “Forty acres and a mule,” Ransom envisioned a political alliance which could defend the interests of the local scale against the national politics of centralization. In the decades since its publication, Ransom’s vision has gone from being a long shot to impossible.

Small farms have all but disappeared from the American landscape as they have either been annexed by industrial farms or swallowed up by the Lovecraftian force of urban sprawl. With them have gone so many local cultures and customs that shall never return. The idea of “500 Acres and a Castle” offers a guide for how to preserve those local cultures and movements which remain.

By acquiring sufficient acreage, typically a minimum of 500 acres, ideas can be given the isolation they need to have a chance at succeeding, unmolested by the outside forces of the world. Coupled with the beauty of the land and the built environment, the “castle,” a true local culture and community can arise and built upon, to borrow a phrase from Ralph Adams Cram, a “Human Scale.”

Bledgrave Hall may be a work of fiction, but I have been to enough places like it to know that it is a placed based in fact. With the “500 Acres and a Castle” model, places and cultures like Bledgrave can be saved and someday thrive again. Whether these places exist to protect a half dozen birds or an entire community of people, this is the best chance for localism surviving in a mass age. May they serve as beacons of beauty and possibility through the challenging years to come.

Images used are paintings by the author’s great aunt, Katharine Thrupp, contemporary with The Awl Birds.

And Beauty for All