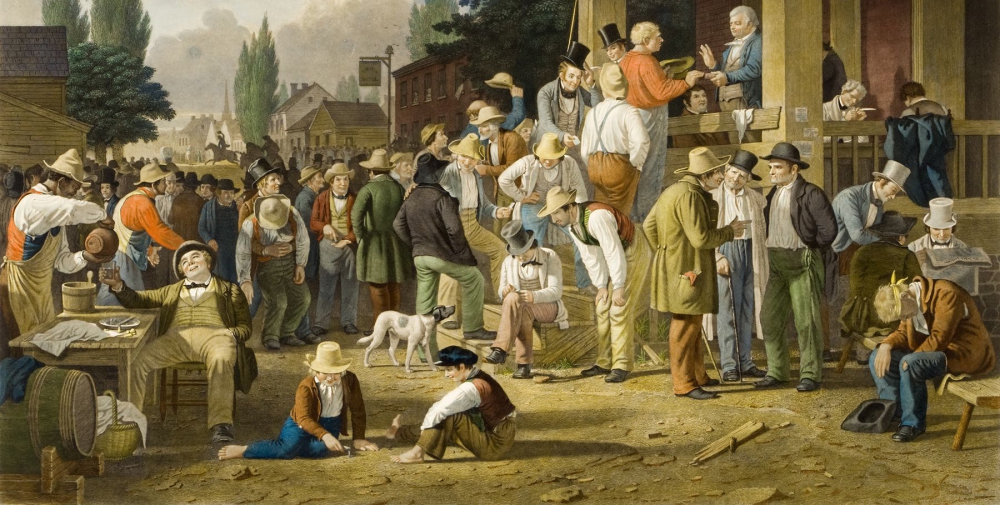 Durham, NC – Ilya Somin is a professor at George Mason University. His recent book, Free to Move: Foot Voting, Migration, and Political Freedom, connects several topics that tend to be treated in isolation. Somin argues that human rights and human welfare would improve if we have more recognition of the right of people to move to new communities within their own country, to immigrate to new homes in other countries, and to make similar choices in the private sector. He calls this “foot voting,” or voting with your feet.

Porchers, of course, are skeptical of people leaving their homes for new communities based on such motives as short-term ambition, a restless spirit, or an unwillingness to make the compromises which make living in one’s original community better for everyone. But too often there are situations where one is faced with such persecution or poverty in one’s home that you must bid a sorrowful farewell to the old place and put down roots in a new community. That’s how many Americans started in America. It’s the situation faced by many modern migrants like the peoples of the old Christian homelands in the Middle East.

Somin, though, seems a tad too enthusiastic about people uprooting themselves. He speaks in these terms of people moving from their natal home to a new community: “The new home, presumably, is one they value more. And the more value people place on a resource, the more likely they are to invest in its maintenance and potential improvement.”

I quoted this red-meat passage to show that Somin is no localist. Yet this is not a reason to dismiss his book sight unseen. In addition to giving the case for pulling up stakes, Somin also gives his attention to the public-policy issues involving what he regards as arbitrary government restrictions on movement. He also denounces governmental policies which flatten out the diversity among different communities. This criticism is not necessarily because Somin is a localist; rather, it is part of his case that if people are given an array of different options regarding where to move, they can vote with their feet by selecting the areas they prefer, improving the condition of their families economically and socially. For example, if someone is tired of high-tax, high-regulation California, he can relocate to lower-tax, lower-regulation Texas.

In addition to benefits to individuals, argues Somin, this kind of migration can have public-policy benefits. Contrary to critics who say bad governments will stay bad if opponents of their policies simply leave instead of working politically to make policies better, Somin argues that these different dynamics—“voice” and “exit”—can work together. If a community’s leaders realize that their policies are driving people off and reducing the tax base, perhaps they’ll change the bad policies which led to so much out-migration. Communities can compete for desirable residents, fearing that if too many people flee they’ll have less tax revenue.

This presupposes that local communities derive their budgets from local taxes. Somin points out the danger that a central government—or even a regional government (like a state) cooperating with the central government—can offer “free” money to localities, so the localities don’t have to worry so much about local taxpayers. The localities won’t have to compete for taxpayers, and the value of foot-voting is reduced. So, on this issue Somin can make common cause with those who worry about distant authorities stamping out the distinctiveness, freedoms, and values of local communities.

On the question of international migration, Somin advocates what seems fairly close to an open-borders ideology. Migrants should be able to improve their lives by departing their home countries and choosing any other country they would prefer. As for specific policy changes, Somin would expand refugee law: in addition to letting refugees from political or religious persecution take shelter in other countries, he would give everyone who lives under an oppressive regime the presumptive right to resettle in another country. He would also provide refugee status to those fleeing economic oppression as well as specifically political oppression.

Somin considers and rejects various arguments for restricting immigration. His most interesting point is that arguments for restricting international migration would necessarily and logically work to limit internal migration within a particular country. Thus, to be consistent, advocates of America restricting immigration to protect jobs or the country’s cultural character must also advocate government restrictions on the movement of American citizens if their resettlement in another area of the country would depress wages, etc. But as Somin acknowledges, the right of an American citizen to have freedom of movement in his own country is a constitutional right, acknowledged even in the otherwise-narrow Slaughterhouse Cases in the U.S. Supreme Court. And there’s no benefit to being a citizen if your freedom of movement can be restrained like the freedom of movement of a noncitizen. That would abolish distinctions between those who are citizens and those who are not.

While Somin wants to rethink these distinctions, he doesn’t want to abolish them. Responding to concerns that immigrants may, once admitted to the ballot box, reshape the culture and change the country’s basic character, Somin suggests that the right to migration could be separated from the right to vote. When massive numbers of immigrants are let into the country under Somin’s plans, they could be denied the suffrage. Likewise they could be barred from welfare benefits to make sure that their incentive for coming is to seek work, not welfare. Somin’s distinctions may make sense, though it seems likely that some political party would come in and offer naturalizations and voting rights to the immigrants in exchange for various kinds of benefits. This is, after all, an approximately 200-year-old American tradition.

Somin’s arguments are more consistent and plausible in opposing centralization, both in the national and the global context. The right to international migration could be stripped of its value if a powerful world government—which would always in danger of becoming an open tyranny—could erase distinctions among countries the way a central national government might erase distinctions among local communities: with every place the same (in a bad way), there would be no value in exchanging one location for another. It is precisely as an open-borders internationalist that Somin opposes a planetwide central government: “Cosmopolitans who support free migration also have good reason to take a dim view of world government and other similar proposals.” Regrettably, as Somin notes, the rising generation, while sympathetic to Somin-style open borders, are also sympathetic to non-Somin-style world government. Ever the optimist, Somin hopes that growing open-borders enthusiasm can be harnessed without giving ground to the world-government enthusiasm among the same cohort.

Basically, Somin points out the benefits of allowing people to move from one home to another. He is so skeptical of government restrictions on that right that he even would allow greatly increasing the number of immigrants coming to this country, while leaving them disenfranchised if that’s the way to get support for his plan.

Enfranchisement may not have a great deal of value in Somin’s worldview anyway. In this book, as in earlier works, Somin cites lots of research to support his contention that voting (from Presidential elections right down to jury trials) reflects ignorance and bias on the part of the voters and is not a good vehicle for defending voters’ rational self-interest or community or national interests. The form of voting with the best effects, says Somin, is foot voting, where the migrants consider their specific interests and form specific answers to their problems, which the typical non-foot-voter allegedly can’t do.

We may grant that voter ignorance and bias may be a very serious problem in elections for larger jurisdictions: gubernatorial, Presidential, etc. But local people sitting on juries, in town meetings, etc. are capable of mastering relevant details and applying serious consideration to these details in search of a proper solution. If this ability has been diluted by centralization, then that centralization can be reversed—which Somin wants, albeit for his own reasons.

It would be nice if Somin (in addition to dialing back some of his strongest proposals) would see migration (national and international) as a remedy for intolerable situations, a lesser evil, not a desirable thing in itself. Those who aren’t oppressed or impoverished but are tempted to leave their ancestral homes through ambition or restlessness, might stop and think. War, violence, and failed governments will continue to push people out of their homes, and lesser causes may sometimes make foot-voting a necessary evil. On the other hand, the growth of remote-work opportunities may paradoxically encourage more local loyalty by allowing people to work from home—a home perhaps remote from their work but close to their grandparents’ graves.