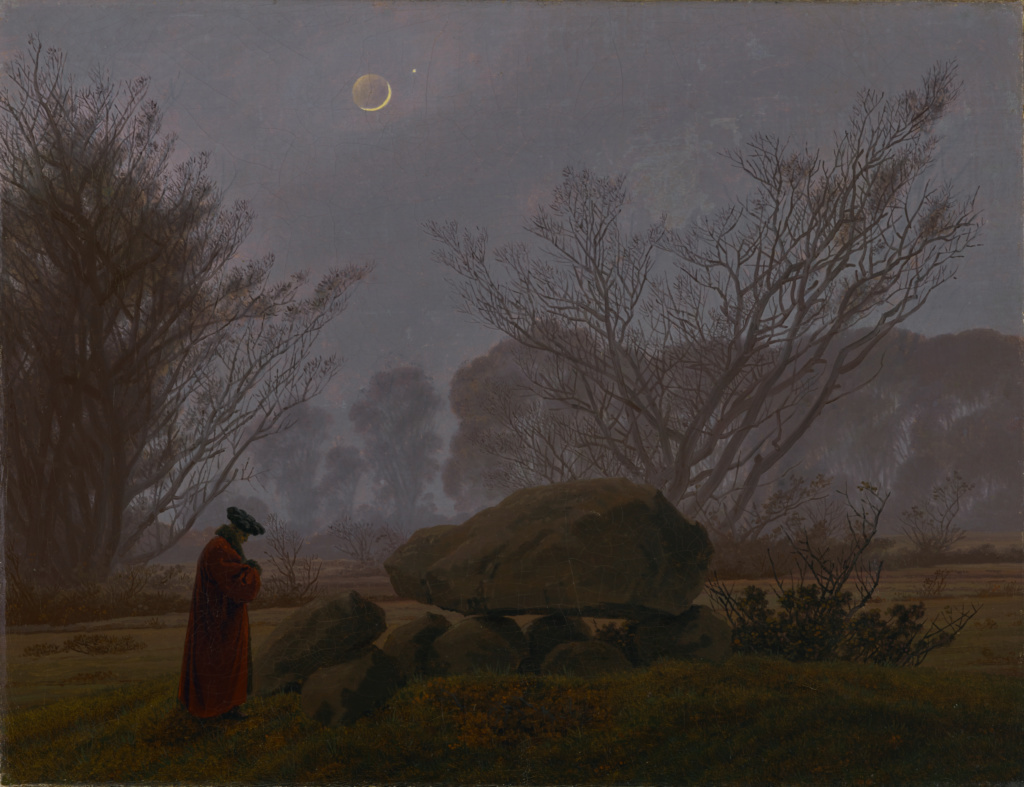 This is the first essay in a three-part series of reflections on Ross Douthat’s recent book The Deep Places. The others will run later this week.

Baltimore, MD. When I speak with doctors in training about the role of narrative in medical practice, some are surprised to learn that conflict is that necessary ingredient without which there is no story. Absent conflict, the tales we tell are nothing more than chronicles of events. Medicine, I remind them, is filled with conflict and therefore with stories. Patients (from the Latin pati, “to suffer”) rarely seek medical care in the absence of conflict. The ill person wishes to be well again. The pain-afflicted person craves relief. The parent wants her child to avoid serious illness. As a wise old Emergency Room doctor once advised me, “There are two reasons people come to see us—pain relief and mind relief—and it’s usually the latter.” He had seen his share of severe physical trauma, heart attacks, strokes, and impeding death, but he still recognized the patient’s experience of a body and mind under attack.

Stories are at the heart of medical communication, starting with the patient telling a medical professional his complaints, experiences, and concerns. The provider’s task, then, is to reframe the patient’s history in light of the physical examination and thereby construct a provisional diagnosis. This, in turn, will guide her selection of diagnostic tests and appropriate therapy. Using a helpful distinction presented in Arthur Kleinman’s The Illness Narratives, what the patient describes—i. e. how he and his “family or wider social network perceive, live with, and respond to symptoms and disability”—is his illness. What the practitioner “creates in the recasting of illness in terms of theories of disorder” is the disease. In the terms of contemporary medical science, disease is diagnosed (from the Greek diagignōskein, literally “to know apart from”) by interpreting the patient’s story, exam, and data in terms of a measurable alteration in biological structure or function: a mass on the X-ray, a change in the blood test, abnormal cells in the biopsy.

The conflict at the heart of Ross Douthat’s The Deep Places is that he suffers from an illness for which medicine recognizes no corresponding disease. There is no dispute over the existence of Douthat’s initial—albeit provisional—diagnosis of Lyme disease, a Center for Disease Control and Prevention recognized infectious condition complete with diagnostic criteria, a specific causative organism, and recommended antibiotic treatments. For those whose symptoms persist long after treatment, however, neither the CDC, nor the National Institutes of Health, nor the Infectious Diseases Society of America recognizes “Chronic Lyme Disease” or “Post-Treatment Lyme Disease Syndrome” as scientifically verifiable. In the absence of what the New England Journal of Medicine called “reproducible or convincing scientific evidence” of disease, these institutional voices of what I’ve come to call the medical-industrial complex strongly advise against long-term antibiotic treatment. They do so with good reason, knowing that indiscriminate antibiotic use can and frequently does result in complications, some of them quite serious.

Yet for Douthat and others suffering from this illness for which there is no agreed-upon disease, the CDC’s advice amounts to telling “anyone suffering through it … to basically keep on suffering.” Douthat vividly describes what that suffering entails: waves of crippling pain, unending fatigue, sleepless nights, a persistent “brain fog.” Unable to accept these as the prevailing conditions for the remainder of his life, Douthat seeks out physicians willing to flout CDC recommendations and prescribe long-term antibiotics. The benefits prove significant but fleeting, and Douthat finds himself consulting a series of unorthodox providers to whom he assigns descriptive pseudonyms: “the Reassurer,” “the Maverick,” and “the Magnetizer.” Like many people with debilitating chronic disease, he gleans advice from fellow sufferers and tries various treatments ranging from the exotic—an electromagnetic frequency emitting “Rife machine”—to that most traditional recourse of the afflicted, prayer. Only after an extended bout with COVID-19 do his Lyme-associated symptoms fade—not, it seems, into a complete resolution, but something more like a compensated equilibrium, a place of sufficient wellness to go on with one’s life.

Throughout his harrowing search for a remedy, Douthat remains open to the possibility that his temporary responses to various treatments may have been coincidental rather than causally related, something those who deny the existence of chronic Lyme disease insisted all along. What he’s unwilling to do, however, is to deny his own experience of a life divided into pre-Lyme wellness and post-Lyme misery, nor can he accept the institutional rejection of therapies that, if unproven in conventional group studies, are reported to have benefitted many individuals. The number of patients enrolled in a study (referred to as the study’s “n”) is more persuasive when large. All other variables being equal, the results of a medical trial with one thousand subjects are more trustworthy than those with an “n” of twenty, especially when the results are negative. For the patient, however, the “n” of significance narrows to one: me.

As a physician, I find myself torn when reading Douthat’s account, tempted to rehearse “scientific medicine’s” sad history of using unproven treatments that caused more harm than good, yet unable to tell Douthat and his fellow sufferers “Go in peace,” without addressing the reality of their suffering. Evidence of absence is notoriously difficult to come by, yet alternative explanations for the symptoms attributed to chronic Lyme disease such as fibromyalgia or chronic fatigue syndrome appear equally conjectural and unproven by scientific standards. In a battle to define what’s a real disease, neither side is likely to yield. This is not the place nor am I the person to broker a truce.

What I can do is examine Douthat’s moving account of illness through another helpful interpretive lens. In a much celebrated book, The Wounded Storyteller, Canadian sociologist Arthur W. Frank describes three primary illness narratives, the stories we tell to make sense of our inevitable encounters with infirmity. The most popular is “the restitution narrative,” which follows the basic plot, “Yesterday I was healthy, today I am sick, but tomorrow I will be healthy again.” If this isn’t always what the medical industrial complex has to sell, it is what most of us are looking for. Ultimately, however, the teller of this story is not the patient but medicine itself, purveyor of cures for the medical consumer. The challenge for the medical provider is to meet that expectation, if not immediately than with a promissory note. The promise of a cure for cancer, Parkinson’s, or Alzheimer’s is what keeps research on seemingly intractable conditions funded. Perhaps such remedies will come in time, but when restitution to prior health proves unavailable, other stories must be found.

An alternative is “the chaos narrative,” in which the vaunted powers of medicine prove insufficient and no one appears to be in control. The sufferer’s experience becomes a series of unfortunate events, a nightmarish sequence of one damn thing after another. Suffering overwhelms the sufferer’s story-telling ability. The provider’s challenge here is to acknowledge the limits of her power to fix things and truly hear what Frank calls “the most embodied form of story,” one that is “told on the edges of speech.” The pace of contemporary industrial medicine makes that task increasingly difficult. As Frank notes, a model for the chaos narrative is found in the opening lines of the biblical Psalms of lament, where the speaker calls on God for rescue from imminent destruction.

In Frank’s other alternative, “the quest narrative,” the sufferer takes control of the story, assuming the role of protagonist for whom suffering is integral to the search for resolution. In contrast to the restoration narrative, the sufferer comes to understand there will be no return to a prior life. There is, instead, the possibility of an accommodated new life marked with hard-won wisdom. The quest teaches the sufferer “that contingency is the only real certainty,” a spiritual lesson learned in Douthat’s “deep places.” The challenge for the provider is to ask for, listen to, and acknowledge that story, recognize the patient’s agency and perseverance, and respond with compassion and respect. It is not necessarily the provider’s role to fix anything and certainly not to offer false hope. Rather, her role is to accept Wendell Berry’s observation that “medicine is an exact science until applied; application involves intuition, a sense of probability, ‘gut feeling,’ guesswork, and error.”

In Frank’s taxonomy, Douthat is on a quest. Furthermore, his story blends what Frank calls an illness memoir and a manifesto. Douthat’s story is a memoir to the extent he relates his experience straightforwardly and without rhetorical flourish. It is a manifesto in that he sees the medical industrial complex suppressing or minimizing the reality of his—and others’—suffering and wants that to change. For now, however, what passes for public debate on this controversy rarely rises above mutual incomprehension and often falls into exchanges of invective and accusation. Nearly two years of experience with the COVID-19 pandemic has made it all too clear that “following the science” is never a simple matter of scaling the latest research results into public policy. Public health must be guided by the best available scientific evidence, but policies result from careful interpretation of that evidence, informed assessments of feasibility, and reasonable estimates of risk and benefit.

As an applied science, medicine is an open-ended practice in which available evidence, feasible means, and social conditions change over time. Conversing with the potential beneficiaries of any such application, even those who see things very differently, is more than an act of courtesy. It’s a professional requirement. Interested parties on all sides will need to turn down the rhetoric dominating these controversies. Practical concessions that do not compromise ethical responsibilities may become necessary. In The Deep Places, Douthat is, I think, proposing a conversation. As a low-level functionary in the medical-industrial complex, I would like to take him up on that offer. There may be much to learn from sharing our stories. Whether others will join us is more than I can promise.