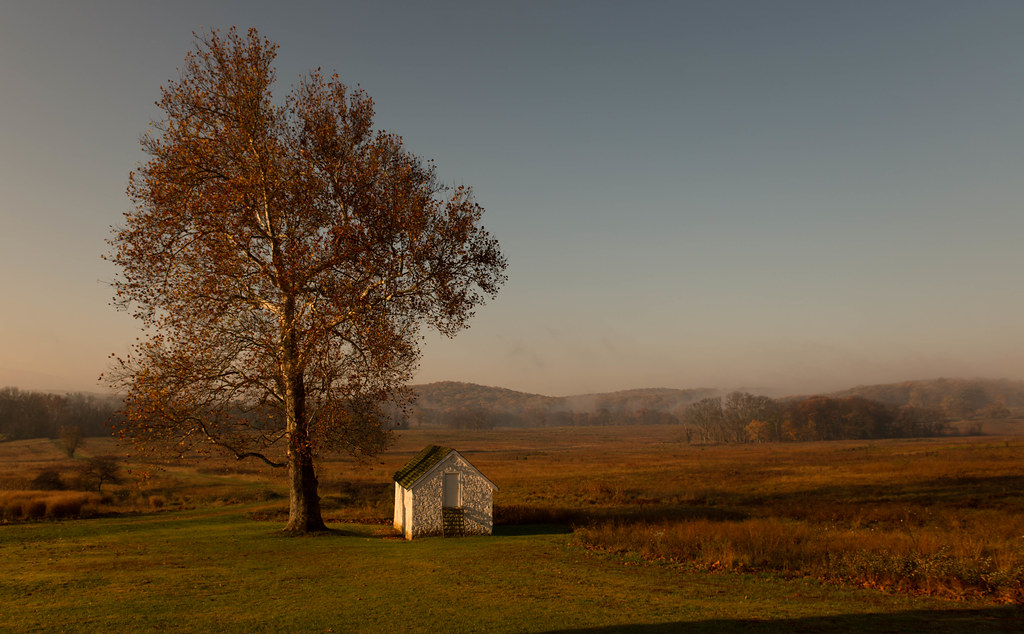 This is the second essay in a three-part series of reflections on Ross Douthat’s recent book The Deep Places. The final one will run on Friday.

Greer, SC. Before his illness, Ross Douthat had a dream of owning land. His book The Deep Places tells how this dream collided with an unfortunate reality. The dream, to live near a primeval source of beauty and wonder, darkens when that land becomes the source of his suffering. Telling the story of Lyme disease carried by ticks, the book relates the abandonment, reforestation, and suburbanization of New England countryside that might have contributed to Lyme’s resurgence in the twentieth century. Douthat’s experience is especially tragic because he tries to escape the vagrant drift of American culture, and yet this return to the land may have marked a certain demise. The forest near his Connecticut home, once transformed ecologically, has now regained a health that threatens human beings.

The book conveys a psychological fall from a pastoral ethos to the gothic, into the dark country of Hawthorne, Melville, and Frost. In Melville’s novel Pierre: or, The Ambiguities, the narrator speaks of “the infinite inhumanities of those profoundest forests” as the titular character experiences disillusionment from his naïve pastoralism. For Pierre, the central question this inhumane landscape provokes is, as the narrator puts it, “chance, or God?” That same question haunts Douthat as he experiences chronic pain, his landscape of suffering. He wants to believe in Providence: that “suffering is for something, that you are being asked to bear up under it, that you are being in some sense supervised and tested and possibly chastised in a way that’s ultimately for your good, if you can only make it through the schooling.” Yet, watering his garden on a New England summer evening, a setting he had imagined for so many years in his former life in Washington, DC, Douthat is “filled with hatred for the landscape.” In an airport, a Benedictine monk reminds him of the common Christian response to suffering: it is a gift for “purgation, refinement, redirection.” But nothing appears straightforwardly providential about his chronic pain. “Is man no more than this?” asks King Lear in Shakespeare’s play. “Consider him well . . . . unaccommodated man is no more but such a poor, bare, forked animal,” tossed to and fro in the inhumane storm of nature.

Douthat comes to realize at least three important insights concerning nature and religious understandings of suffering. First, he is reminded of the basic Old Testament truth that we are dust, part of the very landscape we inhabit. As Douthat notes, invoking philosopher Charles Taylor’s “buffered self,” we moderns want to believe we can isolate ourselves from environmental influences, that we are alienated enough from nature to transcend its contingences. But hearing a Mass reading from Job, Douthat remembers that ease in this life is not guaranteed: our flesh will return to dust. The natural world continues to impinge even when we try to fortify ourselves with distractions and comforts and medicinal defenses. As Douthat observes, the “territory of [health] really is an ecosystem.” “The body isn’t a clean machine that sometimes breaks or leaks or rusts. It’s a landscape in which many things take root.” Douthat evocatively weaves in poetry from William Stafford, William Butler Yeats, and Alfred Lord Tennyson to make this point. He cites Yeats to describe how we often must “lie down where all the ladders start / in the foul rag and bone shop of the heart,” holding fast to the little that we know. Only from this place of desperate humility might we hope to learn from our suffering.

Second, he learns that religion is indeed a crutch in times of suffering, but rather than providing an escape from pain, it more accurately serves to reorient the self beyond the pursuit of individual health and toward the reality of the cross. Douthat’s Catholicism provides disciplines for this kind of perseverance. Douthat recounts driving to a church to kneel and pray at an outdoor calvary scene, each day completing another step that leads to the wooden cross, hoping that, by the end, his sickness will have departed. But on the twelfth day, he doesn’t even bother with the steps. He collapses in the nave, arms “stretched toward the altar in supplication under the saints’ and angels’ stained glass gaze.” The story Providence often tells is not one of miraculous healing but the “heavy burden of a cross,” and Douthat comments that nothing in his education prepared him for this truth. In times of crisis, we come to realize the degree to which we have assumed a general arc toward happiness. Painful as it is to give up this illusion, Douthat also comes to appreciate the support he has and the blessings and good fortune to pursue remedies, and, as a result, he discovers grace when he despairs for himself and the medical system that fails to treat his condition effectively.

Third, he discovers that the land itself cannot satiate the romantic desires he had foisted upon it. The beauty of nature can be a respite, a means to forget our pain, but the more we are ensconced in the land, the more we realize our suffering sometimes stems from nature itself. In addition to his chronic pain, other difficulties bombard Douthat and his family as they try to escape their New England paradise. They have significant trouble reselling their home, they discover a buried fuel tank that poses an environmental hazard and costs mightily to extract, and, once they remove to New Haven, a bat flies into their new home, forcing the family to get rabies shots. In all of this Douthat is learning to relinquish the dream that nature can deliver him from the work-a-day world.

Here Douthat provides an important revelation that Front Porchers might overlook, familiar as we are with the Berryian critique of romanticism in favor of a working relationship with nature. Romanticism does have its uses, though perhaps we can see these uses only after we understand that the land alone cannot satisfy. Once the family departs from their Connecticut home, Douthat says he no longer feels the “loathing for the landscape that I had felt in the depths of my imprisonment.” The romantic attraction to the white-shingled houses and red barns returns, but now he can perceive what “[lies] behind them—the woods and their darkness, cool and enveloping and deep.” In his famous poem, Robert Frost turns aside from merging with the “lovely, dark, and deep” woods because he has “promises to keep.” It is our commitments, in particular to the Creator and to higher orders of significance, that help us understand rightly creation’s beauty commingling with what the theologian Karl Barth called its “shadow side.” We endure nature, a world of impermanence, through faith that nature is neither final nor ultimate.

Does romanticism inevitably set us up for disappointment once suffering begins? The Deep Places portrays romantic stirrings as part of the human condition. The pastoral is undercut by the gothic, but those initial yearnings are an essential waystation to help us overcome illusions and really begin to grapple with the landscape of suffering. Per Frost, Wordsworth, Coleridge, and other romantic poets, a mature romanticism always includes the gothic, the deep places.

In other words, Douthat shows that creation beckons toward a higher plane, a religious understanding that entails a wonder more consistent and coherent than escapist rhapsodies. Many new romanticisms today tout the natural world’s creative “materialism” while also purporting to disavow determinism, but they tend to re-inscribe determinism when they fail to make a crucial distinction: that between creation and Creator, the immanent world and the transcendent divine. By assuming that the non-human world runs by its own creative agency, these new materialisms enclose the world in a limited scheme of possibilities. Douthat’s Catholicism continues to insist that anything might happen, even miraculous healing beyond what medical science knows or can dream of. “Deep calleth unto deep at the noise of thy waterspouts,” as the Psalmist puts it, invoking the personal God who is both Creator and Redeemer. “All thy waves and thy billows are gone over me.” If, as Christianity teaches, evil has no positive existence, even the threatening waves and billows are there to draw us back to shore and remind us that nature cries out for redemption. All creation yearns for the “sons of God to be revealed,” as Paul puts it in Romans 8.

One hopes that Douthat continues to discover remedies for his condition, but his experience has produced a book in which the natural world confronts us with suffering’s source and signifies the possibility of redemption. The Deep Places elucidates creation’s shadow side, the abyss of suffering that leads us to search for answers to our most profound questions of creation, pain, and evil.