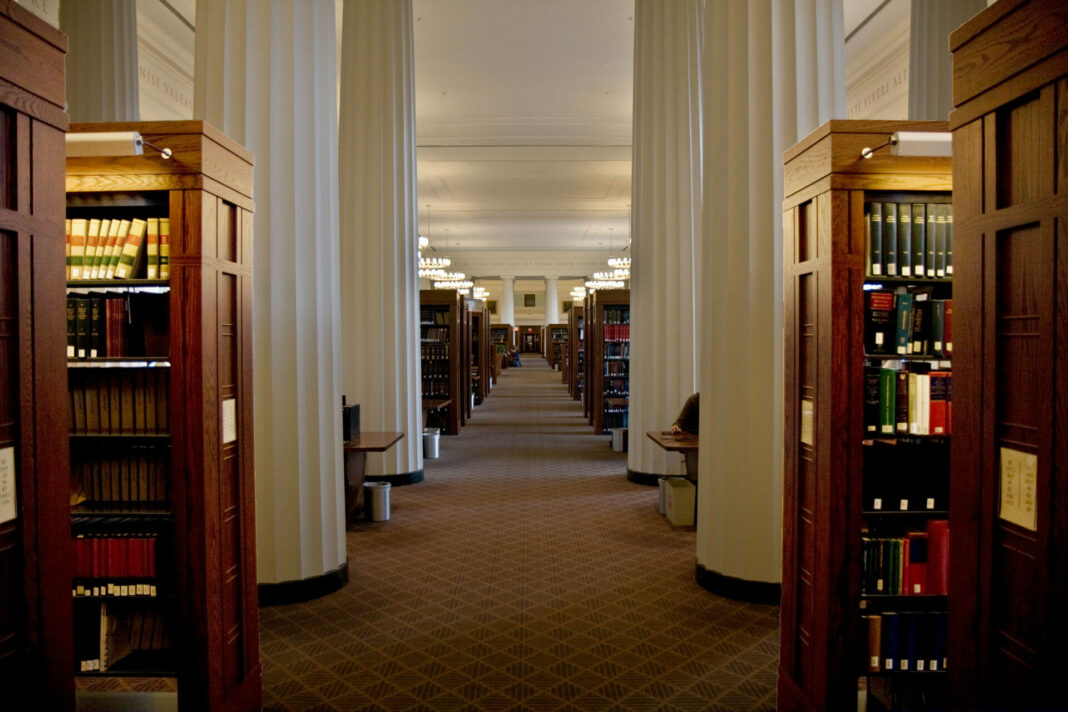 Durham, NC. Adrian Vermeule is a constitutional-law professor at Harvard Law School. Of particular relevance to his new book is his status as an enthusiastic Catholic convert and a specialist in federal administrative law. His recently released, and long-awaited, book, Common Good Constitutionalism is bound to make a big splash in the legal and political worlds. In this short volume, Vermeule seeks to revive the classical legal tradition in America and to present his views on how American authorities—especially courts—should apply that tradition. This review will look at some key points of the book, with particular attention to the issues of concern to localists.

Vermeule attacks head-on the dominant schools of constitutional interpretation, declaring that his proposal transcends both and is superior to them (this is why the book is making a splash). Here is, generally, what he says: The followers of the dominant schools, legal progressivism and originalism, “are in a symbiosis of rivalry, exploiting the other as its necessary hate-object and fundraising target” (183). They fight each other, but they are “co-conspirators” (50) against the classical tradition. The classical theory has been “driven underground” (181), where it sometimes has an unacknowledged effect on judges’ opinions—Vermeule cites some of these opinions as de facto expressing classical principles—but the damage done by the two rival, bad theories has frequently derailed the law from its classical track.

Originalists promote their school as providing stability to the practice and application of the law. Vermeule’s response to this is two-fold. On the one hand, originalism’s “essentially Protestant” approach to interpretation (not a compliment) would unsettle many areas of the law. But on the other hand, its premise is wrong—if stability reinforces an unjust status quo, the status quo ought to go.

Progressive constitutionalism, originalism’s purported rival, practices the “liturgy of liberalism” (119), which involves achieving repeated public triumphs over the forces of traditionalism and reaction, delegitimizing dissenting views as evil, not just mistaken. This is a process of “restlessly defin[ing] new targets to be overcome” (117), the promotion of a left-wing individualistic vision, and—in the name of individualism—promotion of “state coercion” (120), presumably including things like bakers being forced to make cakes for gay customers. If originalism is akin to Protestantism, progressive constitutionalism is like theological modernism.

The alternative to these two modern theories is classical constitutionalism. This doctrine is based on natural law (the God-given law written on the human heart), the ius gentium (law of nations), and the traditional law of Europe—the ius commune—of which Vermeule considers the common law to be a part. Under the classical approach, the fundamental principles of the positive (enacted) law come from the natural law by a process of “determination” in which public authorities make decisions as to what laws are needed to carry natural law principles into execution. Those who interpret and apply the common good can still “disagree, perhaps bitterly” (36), but then the same is true of the other schools of interpretation, including originalism, despite proponents’ protestations.

Classical legal systems come in all shapes and sizes in different countries—a country in the classical legal tradition can be monarchical or republican, it can have judicial review of the constitutionality of statutes, or not, etc. In the American context, Vermeule says that “the classical view . . . requires courts to make reasonable judgments, in good faith, about whether public authorities have made reasonable judgments in good faith” (71).

In America, the classical legal tradition was recognized by judges and jurists until the twentieth century, when the Progressive movement, and in particular developments since World War II, caused the legal system to degenerate into modern theories of progressive constitutionalism and originalism. The unacknowledged, perhaps unconscious, use of classical legal principles in many (not all) important judicial decisions prevents the situation from being as bad as it could be, but the deviations promoted by modern doctrine must be eliminated and the classical tradition needs to be specifically acknowledged and to guide judicial practice.

The above summarizes Vermeule’s account of the classical legal tradition. While recognizing that the classical tradition has traditionally accommodated quite a diversity of political systems and approaches to judging, Vermeule urges a particular application of classical principles when judges come to review the U.S. Constitution: Federal predominance over the states, a powerful President governing with the help of a powerful bureaucracy: “bureaucracy properly and intelligently applied is an engine of unsurpassed power for promoting the common good” (135). There would also, in Vermeule’s vision, be a large degree of judicial deference to the government (state, federal, or local) when it’s accused of violating the rights of the people.

Vermeule’s only reference to the constitutional amendment process is when he refers to “an old written constitution such as ours, rarely amended” (111). Rather than calling for amendments to adapt the Constitution to new circumstances, he believes that the existing Constitution, without further amendment, can adapt to a changing society by analogy to Cardinal Henry Newman’s theory of doctrinal development in the Catholic Church. As with doctrinal development, the development of Constitutional doctrine would not involve replacing existing principles with others—the project of the progressives—but adapting existing constitutional principles to the changing needs of society while retaining the common-good orientation he advocates.

Under the classical legal approach as Vermeule sees it, certain Supreme Court decisions would be curtailed or overruled—decisions on “free speech, abortion, sexual liberties, and related matters” (41). For instance, common-good constitutionalism, Vermeule says, would permit less freedom of speech under the First Amendment than many Supreme Court precedents, starting in the 1960s, would allow (168-69).

There would be fewer changes in the jurisprudence over federal power vis-à-vis state power. Vermeule correctly points out that modern Supreme Court decisions effectively award the federal government “a general police power.” Earlier constitutional interpretations had imposed limits on federal power and had declared certain powers to be reserved to the states. Now, however, the centralizing policies of the New Deal, the Great Society, and the environmental laws, “many of which modern libertarians and localists condemn as constitutionally dubious,” have proven durable (34).

And Vermeule generally approves of these developments. He thinks the Constitution gives the federal government a direct power to legislate for the “general welfare”—to pass laws on any subject which a ruler can address for the common good. The progressive doctrine is, technically, less ambitious than Vermeule but reaches the same results—through a broad interpretation of the Commerce Clause and the Congressional spending power.

Yet at the same time Vermeule affirms a role for subsidiarity, or at least “appropriate subsidiarity” (37). In this regard the constitutional method he advocates would be an improvement for localists, to an extent, over the present system: “unions, guilds and crafts, cities and localities, and other solidaristic associations will benefit from the presumptive favor of the law, as will the multigenerational family” (42). Subsidiarity, Vermeule argues, is linguistically derived from the Roman army’s reserve force—the subsidium—which only joined in a battle when it was truly needed (Vermeule also uses the phrase “subsidiary institutions” in their more common meaning, to mean lower levels of authority in state/society). Like the subsidium, the central government should only interfere in local institutions when necessary.

Vermeule cites a character in Shakespeare’s Measure for Measure, who says

…O, it is excellent

To have a giant’s strength, but it is tyrannous

The giant, obviously, is the federal government—it’s good that the feds have a giant’s strength, but the “giant’s full strength” should only be stretched forth in “unusual circumstances” when “the malfunctioning of subsidiary institutions means that the common good requires extraordinary intervention by the highest level of public authority in the juridical order, for the purpose of helping those subsidiary institutions function correctly in an overall scheme that conduces to the common good” (154-55).

But how to “institutionaliz[e] those limits”? Vermeule does not want “a hard constitutional limit on the acts of the highest authority” (158). States’ rights under the Tenth Amendment are the wrong way to go, from Vermeule’s perspective, and anyway states can be as large and un-local as the federal government.

Instead, Congressional rules can require Congress members to certify, when they pass a law, that they’ve considered the concerns of subsidiarity. Federal administrative agencies, if they pre-empt state law in one of their regulations, should explain their justification for doing so, subject to the usual judicial review to verify that the agency’s action isn’t arbitrary.

Vermeule’s version of subsidiarity, while an improvement over what we have now, is still fairly tilted in the direction of federal power. Vermeule supports the Supreme Court’s decision in the Raich case, which said the federal government could ban marijuana under the Interstate Commerce Clause even when the marijuana was locally grown for use in a state’s (California’s) scheme of allowing medical marijuana. “[A] subordinate jurisdiction,” huffs Vermeule, “had arrogated to itself, in effect, the power to change national policy concerning a highly controversial drug” (163).

We can look at Vermeule’s citation of Kelo v. New London, where a city government seized private homes and property so as to give them to a large corporation for development. This seems like not only a violation of property rights but also an interference with local neighborhoods. Yet Vermeule praises a passage in the opinion upholding the city’s action and praising judicial deference: “This is determination in the service of developing constitutionalism, a model of how judicial review should work” (126-27, 217n.322).

Vermeule’s praise of classical constitutional judicial review cites many cases where the Supreme Court upheld government action against claims that such action violated people’s rights, but when he cites decisions which uphold claims of rights against the government, he tends to be critical. He does support a constitutional right to life, and he defends the right of individuals to sue those accused of harming the environment. He can do so because he proclaims that rights exist in the classical tradition, though such rights are envisioned as part of the common good, not as part of a dialectic between individualism and government power.

One right Vermeule could have mentioned is the right of parents or guardians to direct the upbringing of their children including, according to the 1925 decision of Pierce v. Society of Sisters, the right to send one’s children to private school. Pope Pius XI specifically applauded the Pierce decision as an example of applying natural law (although one Catholic scholar thinks the Pope was wrong to do so). Discussing the Pierce decision and fitting it into the classical legal tradition would have helped Vermeule show how personal or familial liberty can serve the common good in many situations.

As the saying goes, to the shoemaker, there’s nothing like leather. And to the administrative-law specialist, there’s nothing like a federal agency using an elaborate rule-making process to make regulations for the manufacture of footware products. Harvard Law School produces many of our future rulers, and it may be better for us if aspiring federal administrators learn from Vermeule at least the presumptive desirability of honoring local institutions. Yet Vermeule would only be teaching them a carefully-regulated localism whose contours would be subject to the decisions of the federal administrative state. Fortunately, Vermeule’s method is not the only possible application of the classical legal tradition to this country; other versions can, and probably will be, proposed which allow a great deal more room for the freedom of individuals and communities.