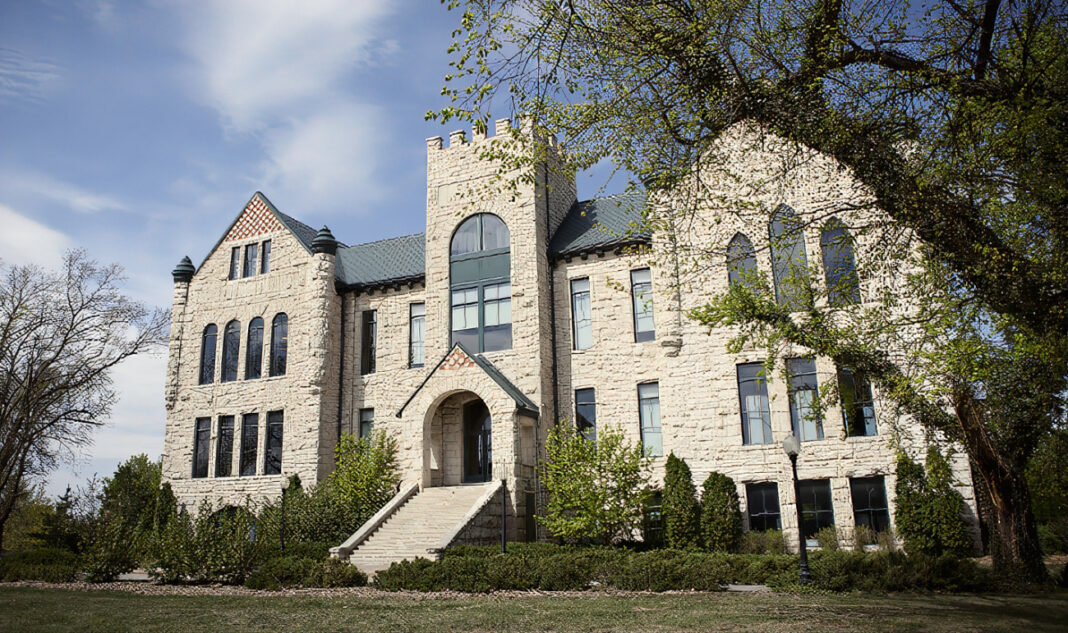 Wichita, KS. A month ago, on May 16, just two days after a racist lunatic murdered 10 black Americans in Buffalo, NY, perhaps 100 academics and educators, mostly from other Christian universities (including my own school of Friends University in Wichita), gathered at Sterling College in Kansas to learn about and discuss “Fostering Community and Hospitality on a Diverse Campus.” This is the second time the tiny Christian college of Sterling had hosted a conference which struggled with big ideas, and like the last time, I came away filled with challenging thoughts. Let me share a couple of them here.

The first impression I had as the conference got underway was surprise. Sterling is a small, conservative, racially homogeneous Kansas town (over 90% of the 2600 people who live there identify as white), and that surely shaped my expectations. That this residential college organized a conference which presented, as its very first event, a powerful plenary address by Richard Hughes, scholar-in-residence at Lipscomb University, titled “Escaping the Grip of White Supremacy: A Mandate for Christian Higher Education,” meant that I and the other participants were going to be made part of something much more theologically and politically challenging than discussions of diversity efforts in athletic recruitment (though that took place as well). Perhaps I shouldn’t have been surprised; the student population of Sterling College itself is over 25% non-white, and in that rural environment, it might be sensible to make responding to racial inequities, animosities, and misunderstandings, real or perceived, an absolute priority.

Still, the conference’s unapologetic focus on racism and aggressively attacking the obstacles which prevent the full inclusion of those of a different race by the white majority which generally characterizes small Christian colleges in the United States, from the opening address to the concluding Q&A, was striking. While there was some discussion of interfaith dialogue and religious diversity on a thoroughly Protestant Christian campus like Sterling, and some references to LGBTQ issues and sexual minorities as well, they were clearly a minor theme, almost certainly purposefully so. One of my colleagues who attended with me suggested that the conference should have been titled “Fostering Community and Racial Hospitality” for the sake of truth in advertising.

But perhaps that focus is also logical, for a college deeply committed to forming a community that has at least some element of the Biblical message at its core? There are plenty of examples of folks trying, with varying degrees of success, to extend the Christian message of welcoming the stranger, showing compassion to the foreigner, and loving those who are despised, to the whole range of identities which face hostility, exclusion, or oppression in the world today, whether in matters of language or sexuality or politics or legal status or physical capability. I don’t think any of those, however, can be as thoroughly grounded in such Christian teachings as all humanity being created in the image of God, or being commanded to spread the Good News to all nationalities, or being instructed that God’s love is incompatible with favoritism and demands equality, as the condemnation of any kind of racism can be. So when Hughes asserted that it is the special responsibility of Christian colleges and universities to correct for the historical “erasure of the story of blackness from American life,” and to “tell the stories of blackness as part of the diversity within the Kingdom of God,” he surely felt himself on very firm scriptural ground.

If you’re thinking that Hughes, with his insistence that Christian hospitality makes it necessary for those who hold to Jesus’s gospel to prioritize the stories of the racially oppressed, was essentially calling for Christian colleges to embrace progressive causes like Black Likes Matter, reparations for slavery, or the 1619 Project, you’re almost certainly correct (though they were only mentioned in passing in his heavily theological address). In fact, you should go even further than that. Hughes actually reached all the way back to 2008, and gave an explicit defense of the Reverent Jeremiah Wright, quoting from the same controversial sermons which led then-candidate Barack Obama to distance himself from the man who had been his and his family’s pastor for over 15 years. Hughes called our attention to the enormous, murderous evils which slavery, Jim Crow, and the legacy of discrimination in all its forms have visited upon people of African descent throughout American history, and, picking up on Wright’s use of the rhetoric of civil religion, he asked the American Christians in the audience if they wish to build communities that hold at their center that Kingdom of God which insists, in his words, on “turning the world upside-down,” or whether they would continue with assuming that the social, economic, and legal world delivered to white Christians in America was set up in the right way? If the latter, then we need to feel the force of Wright’s sermon “Confusing God and Government“–which climaxes in a condemnation, Hughes noted, grounded in the Second Commandment: God damn America for making herself into an idol, for acting “like she is God and she is supreme.”

Our group from Friends University lucked out at lunch during the one-day conference, and were able to sit and speak directly with Hughes and the other plenary speaker, Nathan Luis Cartagena, a Puerto Rican professor of philosophy at Wheaton College. His afternoon address, “Cultivating Mercy on a Diverse Campus,” drew heavily upon liberation theology, and thoughtfully unpacked what Cartagena called “weaponized visions” of a distinctly un-Christian condescension towards those who point to the structural and racist evils in American history and American society, masking the desire to “move on” as a kind of false “mercy.” So yes, the conference – whether through the plenary addresses or the break-out sessions on the theology of hospitality and more – had a much broader aspirations than I think any of us expected.

And that breadth, focused as it was on matters of race and the Christian message, makes up the second major impression I took away from the conference. Despite the deadly rampage which had taken place less than 48 hours before the conference began and filled the news (and which, tragically, was quickly joined by stories of multiple other mass shootings), I think I heard only a single, brief reference to Buffalo and Payton Gendron all day. The attempt of the conference presenters to capture the challenges and obstacles facing small Christian college which desire to be racially inclusive in their policies, in other words, never really looked at the problem in terms of solitary actors, racist trouble-makers, or bad apples. The analysis offered by different speakers – which included scriptural, pedagogical, historical, and theological approaches – was with the systems, presumptions, and structural forces which surround us, whether we’re talking about balancing respect for students with campus law enforcement needs, or finding sources of revenue that are less dependent upon foundations which may be resistant to the radical implications of the gospel when it comes to racial matters, or confronting how many routine assessments relied upon by universities increase racial marginalization. It is, of course, a common accusation that the contemporary university, from top-tier Ivies to flagship land-grant and research institutions to small Christian colleges like Sterling or Friends, has become a clumsy, unresponsive bureaucracy, more driven by the imperative of financial survival than by its sense of vocation. The conference didn’t get deep into that accusation – and yet, for me at least, the more I thought about how extensively my own teaching, my own textbook selections, my own student advising, my own committee work and more, are all at least partially conditioned by routinized practices and procedures that potentially reflect racial assumptions that had been put in place long before I or any other current employees at our respective schools arrived…well, it’s humbling, to say the least.

That kind of radical introspection is unfortunately often seen as inimical to conservatism: a respect for traditional truths and social norms is not compatible, the assumption goes, with this kind of structural critique. I would insist that that assumption is not correct, at least not entirely: tradition (as opposed to nostalgia-drenched “custom,” as Christopher Lasch put it), with its socially and locally fortifying power, is by no means necessarily incompatible with critique, prophetic challenge, and subsequent adaptation. But it is a common enough assumption that many conservatives have long looked upon the implicit universalizing and leveling to be found within Christianity with a quiet, but consistent, rejection of those who take the Biblical message with radical seriousness, or at least those parts of that message dealing with strangers, immigrants, foreigners, and all other sorts of minorities. And the conservatism I speak of here is not just a matter of socio-political positioning; it’s institutional as well, including the institution of the academy and even the small Christian college. (Relevant to this: a couple of weeks after the conference I spoke with another faculty member at Sterling College, who observed that perhaps one reason why the organizers of this conference felt they could put on something this potentially challenging to some of the norms of their community was because some of them were leaving Sterling for other academic jobs, and thus may have viewed the conference as a farewell challenge.)

For my part, though, the conference elicited a desire to rethink. We academics unfortunately often fall into the trap of pride (particularly of the self-involved, self-satisfying, institutional kind), and hence a humbling such as this conference delivered was probably much needed. Even if whatever racist presumptions some of my routines may reflect are entirely unknown to me, or entirely marginal in their effects they may have on students – who may be too busy trying to juggle classes and jobs and relationships and goals to think carefully about the systems which surround them – I have a Christian duty, as an educator and as a member of a Christian community, to think systematically about how I can live up, as a teacher and scholar, to the values of inclusion and equality. The fact that the politics of these questions might make for uncomfortable bedfellows on occasion, in our schools or our congregations or our larger communities, doesn’t provide an excuse from asking them of ourselves and our colleagues. If people in Sterling College, in tiny Sterling, KS, can find the resources and will to lay out these challenges so openly, however momentarily, then the rest of us ought to be able to do the same.

This post also appears on the blog In Medias Res.