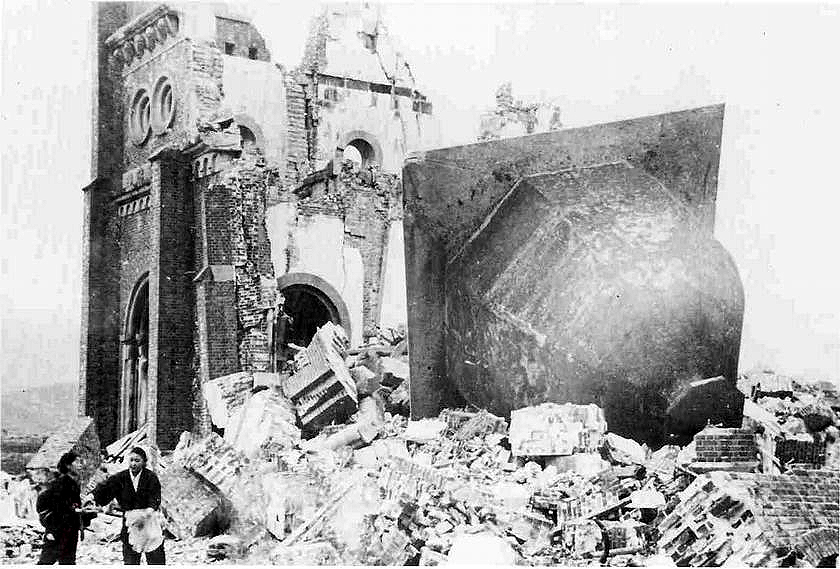 If not for the cloud cover that shielded Kokura 65 years ago today, Nagasaki would still be known first and foremost as a capital of Asian Christendom and a cosmopolitan gateway to the West. That was indeed its main claim to fame back in the 16th and 17th centuries, when Catholic daimyo were not uncommon in Japan, Christian peasantry numbered in the hundreds of thousands, and a delegation of samurai traveled to Rome for an audience with Pope Paul V. Even when the alarmed shogunate turned against the blossoming religion, cast out the priests, and drove the faithful into hiding, the city’s connection to Church life was maintained through various martyrs and a large population of furtive senpuku kirishitan – underground Christians. The former group includes the Twenty-Six Martyrs, who were marched from Kyoto to Nagasaki for crucifixion; the latter remained clandestine for over a century, baptizing and catechizing in secret while patiently awaiting the promised return of the fathers.

Of course none of this is what the city is famous for now, for when Nagasaki is mentioned it is the Bomb and not the Cross which comes to mind. Like Hiroshima, Nagasaki has become central to a debate between proletarianized, post-civilizational Tweedledees and Tweedledums, a debate which misses not only the significance of the city’s heritage but that of the bombing to boot. On one hand the use of atomic weaponry is noisily condemned by leftists possessing all the moral credibility of Stalinist poet Pablo Neruda. On the other, it is celebrated by GOP lickspittles who explain breezily that deliberate massacre of civilians is only terrorism when the bad guys do it. Look left or look right, the American mentality resembles ground zero: Sterilized, featureless, and devoid of activity.

Certainly one could never deduce from the modern excuse for intellectual life that the most scathing criticism of nuclear weapons once came from conservative Catholics such as Elizabeth Anscombe. An Oxford professor and accomplished philosopher, Anscombe founded her critique of the atom bomb upon the proposition Choosing to kill the innocent as a means to your ends is always murder. While acknowledging the fog of war, she had little patience for those who would use that fog as an excuse to chuck ethics into the wastebin:

“But where will you draw the line?  It is impossible to draw an exact line.”  This is a common and absurd argument against drawing any line; it may be very difficult, and there are obviously borderline cases.  But we have fallen into the way of drawing no line and offering as justifications what an uncaptive mind will find only a bad joke.  Wherever the line is, certain things are certainly well to one side or the other of it.

She also observed the employment of the false dichotomy fallacy on behalf of the bombing:

“It pretty certainly saved a huge number of lives.”  Given the conditions, I agree.  That is to say, if those bombs had not been dropped the Allies would have had to invade Japan to achieve their aim, and they would have done so.  Very many soldiers on both sides would have been killed; the Japanese, it is said — and it may well be true — would have massacred the prisoners of war; and large numbers of their civilian population would have been killed by “ordinary” bombing.  I do not dispute it.  Given the conditions, that was probably what was averted by that action.

But what were the conditions?  The unlimited objective, the fixation on unlimited surrender.

For the modern state, negotiated treaties are shameful.  There is no victory short of the enemy grovelling prostrate and awaiting existential reconstruction.  Consider the carping against Bush I for not sending troops all the way into Baghdad to “finish the job.”

Anscombe was hardly alone in being a conservative against the Bomb.  An equally weighty voice was that of Richard Weaver, who grew up and attended university in Lexington, Kentucky and went on to graduate work at Vanderbilt, where he encountered the Nashville Agrarian philosophical tradition. Like that of Anscombe, Weaver’s thought regarding total war strikes at unquestioned assumptions nowadays held by all devotees of the Americanist religion, Democrat and Republican alike:

The expediential argument for total war is usually expressed very simply: “It saves lives.” I have seen Sherman’s campaign in Georgia and the Carolinas defended on the ground that it brought the war to an end sooner consequently saving lives; the dropping of the atomic bombs upon Hiroshima and Nagasaki has been excused in the same way.

This argument, however, has a fatal internal contradiction. Under the rationale of war, the main object of a nation going to war cannot be the saving of lives. If the saving of lives were the primary consideration, there need never be any war in the first place… The truth is that any nation going to war tells itself that there are things dearer than life and that it proposes to defend these even at the expense of lives.

As if to emphasize that his criticism is not coming from the left, Weaver makes the now-taboo concept of discrimination a central element of his attack upon decidedly indiscriminate military doctrines. Furthermore, he contrasts the mechanistic, utilitarian mindset with older, more traditional Western ideals:

Although chivalry today is the butt of jokes, it was in fact a magnificent formal development… [it was] in reality an assertion of the brotherhood of man which makes the abstract, windy, and demagogic apostrophes of the present day to brotherhood look empty… The code of chivalry declared that even if you have to fight your fellow man, this does not mean that you place him outside the pale of humanity, nor does it mean that you may step outside yourself.

Even in warfare, and whether you get the best or the worst of it, you conduct yourself in such a way that civilization can go on.

Civilization rests upon the sacred. Thus it is as grimly appropriate that the first atom bomb test was sacrilegiously codenamed “Trinity” – as in the Trinity – as it is that the Fat Man made an almost direct hit upon Urakami Cathedral, the most sacred spot in Nagasaki.  It is this point that handwringing humanitarian moralists typically miss: The totalitarian horrors of modern war come from our hubris and impiety, not from any deficit of Lennonesque sentimentality.

An alternative illustration of the impious zeitgeist is the destruction of the Benedictine abbey at Monte Cassino. Founded in 529 by St. Benedict, the time-hallowed abbey was (erroneously) suspected by the Allies of being an outpost for German troops, and was therefore designated a target for a devastating strategic bombing raid.  While some had misgivings, an American artillery officer expressed the attitude which eventually carried the day:  “I don’t give a damn about the monastery. I have Catholic gunners in this battery and they’ve asked me for permission to fire on it, but I haven’t been able to give it to them. They don’t like it.”

The website of the reconstructed abbey puts the matter in different terms: “[T]his place of prayer and study which had become in these exceptional circumstances a peaceful shelter for hundreds of defenceless civilians, in only three hours was reduced to a heap of debris under which many of the refugees met their death.”

Ironically, once the monastery was obliterated the German hand actually grew stronger, as their forces moved in to find excellent defensive positions among the rubble.

A Southern boy, Walter Miller had been a crewman aboard one of the bombers that had destroyed this one-time home of St. Thomas Aquinas. The tragic Miller would long be haunted by his role in the mission against Monte Cassino, which may even have contributed to his eventual suicide in 1996. Yet during some years of clarity following the war Miller was to become an accomplished science fiction writer of penetrating vision. Specifically, his mesmerizing post-apocalyptic novel A Canticle For Leibowitz draws upon wartime trauma to depict a new dark age following global nuclear conflict.  The story is chilling, yet at times humorous and even optimistic as it chronicles the Church’s labors to preserve and renew civilization.

The hagiography of a future scientist-turned-saint named Isaac Leibowitz frames the novel, and seems particularly appropriate to this day:

And the prince smote the cities of his enemies with the new fire, and for three more days and nights did his great catapults and metal birds rain wrath upon them. Over each city a sun appeared and was brighter than the sun of heaven, and immediately that city withered and melted as wax under the torch, and the people thereof did stop in the streets and their skins smoked and they became as fagots thrown on the coals […]

Poisonous fumes fell over all the land, and the land was aglow by night with the afterfire and the curse of the afterfire which caused a scurf on the skin and made the hair to fall and the blood to die in the veins.  And a great stink went up from Earth even unto Heaven. Like unto Sodom and Gomorrah was the Earth and the ruins thereof, even in the land of that certain prince, for his enemies did not withhold their vengeance, sending fire in turn to engulf his cities as their own[…]

[T]here was pestilence in the Earth, and madness was upon mankind, who stoned the wise together with the powerful, those who remained.  But there was in that time a man whose name was Leibowitz, who, in his youth like the holy Augustine, had loved the wisdom of the world more than the wisdom of God. But now seeing that great knowledge, while good, had not saved the world, he turned in penance to the Lord[…]

In passages written in a more contemporary style, the novel deftly explores the themes of pride and folly without straying too far into the excesses of didacticism.  In one striking scene a secular scholar expresses his skepticism of legends about what humanity was like before the nuclear holocaust.  Casting his gaze upon a degenerate, vicious and illiterate peasant, he demands of the priest with whom he debates:

Look. Can you bring yourself to believe that that brute is the lineal descendant of men who supposedly invented machines that flew, who traveled to the moon, harnessed the forces of Nature, built machines that could talk and seemed to think?

Could you believe there were such men?

Plaintively and insistently, he asks:  “How can a great and wise civilization have destroyed itself so completely?”

Those curious about the priest’s answer will have to read the book for themselves.  It’s not a bad question, we must admit, for it prompts us in turn to ask what greatness and wisdom actually are. Such chains of questioning are a prerequisite to any renewal of civilization here in the ruins.