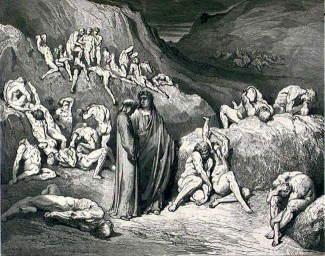 From a sign outside of the Wakefield Hills Middle School, West Warwick, RI

EPIC SEX!
GET IT, GIVE IT, AND GET IT AGAIN!

From the cover of a recent issue of Chaopolitan Magazine

To please my son, innocent of the cruelties of our time, we turned on the television a few minutes before midnight on New Year’s Eve, to see the “ball” in Times Square fall.  There were a million people down below, waiting for the inexorable turn of the temporal odometer.  I’m not sure what they were celebrating, but the frenzy seemed proportionate to the triviality and impersonality of the moment.  When the last tick of the clock arrived, the band played that song whose words nobody really understands, but which I will translate for the age:

Now my mind returns to that lovely song by Prudentius, which in the self-forgetfulness of joy celebrates the birth of Jesus.  Unlike the tick of the clock, the moment of Jesus’ birth does not arrive in complete abstraction from all things most profoundly human, nor does it leave with the celerity of the sweep second-hand on a clock.  It is not secular, in the deep sense of that word, suggesting one thing following upon another.  It stands above the world; it beats in the heart of the world.

There’s nothing hectic in the praise that Prudentius calls forth.  All the ages of man are brought in communion, with the angels and the saints that have gone before us.  The young are not battering down storefronts, the elderly are not shuffling down the halls of nursing homes in padded slippers.  The boys and the girls are here, and their songs are guileless, not barbed and angled.  We can almost hear the ringing of the trebles, the soprano women in rich vibrato, the young men belting out their clear tenor, the old men rumbling low; and all is cheerful, wondering, solemn and gladsome at once.  It is free: it arises both spontaneously, and in decorous order, from the fullness of a generous heart.

That song, I know, cannot be sung at the Wakefield Hills Middle School.  Not that, nor anything like it.  Not in contemporary America, united solely by the conviction that nothing can unite us.  But where there is nothing to celebrate and no one to worship, something must occupy our attention.  The throne will not remain empty.  In America, the something is the itch.  You must be at Times Square.  Why?  What does it mean?  You must watch the television extravaganza.  Why?  What, in that brew of folly, narcissism, mass marketing, and noise is worthy of honor or affection?

The magazine cover splays the truth out naked before our eyes.  There’s no person there, no one who needs love, no one sad or shy or confused; no warmth, not even in sin.  Human eros, as opposed to the urges of a brute beast, bears the intimations of eternity, of a love that does not fail.  But this does not rise to the level of eros.  It hardly rises to the level of natural hunger.  The degenerate rich in the days of the Roman Empire would binge and purge and binge, for a sickly pleasure in eating, and for distraction from the emptiness of their lives.  The cover encourages the same bingeing and purging, get and give and get, what?  Some undefined object.“Pick me up, open me,” it whispers, wheedling.  “I hide the secret of epic sex!” The adjective, once filled with literary and human meaning, is empty, to be filled with that sub-hunger, that terrible desire for something, anything, to desire.

That is what prurience is all about.  It is, literally, the instigation of an itch.  It doesn’t have to be about sex – but in our mass marketing, sex is the most common virus for the inception and the spread of the rash.  The itch brings no joy.  We know, when we are scratching some scrofulous dermatitis, that we’d be better off not scratching – but we can’t help ourselves.  To think about the itch, without scratching, would drive us mad.  It is why Dante, that cunning psychologist, punished the pettiest of his liars, the bunko artists, with a never-subsiding itch, the sufferers raking their flesh as if they were scraping the scales off a pike.  They feel a ferocious moment’s relief, burning in frustration.  The prurient cannot move an inch without the tickle, the prick, the bristle.

He says, “I won’t scratch that itch!  I won’t think about it.  I’ll count to ten,” but none of those tricks work.  It is the colossal failure of some (not all) calls to abstinence, when there is nothing grand or beautiful beyond to stir a genuine human longing.  For the call to abstinence, detached from the deepest human realities – and detached from a community wherein one might hear such songs as Prudentius composed – is nothing more than a call not to scratch the itch.  It acknowledges the itch.  It reminds us of the itch.  It allows the itch to creep.  It permits the prurience of magazines, library books, advertising campaigns, politicians, video games, all the little spikes and prickles of a consumptive economy, coughing and coughing.  Then it says, “In all these other ways you may debase yourself.  You may scratch here, here, here, and here, but not here.”

And now we turn to the public schools, and many a private school, the insanatoria where the law of the itch is taught.  “Protect yourself from these diseases,” our children are advised, because they must yield to the disease they have already caught.  There are human choices only around the edges of the rash – how to scratch, not whether.  That in part explains curricular choices for high school literature courses.  Where the itch has set in, it must be scratched; where it has not set in, it must be introduced.  It also explains choices for stocking the school libraries with “young adult” books about vampires, zombies, spicy fornicators, and admirable murderers in this or that miserable dystopia.  The school is far from the hymn by Prudentius, but it snuggles up to the covers of Self, Glamour, Elle, Maxim, Us, Scrape, Rip, Itch.

I understand the challenge teachers face.  You have thirty children who have been itching and scratching for years.  They skitter from video game to video game.  They don’t read.  If they do, it’s our puerile newspapers, or sniggering celebrity magazines, or “novels” whose dialogues range from the grunt to the sneer.  These young people are precociously senescent.  They cannot be moved by the feelings of Mr. Knightley for Emma.  They need scratching.  But is the teacher always better off?  Hence the choice for “controversial” works, or “relevant” works, to spur real “discussion,” because only a text laced with obscenities and profanities, or cruelty, or perversion, will do.  That is called being on the “cutting edge” – the scratching edge.

How to raise children who would want to sing that hymn by Prudentius?  Who delight in innocence?  Young men so moved by the beauty of a woman, they would not wish to sully it with actions no nobler than those of dogs rutting?  Youths who still possess youth, which lends them a frolic childlikeness and a wisdom beyond their years?  How to raise children who can sit with a good book, and read?  Who can walk outdoors and enjoy the beauty of weeds and sparrows?  Who have no compulsions – who don’t have to buy the latest this or that vanity?  Not bound to the instant urge, wherever it may be found?  That is the educational question of our time, unnoticed by technocratic utilitarians left and right, by the “progressives” who have to move, move, move, who knows where, and even by lovers of the humanities, who don’t wish to acknowledge the disease, because we all infected.

The itch is but the poor, measly counterfeit of the quest: the liberating gift of oneself, to find something of incomparable worth and beauty.  More to come.