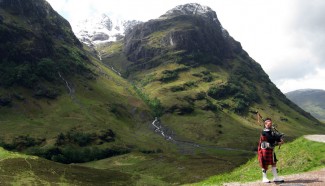 Rummaging about in an old book store this summer, I found a copy of a Community Song Book, printed in Canada and falling apart, apparently from long and constant use.  The book was filled with genuine folk songs, that is, songs beloved by the people and passed down from one generation to the next, because they were beloved.  There was quite a broad range, too, in this little book.  There were anthems, and since this was Canada, that meant not only O Canada, its lyrics unexpurgated by the thought police, but also the boisterous Rule, Britannia and The Marseillaise.  There were sweet love songs, like Annie Laurie and Loch Lomond and Juanita.  There were gently mournful songs of sorrow and loss; silly playful songs; songs from the American south, from Hawaii (Aloha, Oe), from all over Europe.

Some of the lyrics were written by poets of the first rank: Ben Jonson’s Drink to Me Only with Thine Eyes; Robert Burns’ Auld Lang Syne.  Others were written by some unknown poet, or were like sudden springs bubbling up out of the common heritage of music.  The melodies covered the same range, from the haunting minor key melodies of the negro spiritual, to military fanfares, to the simple bumptiousness of comic songs (Old Dan Tucker).  Dvorak and Schubert find a place beside Stephen Foster and that busy fellow, Composer Unknown.

The foreword to the book says that there is nothing so vital for bringing a community together as is song – community singing.  That is why the music is scored for four-part harmony, so that really experienced community singers could venture forth into the fine complexities of soprano, alto, tenor, and bass.  The people, then, would experience the music not only by hearing, but by singing, and not in unison, but in union.  “Various voices make the sweeter song,” says Dante, explaining the differences in rank among the blessed souls in heaven; and so too, in the choirs that used this book, young and old would find their harmonies, boys and women and men, and all classes of people.  That explains, too, the prominence of the most important kind of song in the book, the hymns: Nearer, My God, to Thee.  For people are most truly united only from above, never from below.

It’s with a shock, then, that we turn to the lyrics of the planet Obsessus, sublingual coos and grunts, without coherence, sweetness, grace, solemnity, mirth, or humor; entirely focused on the self, valuing the “you” only as a provider of commodities: what a girl wants, what a girl needs.  On Obsessus, not many people play musical instruments.  They don’t have community song, in part because they have no community, and in part because they have no song.  They don’t actually listen to music, although they believe they do.  (I owe this insight to the brilliant Ken Myers, of Mars Hill Audio, who has visited Obsessus and taken careful notes of the anticulture there.)  They do not sit quietly and attend to it, as one might attend to Dvorak’s New World Symphony – which Dvorak himself could write only because he had visited America, when there was an America, and gotten to know her people, and had heard their songs.  They play it as noise to accompany something else they are doing, quite often something that also bears the character of a compulsion – they are working at a job that bores them, they are “hooking up” with someone whose name they didn’t catch, they are jogging to lose those last five pounds or trim off that last inch of the commercially decried “unwanted belly fat,” or they are cramming food or facts or forms to fill out.

They are, on Obsessus, using “music,” or at least a canned array of sounds, as a means to scratch an itch.  It’s as if one were to place a mechanical rake on the back of one’s chair or brain.  The use of the music reflects both its subject and its form.  These are extraordinary narrow.  They cram those who cram, into the tight anxious space of narcissistic self-inspection – but never introspection.

Which brings us back up to earth, the planet whose night skies, unlike those on Obsessus, are open to the heavens. The man who first sang of Annie Laurie held that young lady in his mind as the epitome of beauty.  He remembers himself only in relation to her; whereas on Obsessus the singer remembers the lover only in relation to the self.  He can see her fair hands and her neck, he can recall her gentle voice.  He is far away from her, he may never see her again, but for her, for bonnie Annie Laurie, he would lay himself down and die.  He doesn’t intend that as a boast, but in that lovely final line – and its surprising full-octave leap, on the syllable lay – he rises in our esteem, precisely for his devotion and his humility.

Let me give another example of humanity on earth, not machinery on Obsessus.  It’s of a Catholic boys’ school on the top of a mountain.  The boys live there.  They all learn to sing songs – sea chanties, ballads, hymns, Gregorian chant.  They all serve at the altar.  They play rugby and soccer, outdoors, whenever the weather will permit, and roam over the mountain in their free time.  They read good books.

They also learn to juggle.  One of their teachers caught the idea, and after a few years, the boys became wondrously nimble and clever at it, inventing all kinds of things to juggle, riding unicycles, singing, tossing bowling pins or torches or baseballs or knives, and passing their know-how along to the younger boys, just as they’d done on the playing fields and at Mass.

One summer, five or six of the high school seniors flew with their teacher to Barcelona.  They brought their juggling equipment, their bicycles, their camaraderie, their songs, and their faith.  What they did not bring was money.  They then proceeded to travel on a pilgrimage, a quest, from Barcelona to the shrine of Saint James in Compostela, hundreds of miles away, across the foothills of the Pyrenees.  How did they eat?  What did they drink?  Where could they lodge?  They sang and juggled for their food and their rooms.

Place the planets side by side.  Here is Obsessus.  It’s a train car.  A pinched young person sits next to another pinched person, but nobody speaks.  He has a plug in his ear, listening to the scratch.  He is staring at a hand-held computer.  His knee twitches, annoying the person beside him.

Here is earth.  Here are the boys on their bicycles, chatting and laughing.  They have to stand up to pedal, because the Pyrenees are steep and mighty.  The Spanish sky stretches out above them.  Their friendship is rooted not only in what they sing, but the God to whom and for whom they sing.  They have all come from the same small school in Pennsylvania, but they are all going on a quest to the ancient Galician church, where millions of pilgrims have gone before, but not as anonymous millions – rather as human beings, penitent, joyful, grateful, sorrowful, young and old, men and women, the brave and the timid, the healthy and the dying.  They are themselves a real community, and are a part of a community that stretches back for hundreds of years.

Their songs are as open and clear as that sky.  All their songs, whether sea-chanties or ballads or hymns, are songs of love, and breathe the fresh air of the quest.  How weary, stale, and flat, by contrast, are what passes for love songs on Obsessus.