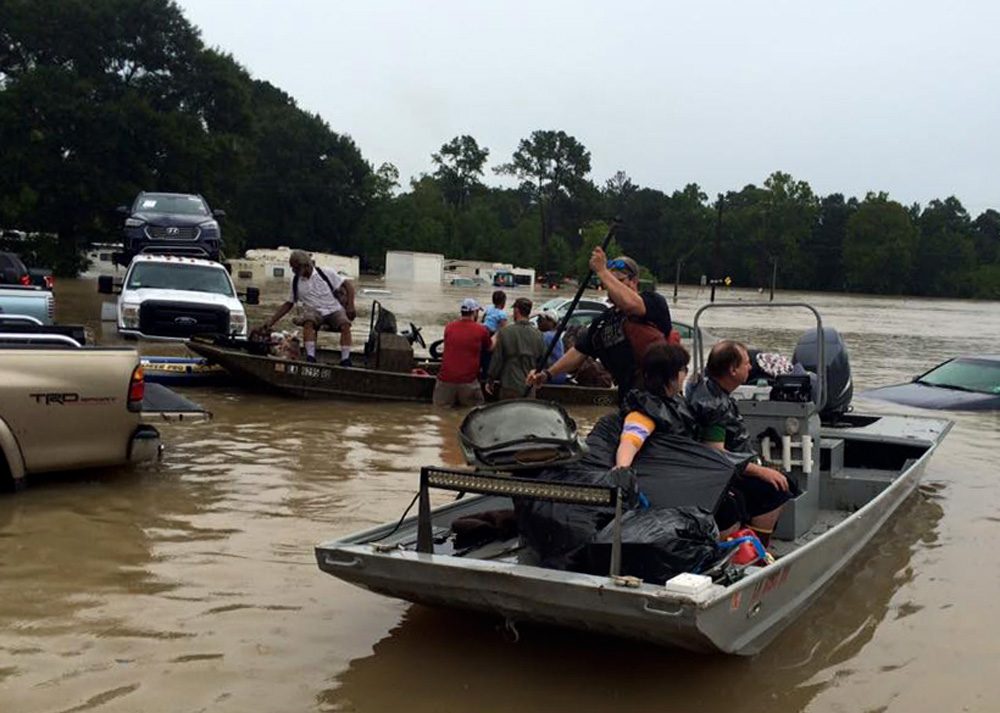 This past week, the Baton Rouge district attorney announced he would not press charges against the two police officers who shot and killed Alton Sterling when attempting to arrest him. A year-and-a-half beyond the event itself, this announcement brought a mixture of uneasy closure and unsewn scars, an ending to the tragedy’s narrative and renewed reflection on that narrative.

Such an unfinished end is an emblem of a fallen world and brings reflections that themselves do not satisfy. Anyone who strives to be a Christian ought remember the Apostle Paul’s admonition to “be subject to the governing authorities,” since “rulers are not a terror to good conduct but to bad.” But those with conservative disposition ought also lament the transformation of the police officer’s ideal of Andy Griffith to The Punisher, a shift which has led to the deaths of many men, black men in particular. And we may, like Ed Tom Bell in No Country for Old Men, plead for that time when “some of the old-time sheriffs never even wore a gun.”

The tragic event and its aftermath affected me somewhat personally as I am a native of Baton Rouge. I was visiting St. Olaf College to study Kierkegaard for a few weeks when the news broke. I thus watched footage of the aftermath, the protests, the riot police, and the tear gas from afar. I saw photos of acquaintances and colleagues—recognizing these faces in the news footage changed the way I recognized news footage itself. But this familiarity juxtaposed sharply with what were, for the most part, anonymous faces in the crowds, outsiders who had come from elsewhere to protest for change and justice. Shouts, signs, and sloganeering—almost all of it foreign to Baton Rouge and even the state of Louisiana—filled the city. A group of new Black Panthers apparently too radical for the old arrived with stockpiles of guns, and the police responded, made arrests, likely some fair and some unfair, and all fell into a chaos reminiscent of the Ferguson protests two years ago. And then two black nationalists independent of each other killed eight police officers and injured others, the first of the shootings happening in Dallas, 400 miles away, the latter back in Baton Rouge. Those who had flooded into the city to protest then returned from whence they came, leaving only discarded litter and signs and a city with now four men—Alton Sterling and three police officers—dead, and its citizens in disarray.

The dissipation of that flood of protesters only allowed a new flood to take its place. In August of 2016, the Great Flood—a thousand-year event, by scientific measure—saturated parts of the East Baton Rouge, Livingston, and Ascension parishes, in some areas destroying over ninety percent of homes. Tragedy wrought by humanity was not enough for one summer in south Louisiana, as a societal catastrophe was followed by what seemed a cosmic retribution. And like the former tragedy, the fact of the flood brought unanswerable questions. One cannot discount the contributions of climate change to the event, and those with perhaps Calvinistic sense may believe it to have been the punishment of Providence. But does every natural disaster owe itself to climate change or mankind’s failing?

The aftermath of the Great Flood, however, could not offer a starker contrast to the aftermath of Alton Sterling’s death. This time, I was there, and I spent the day after the flooding driving through Baton Rouge with a friend who was trying to reach his parents in the nearby (and totally flooded) town of Denham Springs. I saw entire stretches of Florida Boulevard underwater, houses near O’Neal lane wading in mud. But I also saw mobs of citizens with fishing boats both large and small, pirogues, and even kayaks in tow looking to rescue family, friends, and total strangers from their flooded homes. Here I witnessed firsthand the ‘Cajun Navy’ in action. In the following days I served as a volunteer chaplain in the Red Cross shelter at Celtic Studios. The first day it was overstuffed with cots and people—black and white and brown, rich and poor and middle-class. As someone who did little more than talk to people, I could observe how others did the actual work. It was utter chaos, but of the kind totally opposite to what held national media attention in the previous weeks. Volunteers set themselves to work without so much as checking in for assignment, while donated food, water, and other necessities spread among the sheltered, and National Guardsmen kept peace, and government and Red Cross workers somehow directed it all into ‘spontaneous order.’ The victims themselves showed little sign of despair, and everyone comingled in a peace that almost rendered military presence unnecessary. As the week continued, people trickled out of the shelter, thanks to the generosity of friends and family who offered quarter, and when the week ended, the shelter was almost empty.

All this was undergirded by voluntary associations. Churches, Boy Scouts, the Red Cross—Burke’s ‘little platoons’—almost overwhelmed the relief effort. But far from causing a rift between government and community, as is often imagined in our polarized politics, the volunteers actually allowed the government workers—FEMA, the National Guard, local police, etc.—to be more effective in their response to the aftermath. The government’s work of immediate relief was well coordinated, and the bureaucratic disaster of Hurricane Katrina did not happen this time.

Louisianans did not seem to care that our plight—and the heroic response to it—received little attention from the nation which had given such reporting and scrutiny to the state’s darkest hour—an hour with few heroes and little resolution—just weeks before.

Notably absent from the relief effort were those who had come from near and far corners to protest and riot and garner national media attention just one month before. Little news coverage followed the natural disaster, and thus elected officials and those campaigning to become elected officials—both Democrat and Republican—were slow to devote their attention to the event. There was some grumbling among the Louisianans who were performing heroism without much notice and were not blind to the irony between the Alton Sterling episode and this Great Flood, but even the occasional wink and snarl towards those far-off did not deter from the overall mood of persistent joy, which heightened that irony even further. Louisianans did not seem to care that our plight—and the heroic response to it—received little attention from the nation which had given such reporting and scrutiny to the state’s darkest hour—an hour with few heroes and little resolution—just weeks before.

Slowly but surely time summoned the ordinary back as the floodwaters receded from immediate memory: the FEMA trailers arrived, complications and the question of funds for rebuilding ensued, and Louisiana returned to its inefficient normalcy so characteristic of our place. But for that one kairotic moment, all of the state had united into one being, and in the midst of what should have been a postdiluvian hell there blinked a glimpse of new earth, if not new heaven. Even the tragedy of the shooting of Alton Sterling and its resulting protests and violence faded while the strength of the community came to the fore.

The lessons from these two intimately connected yet opposite events are innumerable, and the summer of 2016 in south Louisiana should occupy the pages of punditry and history for some years to come. For my part, I learned a few that I still cannot shake. The role of the media in such events was jarring. If Kierkegaard was right that men demand freedom of speech as compensation for the freedom of thought they rarely use, then the ubiquity of the press may be a similar compensation for the freedom of action rarely used in our day. The protests in July generated great press, but little productive action. The change for which the protesters earnestly hoped and strove amounted to little more than attention. But the absence of the press or any ‘national conversation’ in August did little to dampen the real relief effort committed by real people. The difference between these two events in respect of media attention and real action cannot be exaggerated.

Second, those who worry that our current age renders the ideals of the local impossible to realize can rest assured. This imperfect community had been rent by weeks of social media scourging and militarized policing, only to respond in unison to a one-thousand-year flood. The fact that the Cajun Navy exists after the shooting of Alton Sterling counters any fatalism that fears the iPhone and the abstract have inevitable strangleholds over the future. Perhaps it is a last bastion, and even now it is certainly not a ‘perfect’ one (and a glance at any ‘objective’ ranking of the state is quick to prove so), but Louisiana has proven to be an example of local strength in spite of its very real problems.

The Hand of Providence is strangely at work, though we know not how, in this history, even this world in which my people and place face terrible tragedy.

Lastly, the unison of these two events has given me a strange sense of Providence’s guidance, one not easily shaken. It was of the sort that “sends rain upon the just and the unjust” to cleanse the land and the people therein. Such Providence haunted the first pilgrims who had come to the country and could not help but paint their journey in biblical light. The slaves who had also been brought to America, when converted to Christianity, then saw their misery in light of Israel’s bondage in Egypt, and in turn kept hope for an imminent Exodus on “some glad morning” when they would “fly away.” Abraham Lincoln likewise could not help but think that the Civil War was God’s harsh but loving discipline to the American people, a discipline that eventually would cleanse the land of its cruel slavery and lead to renewed kinship. Often this notion of Providence has devolved into mundanities like “god has a plan for everything,” which offer little comfort. But the denunciation of such caricatures risks ignoring the deeper idea that the pilgrims, the slaves, and Lincoln had in mind when invoking the divine in the hardships of their day: the Hand of Providence is strangely at work, though we know not how, in this history, even this world in which my people and place face terrible tragedy. And though we may never grasp its full working—and humanity’s folly lies in trying to do so—we may nevertheless glimpse traces of that Hand, if only in one moment. I saw those traces one summer in south Louisiana. So now, nearly two years after the experiences of the summer of 2016, I must join those American forebears in holding that God cares for and involves Himself in these particular people, in this particular place.

Forgetting vs. Overcoming: Nietzche on Abuses of History and the 1619...