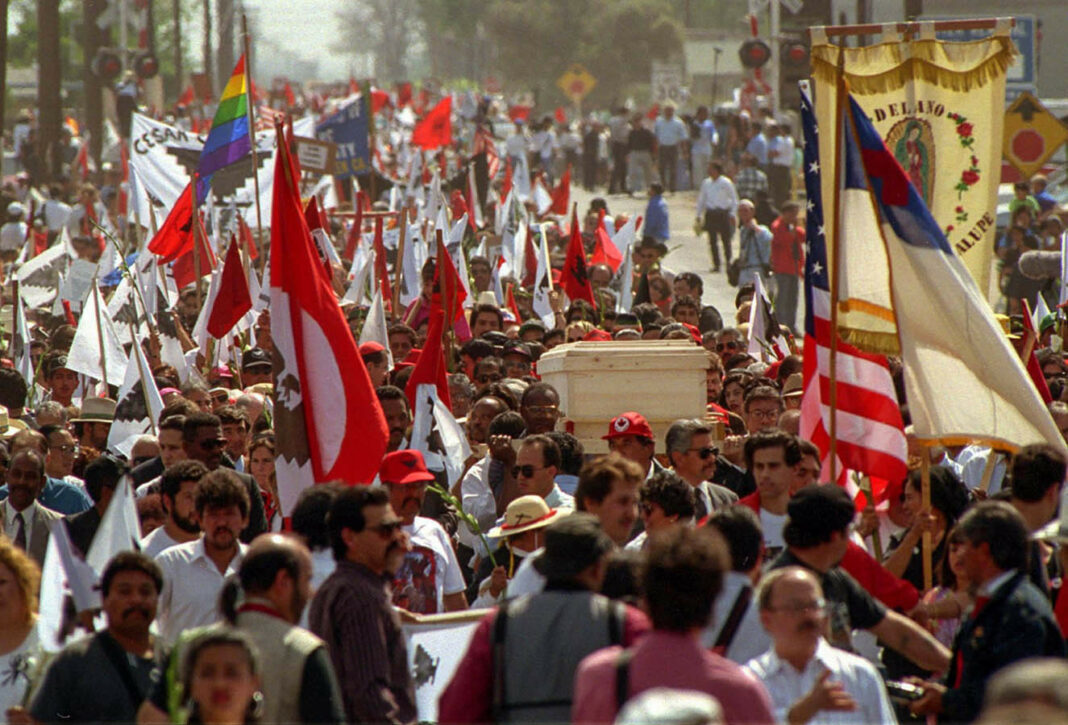 Indianapolis, IN. Highway 99 stretched out before the black Jaguar sedan as far as the eye could see, straight as a taut string splitting the San Jaoquin valley between East and West. We exited outside the sleepy farming town of Delano and headed towards the property of Cesar Chavez. A mile or two from the destination the two-lane rural road became clogged with cars maneuvering to park on the shoulders and pedestrians walking on the edges of the pavement. The funeral of Cesar Chavez was a rock concert sized event.

My boss, John, kept driving, and the woman in the front seat, Patricia, and I became anxious about parking. Cars and people were everywhere, and as we neared the Chavez compound, every strip of open ground was taken by a hodgepodge of vehicles. Crowds of people—some carrying the red and black UFW flag, some the flag of Mexico—threaded their way through the cars, buses, pickup trucks, and vans parked askew alongside the roadway.

As we approached the front gate, John threw a folded-up copy of the Times onto the backseat and told me to hold it up as if reading, covering most of my face and body. Patricia, in on the play, swapped sunglasses with me and I slipped on her oversize dark shades. We pulled up to the California Highway Patrol detachment guarding the gate and John rolled down his window.

“Yeah, . . . got the attorney general. Where do you want him?” he said in the understated drawl of a fellow police officer. John had retired from the LAPD as a staff lieutenant. The CHP looked to the back window to verify the passenger, and John rolled down the tinted glass just a sliver to expose the newspaper, glasses, and top of my head.

We were directed to park in the VIP section immediately adjacent to the main tent, and our arrival was forwarded via radio. We were met by a staffer and directed to seats in the fourth row, where I supposed the VIP’s would be seated. Having the “advance man” training, I suggested we peel off the coats and ties, leaving them on the backs of our seats, and blend in with the shirt sleeves and jeans as best we could. Patricia re-connected with her friends among the MAPA (Mexican-American Political Association), which her father had co-founded, and LULAC (League of United Latin American Citizens) as John and I wandered around to get the lay of the land.

Mariachis were playing and Mexican folk dancers were performing as people milled around. As the funeral procession neared, a hush fell over crowd. Cardinal Mahoney, who had a long association with Chavez dating back to his days in the archdiocese of Fresno, led the procession followed by Jesse Jackson, whose arm was in a sling, and a gaggle of other self-promoters. As the plain pine coffin was brought in and placed before the altar, the politicians filled in the seats around us.

As most of the twenty thousand mourners stood in rapt silence, I caught a thread of conversation bouncing around the congressmen and state officials. It was laced with expletives and had to do with Jesse Jackson. The gist of the complaining was that the politicians were not allowed to act as pallbearers for more than a hundred yards or so before being rotated out for another poll to have his opportunity to be photographed with the remains of Chavez. Jackson, on the other hand, had his arm in a sling and could not be a pall bearer, so he positioned himself just ahead of the casket, thereby guaranteeing his inclusion in all but a few photographs and news recordings.

The consensus among the elected officials was that Jackson was not injured, and they had been outsmarted and outflanked by a master of political showmanship. A photograph of a pol carrying the coffin of Cesar Chavez could be worth thousands of fundraising dollars and was priceless on the evening news. They were upset with themselves for underestimating how unscrupulous and creative Jackson could be.

As the service wore on, I found myself uncomfortable with how a funeral mass, an event for the faithful to pray for the soul of the dead, had been transformed into a political event. The sacred rites were leveraged to promote political careers and causes.

After the mass and the obligatory backslapping and glad-handing among the leadership class we left for the two-and-a-half hour drive back to Los Angeles. I did not know, and had never met Cesar Chavez, but Patricia was friends with him and had been for many years, so I voiced my feelings regarding the funeral mass.

She burst out in her trademark laugh, loud and unrestrained, and explained that Cesar would have loved it. He would have loved to see the politicians queuing up to be photographed carrying his coffin and Jesse Jackson kneeling before the altar during the liturgy of the Eucharist; those who had marginalized his work and sacrifice were paying homage in his death. He, after all, was a political animal as well.

She explained that Chavez’s boycotts and strikes were largely ineffective, he failed in his attempts to end illegal immigration, and his campesinos never achieved the wage gains they sought. He was only successful in improving the working conditions for field workers through his relationship with Governor Jerry Brown who created the Agricultural Labor Relations Board.

Patricia went on to explain that Chavez knew that with access to limitless numbers of illegal workers, the growers would always have the advantage over labor. He also came to realize that there was a political shift within the Democratic party away from organized labor and towards the interests of Big Agriculture and big business in general.

For years he had fought illegal immigration, even sending his lieutenants and foot soldiers to the border to intercept and assault what Chavez himself called “wetbacks.” Chavez learned economics the hard way. He learned that the supply and demand of labor will always favor big business if the supply of labor is inexhaustible. His campesinos could never achieve higher wages if they could easily be replaced with a wave of new illegal immigrants.

According to Patricia, Chavez knew which way the wind blew and by the late 80s had given up on the Democratic party as an ally. He had been outsmarted and outflanked by a new wave of democrats who mastered the art of pandering to big money interests and saw illegal immigration as a key to their success.

Chavez’s struggle illuminated a stark reality: In an attempt to help everyone, you help no one, and professional politics is about helping no one. If policies are pursued to help all illegal immigrants, in limitless numbers, the benefits of the returns will diminish for everyone except those who profit from diminishing labor costs. People at the bottom, people working in the fields, the car washes, the restaurants, the construction sites, and other service industries will always be under the boot because the value of their labor will always diminish.

He also knew that politics is not about helping anyone. Politics is a theatrical production staged to persuade voters that they, and the politicians they support, are right, and true, and virtuous. The purpose of the performance, its telos, is not to craft or perfect policy; it is to accrue power. Chavez knew these realities, and perhaps his funeral was his last, best opportunity to control the stage and direct the players.

Joe Biden has a bust of Cesar Chavez in the oval office and I wonder how the soul of Chavez finds this. Chavez was a man of great faith and sacrifice who worked tirelessly and lived ascetically and now his bust is displayed in the highest office of the land, occupied by a man who lives luxuriously and has successfully accrued power. I wonder if Chavez would be honored or amused.

Another Option for Christian Politics