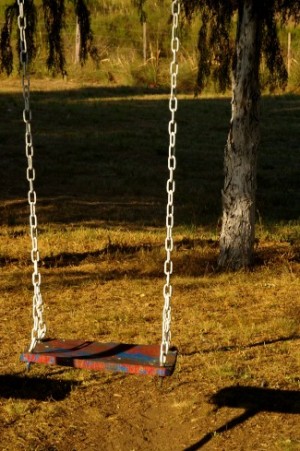 The child’s language is melodious.  The words hide and protect themselves in the melody – the words that have come shyly out of the silence.  They almost disappear again in the silence.  There is more melody than content in the words of the child.

It is as though silence were accumulating within the child as a reserve for the adult, for the noisy world of the child’s later years as an adult.  The adult who has preserved within himself not only something of the language of childhood but also something of its silence, too, has the power to make others happy.

I know a boy – he is a young man now – whose parents took him to spend the summer every year with their kinfolk in the Spanish countryside.  That was, outside of the village, a place of vast silences, the dry plains, the sun, the hard shadows of rocks, the scrub olives, the lizards and the birds and the flies.  He would leave home in the morning with a small lunch, and journey out into that silence, not returning until suppertime.  Then he would take out his saxophone and play, and the girls from the village would gather round, and it was as if the great gift of the rocks and hills, their mysterious being, had found a voice in that horn.  He did not so much break the silence as give it form and extend it to others.

I know a boy – he is long past boyhood now – whose earliest memories are of silence.  For five years, before kindergarten, he dwelled in the silence of his home.  I see him in my mind’s eye, the boy about to turn five, lying on the floor, etching shapes and words on the cardboard that came from the dry cleaner’s with his father’s white shirts.  He is in a world, making a world.  The only books in the house are a Bible and his mother’s missal.  He has read much of that book, with its red-edged pages, its leather cover, and its aromatic scent.  He cannot remember a time before he could read.  If a book could smell like the incense-smoke of prayer or of pure silence, this book does.  His mother is pottering about the kitchen, cooking the supper.  She is singing softly to herself.  The baby sister is napping.  There is a third child in the house, but he is the quietest of all, sheltered in the mother’s womb.  The boy knows a little about this, in the same way that he knows there is an ocean he has never seen.  It is there.  He continues to write and to draw.

In silence, the young Wordsworth rowed out onto the big lake, and saw the mountain looming up against him, a vast intimation of a presence in the world that is beyond human naming.  In silence, Michelangelo lay upon the scaffolding in the Sistine Chapel, sheltered from the noisy streets below, and painted the unpaintable silence of Adam, the moment before he received from God the breath of life, and he became a living soul.

When Cordelia hears the noisy protestations of her sisters, she turns to the secret springs of life within her:  “What, shall Cordelia speak?  Love, and be silent.”  She will not, even at the prompting of her foolish father King Lear, try to speak what cannot be spoken.  Such were the words of lovers, in times where true childhood had time to flourish.  They were like gentle attempts to touch a hand to a hand.  They were reticent before the mystery.

“Proper education and proper teaching,” writes Max Picard, “are based on the substance of silence.”  For silence, he asserts, is not an absence, but a presence.  It is noise, rather, that is the absence, both of the significant word and of the fullness of being that silence allows us to hear.  Silence belongs to man as the creature who possesses the word; noise, to the creature whom words possess, lashing him on, on, mechanically, without rest, without meaning.

The boy has taken up the book again, and turns to Isaiah.  He sees numbers, and small headings.  Each word on the page is like a living creature.  He can read the words, but he cannot yet reduce them to insignificance.  He cannot trap them and kill them, stuff them with his own knowledge and put them on a shelf.  He wants to watch the living creature.  He wants to follow it, as if you could tiptoe into its cave, and enter another world.

He is not being “stimulated.”  We who do not have the word have forgotten how petty and dreary a thing it is to be stimulated.  The stimulus is the prick or spur you dig into the side of an animal.  Imagine the horse, slow moving creature when he is content, with his large sad eyes.  If we are to make use of him, we must apply the spur.  The stimulus is the instrument of utility.  In a world where even human beings are no more than occasions for profit, the stimulus is everywhere.  It is as if everyone were wearing a hair shirt, not to mortify the flesh, but to nag it, to keep it from resting, to stimulate it.

Everything is a stinging nettle.  We drive down the street, and the signs nettle us; buy this, do that.  We enter a public place, and the music which is not music nettles us.  We look at the spines of books, and their large letters in unnatural colors nettle us.  Libraries are prickle-beds of visual noise.  Textbooks for children are so much noise; then the restlessness of the classroom; the political sloganeering; the inevitable exam; the “enlightened” urging of the parents; the sting, the lash of prestige, of seeking admittance to the “best” school, the “best” team, the “best” club; the noise of a clanking death-in-life.  Then to escape one noise, the children turn to another, the prick of the video game, the twitter, the drug, the sexual hook.

It is essentially a pornographic world, where everyone lies naked on a bed of nettles, and every new thing is dead before it is born.

Silence is so great a blessing to us because we cannot use it.  All things truly creative, which partake of the spirit of play, send their roots deep down into silence.  Watch the play of children, when they are given time to play, and an outdoors for play, without the direction – the stimuli – of goading and noisome parents.  People say that children at play are noisy.  That is not true.  They may whoop and holler and laugh, they may be heard from far off, but they aren’t making noise.  When an old man hears the cries of boys playing ball in a field around the corner, it is as if time had returned to its home in eternity, and the field of his youth had never gone away.

When Jesus said, “Suffer the little children to come unto me, for of such is the kingdom of heaven,” perhaps He meant to recommend more than humility and innocence.  For the great power of childhood is its direct address to the mystery of being.  The child is not yet swept up into the world of profit and loss.  He plays, and it is like contemplation.  He prays, and it is like play.  Even the dialogues of Plato, says Picard, partake of a kind of childhood, because when the play of conversation is over, the characters seem to let the silence settle among them again, as we can imagine Socrates and Phaedrus resting a little while longer under the plane tree on the road from Athens.

What do we now mean by “education,” if not efficiently directed stimuli, profitable noise?  We teach young people to encounter great works of art as if they were noise, prating about themselves and, Lord forgive us, about their creators, nagging us to prate about them in our turn.  And in all of this senile prattle what is lost, but the beautiful work itself, and the child, and the speaking silence between them?

We cannot educate young people, because we no longer understand what people are for.  We are the creatures who behold, who play, who give a tongue to silence.  That is one of the things meant by the verse, “Let us make man in our image.”