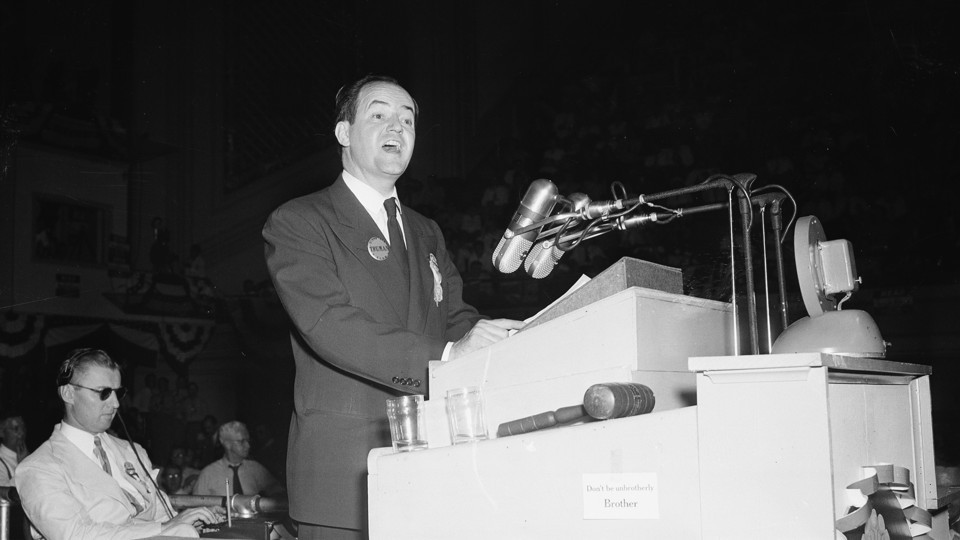 A long, thoughtful, well-researched, and theoretically serious piece of historical reflection has just appeared in The Atlantic, one which examines the fate of liberalism in post-WWII America–though not so much the ideas themselves as the role they had (and still have) in the American democratic system, meaning the degree to which they have guided political parties and the voters those parties either attract or repel (or both). The focus of the piece is the rise of Hubert Humphrey, and his drive to commit the national Democratic Party to becoming a party of civil rights and thus a vehicle to challenge the informal white supremacist norms which had dominated much of American life ever since the end of Reconstruction. The drive shaped internal party debates for 20 years, up through the Democratic party’s Götterdämmerung in 1968, and which the ensuing flight of white Americans to the suburbs (with all their environmentally and socially destructive consequences), the rise of–sometimes justified, more often, I think, simply paranoid–anti-government resentments, and perhaps even the destructive political career of Donald Trump in the decades which followed, have perhaps all been the unavoidable fallout. As the author James Traub puts it in the second paragraph:

The year 1948…is the origin story of the post-war Democratic Party. And the question this history imposes on us today is: Did the commitment of 1948 lead inevitably to the calamity of 1968 and beyond? That is, did the Democrats doom themselves to lose much of the white middle class simply by demanding equal rights for black people? If that’s the case, then racism is so deeply inscribed in the American soul, as much of the party’s left claims today, that a Democratic majority can only be founded on a coalition of the disadvantaged and the high-minded. If it’s not the case, then Democrats and liberals need to ask themselves where they went wrong.

This isn’t a new question for Front Porch Republic readers; once frequent contributor Jeff Taylor stayed on this beat for years. But through the prism of Hubert Humphrey, Traub brings many issues–the rural-urban divide in America, the ghost of “Jeffersonian individualism,” the limits of small-d democratic politics–into sharp focus. For those of us planning on attending the Front Porch Republic conference this September, “Fifty Years after 1968,” this article is a good way to whet our appetites. Go forth and read, everyone.