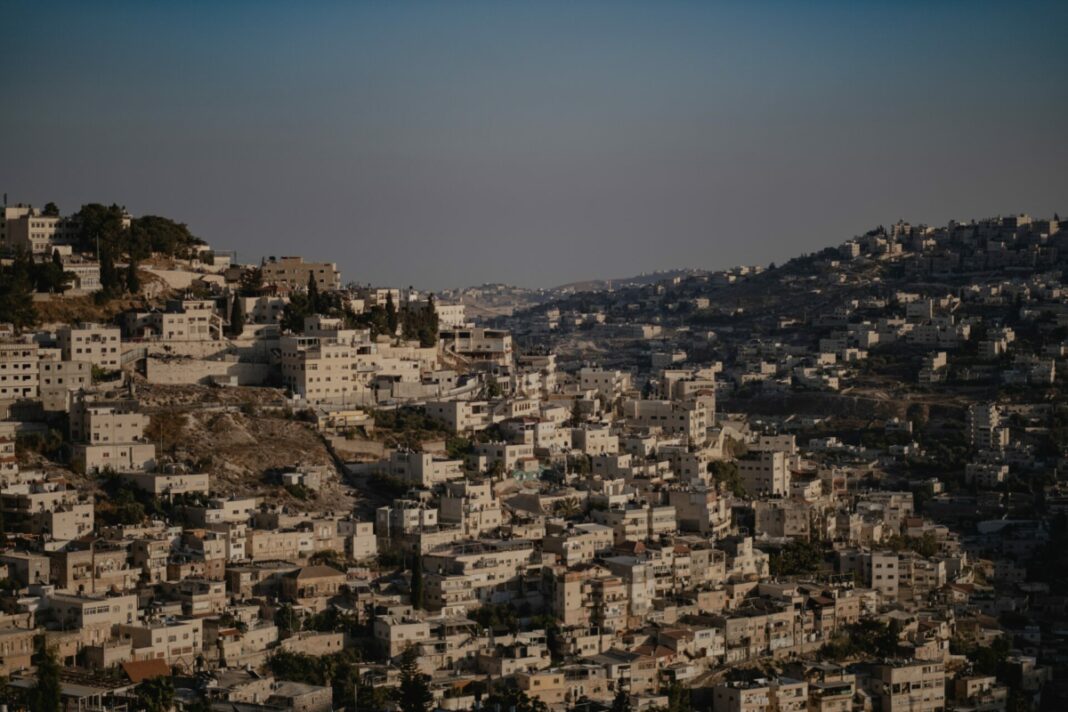 Jerusalem, Israel. It is September 1864, and a British captain and cartographer walks the streets of a city. Newly arrived, he has no authorization to be there except from his own government, which holds no sway locally. But this doesn’t stop him—at least, not at first. What he is after, though, is not in the modern city. Rather, his visions of discovery lie far beneath it, and in pursuit of these dreams, he digs exploratory shafts as far down as eighty feet. His dreams would soon come true: an arch he discovered, named after him as “Wilson’s Arch,” once provided a passage connecting the Western Wall region to the rest of Jerusalem. As Andrew Lawler explains in Under Jerusalem: The Buried History of the World’s Most Contested City, Wilson’s findings “confirmed that the platform renovated by Herod the Great starting in the first century BCE had been a monumental project, as ancient writers contended.”

Archaeologists today envision sites, including ancient cities, as a cake of many layers. The top layer is most recent, of course, while each subsequent layer that is carefully stripped away, ideally the fruit of season after season of digging with care, reveals an older story, with its prints of human lives lived so long ago, to which sometimes only the randomly preserved traces of pottery or loom weights or maybe a stray coin can now testify: yes, someone lived here once. Or, in the case of some findings, someone died here once. But in few cities does the cake contain quite so many layers, and such complicated ones, filled with stories of joy and even more sorrow, profound sin and even greater redemption, real and imagined, as it does in Jerusalem.

It is just before dawn in the mid-seventh century CE, and in a Jerusalem that has just recently been conquered by Caliph Umar, a young Muslim man walks the still dark streets with a purposeful stride. His task? To unlock that day—and each day thereafter—the doors of the Church of the Holy Sepulchre, welcoming the Christian worshipers and pilgrims from near and far. At the end of the day, he will also be the one to lock the doors again. His son, his son’s son, and so on will continue with this same task, first given to them by the Caliph himself.

Theirs for generations to come is the keeping of the keys to the church, even though they are Muslims—or, rather, this task is theirs precisely because they are Muslims, and thus the different Christians who hold the site sacred can trust them to remain neutral and not to privilege the Orthodox over the Catholic or (eventually) the Protestants of one stripe or another. So they will continue, each son succeeding a father or an uncle, up until the present day. And in the meanwhile, the street level will rise seemingly imperceptibly over these 1,300 years that intervene, even as scions of this same family continue their twice-daily morning and evening walks along the same streets.

It is the mid-1920s, and an old woman, frail yet radiant with her century-old beauty, walks on unsteady feet to the Western Wall. Bringing with her a small chair, she sets it up in front of the Wall and begins her prayers. A soldier of the British Mandate, standing on guard by the Wall, rebukes her harshly for bringing a chair there and starts to confiscate it. Unfazed, she looks calmly into his eyes, holding his gaze until, embarrassed, he walks away. Completing her prayers, she continues on her day of serving others, seeing and affirming in each man, woman, and child around her the face of God.

Her story of life as a saint while still living is a work of fiction, the fruit of the imagination of the Israeli writer S-Y Agnon. But reading the story of this woman, Tehilah, one wishes ardently that she had been real. It seems that Agnon did too, as his almost prayerful description of her otherworldly goodness tries to speak her into existence at the beginning of the story: zkena ahat hai’ta be-Yerushalaim, “an old woman once lived in Jerusalem…”

It is 1947, and a little boy with an overactive imagination roams the streets of the city by day, and in his dreams and imagination at night. Sometimes he even walks to S-Y Agnon’s neighborhood of Jerusalem, Talpiyot, where his own uncle is Agnon’s neighbor right across the street. And the boy will dream of someday being a great writer, like his uncle or even Agnon.

Just a year later, Israel’s establishment as an independent country will rock this boy’s world, driving him, his family, and a number of friends and neighbors into a subterranean basement existence for months, as they try to shelter for safety during the brutal siege of Jerusalem that will rage all around, killing one in every hundred of the city’s inhabitants through bombing or famine. But this boy’s greatest loss, the one that will haunt him for the rest of his life, will come after the war, when his mother will take her own life, leaving him forever asking questions to which he could never find answers. In grief, he will abandon the city life for the kibbutz, an agricultural commune. He will shed even his previous name as though sloughing off old skin. But under his new name, Amos Oz will nevertheless come back to his memories of the city that was his first and greatest love affair over half a century later in his memoir, A Tale of Love and Darkness.

A teenage girl, moody and gangly, uncomfortable with her limbs that seem to have elongated too quickly over the previous year, walks reluctantly to the Wall. She does not live in Jerusalem but is visiting the city for the day with her family. They are walking around the old city along with her mother’s old college friend and that friend’s teenage daughter, who live in Jerusalem. Tourists and devout believers mix freely but not comfortably at the Wall’s plaza. Gone are the days of the British soldiers, whose harassment of worshipers she had read about recently in Agnon’s Tehilah. It is busy but not excessively crowded, so everyone is able to walk up to the Wall, where some Orthodox men, so readily recognizable by their garb, are praying fervently.

The moody-looking girl feels uncomfortable to be there and wonders why no one else in her group feels this sense of utter discombobulation as well. Aren’t they too unbelievers? How does one walk right up to this place that some believe to be the holiest on earth? But intrigued and worried about receiving questions or rebuke if she does not do as everyone else, she touches the stones of the wall ever so quickly, withdrawing her hand before—well, what? She is not sure why she is so nervous.

But it just seems so wrong to treat a place so holy to others with the apathy that she thinks she feels. At the age of fifteen, she has no idea that in another fifteen years, God will bring her to himself in a spectacular show of power, overturning everything in her life.

I know her innermost thoughts so well because this memory is mine. As we look back on our younger selves, everything seems in hindsight to make so much more sense in, but also so much less. With the benefit of decades of hindsight, ordinary days might seem, colored by nostalgia mixed with subsequent experiences, extraordinary.

To walk a place is to open the door to the possibility that you will grow to love it. With time, you could get to know it in an intimate way. Streets or roads or wild forest paths that we walk for the first time can be the object of wonder, even if sometimes also mingled with fear and mistrust. But once we have frequented them over and over again with our feet, they become close friends, whose every sign and feature are comfortably familiar, to the point of feeling possession—this street or trail is mine, even if I do not actually own it in any legal sense. Isn’t this how explorers and adventurers have felt since time immemorial?

Streets that are special to us become seared in our imagination and heart in a strange way, in which decades later we can still draw in a breath and smell that familiar tree in bloom. Except the tree is long gone, and the street, Google satellite images show, has been repaved, and everything looks completely different. The cake has added another layer in our absence, but then it would have surely done the same even in our presence. Would that have hurt less?

A mailman walks briskly towards the Wall, rushing in the afternoon heat to complete his deliveries in advance of the impending Day of Atonement, scheduled to begin at sunset in just a few short hours. With practiced motions, he places in the wall cracks the letters in his bag that are addressed to God, with no further details of delivery address necessary. This unique address, after all, “hasn’t changed in thousands of years.”