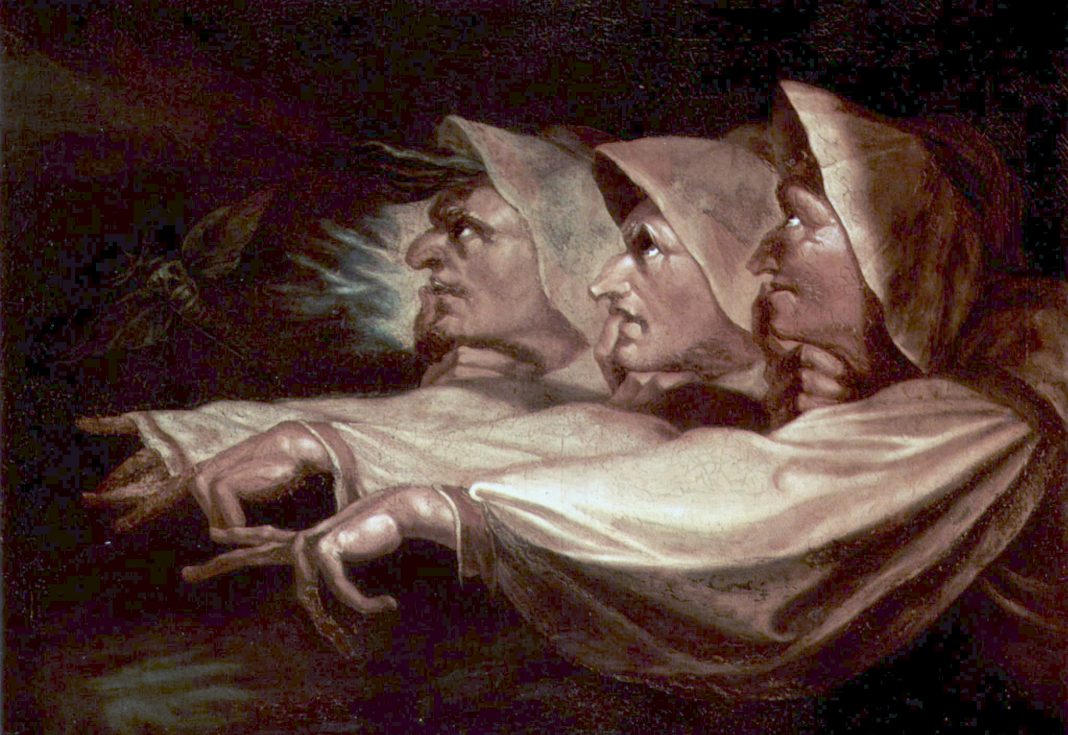 For some time now the entertainment industry has been in the habit of inverting symbols traditionally associated with evil. Even a casual glance at pop culture reveals new archetypes – sensitive selfless vampires, misunderstood ogres, noble dragons hunted to near-extinction by Dead White Male knights. The lesson seems to be that we should not demonize demons but rather those who oppose them; this new attitude makes a perverse kind of sense, given society’s increasing dependence upon increasingly monstrous arts. “Have we forgotten,” demands Weaver, “our encounter with the witches on the heath?”

At the risk of offending Wiccans with crude and intolerant Shakespearean prejudices, let’s recall said encounter, as envisioned in Act IV of Macbeth.

Fillet of a fenny snake,
In the cauldron boil and bake;
Eye of newt and toe of frog,
Wool of bat and tongue of dog,
Adder’s fork and blind-worm’s sting,
Lizard’s leg and owlet’s wing,
For a charm of powerful trouble,
Like a hell-broth boil and bubble.

Bits of a dismembered Creation fuel the cauldron, which radiates infernal energies that may then be channeled for the witches’ purposes. So the cauldron is an appropriate representation of the Baconian dream, because for the Baconian the goal of science is not so much to comprehend nature as “to dissect her into parts,” thereby “extend[ing] the power and dominion of the human race itself over the universe.” To paraphrase Arthur C. Clarke, any sufficiently unnatural technology is indistinguishable from witchcraft; as Clarke’s countryman C.S. Lewis observes, said similarity is not entirely coincidental.

I have described as a ‘magician’s bargain’ that process whereby man surrenders object after object, and finally himself, to Nature in return for power. And I meant what I said.  The fact that the scientist has succeeded where the magician failed has put such a wide contrast between them in popular thought that the real story of the birth of Science is misunderstood. You will even find people who write about the sixteenth century as if Magic were a medieval survival and Science the new thing that came in to sweep it away.  Those who have studied the period know better.

There is something which unites magic and applied science while separating both from the wisdom of earlier ages. For the wise men of old the cardinal problem had been how to conform the soul to reality, and the solution had been knowledge, self-discipline, and virtue. For magic and applied science alike the problem is how to subdue reality to the wishes of men: the solution is a technique; and both, in the practice of this technique, are ready to do things hitherto regarded as disgusting and impious—such as digging up and mutilating the dead.

This is not to denounce technological development as such — technologies and techniques are necessary conditions for human existence — but to highlight how certain approaches to technology may exemplify contempt for the unity of the universe. Lady Macbeth neatly exemplifies such contempt for harmony and propriety while admonishing her mate to carry their treacherous plans to completion.

I have given suck
And know how tender ’tis to love the babe that milks me:
I would, while it was smiling in my face,
Have pluck’d my nipple from his boneless gums
And dash’d the brains out, had I so sworn as you
Have done to this.

Perhaps Shakespeare saw this depiction of a woman ready to murder her own helpless child as the best way to highlight the fact that evil unravels norms. As the lady later spirals down into mad despair, her physician accurately diagnoses her predicament, and ours: “Unnatural deeds / Do breed unnatural troubles”.

As for Macbeth himself, once the Scottish throne is acquired he seeks to secure it via more witchcraft, making explicit his own willingness to trample the given order of things. That knowledge of the future represents a violation of Time is irrelevant to him, for should expediency call for it he would fission the very cosmos itself into chaos. In short, he seeks information in a spirit that necessarily excludes wisdom.

I conjure you, by that which you profess,
Howe’er you come to know it, answer me:
Though you untie the winds and let them fight
Against the churches; though the yesty waves
Confound and swallow navigation up;
Though bladed corn be lodged and trees blown down;
Though castles topple on their warders’ heads;
Though palaces and pyramids do slope
Their heads to their foundations; though the treasure
Of nature’s germens tumble all together,
Even till destruction sicken; answer me
To what I ask you.

It is difficult to say whether this appalling attitude is a consequence of King Duncan’s murder, or the crime’s latent cause. Either way, Macbeth’s speech is inseparable from Macbeth’s willingness to transgress three principles of the natural law in a single stroke, by betraying and slaying a man who is simultaneously his guest, his lord, and his kinsman. “Though the treasure of nature’s germens tumble all together, / Even till destruction sicken” – whose imagination is so enfeebled that he cannot see in these lines a dismal foreshadowing of modern Western history?

The technocracy / witchcraft parallel may even be extended to modern experts.  Like Macbeth’s sinister counselors, such experts confer factoids and misleading predictions – the worse-than-useless illusion of knowledge. “Security,” the infernal goddess Hecate reminds the Weird Sisters, “is mortals’ chiefest enemy.” Whom the devils would destroy they first make smug, and so the hags’ apparitions make pleasing promises. “[L]augh to scorn/The power of man, for none of woman born/Shall harm Macbeth.” And: “Macbeth shall never vanquish’d be until/Great Birnam wood to high Dunsinane hill/Shall come against him.” In much the same way do the specialists of agribusiness, national security, finance, and education tout the infallibility of their often misleading advice, which contains at least a speck or two of ironic truth. (Growth hormones and antibiotics really do boost meat production; the defeat of Sadaam Hussein’s army really was a cakewalk; credit cards really do allow the consumer to buy things he can’t afford; egalitarian education really has ensured that everybody can get a college degree.)

With poetic justice doom arrives for Macbeth in Act V. A God-fearing and divinely-gifted ruler, England’s Edward the Confessor is in every way Macbeth’s opposite, and so it is appropriate that Edward’s forces aid in restoring justice. Offended nature likewise lends its powers to Macbeth’s enemies when they hew down the boughs of Birnham wood for camouflage – thereby voiding one of the witches’ supernatural guarantees of safety. And if, as seems likely, MacDuff’s mother gave her life in labor, then her son is maternity’s way of neutralizing Lady Macbeth’s sick rhetoric — along with the remaining protective spell. “Despair thy charm,” the avenging nemesis tells his prey, after hearing of the promise that “none of woman born” will harm the tyrant. With brevity Macduff blows Macbeth’s last hopes to oblivion:

And let the angel whom thou still hast served
Tell thee,
Macduff was from his mother’s womb
Untimely ripp’d.

As many readers will recall, the play concludes shortly thereafter with Macduff presenting Macbeth’s head to Malcolm, rightful King of Scotland. I’m told that some productions show, as a kind of epilogue, the three witches silently slipping back on stage to make off with the trophy for their own purposes.  This is an intriguing touch, for ultimately Macbeth is doomed neither by enemies nor by witches but by himself.  Witchcraft can tempt or deceive a man, but it cannot force him to do evil, or to “wish the estate o’ th’ world were now undone.” By choosing to regard all Creation as mere fuel for his desires, Macbeth wills the chain of events which will deliver his own head into the insatiable maw of the waiting cauldron.