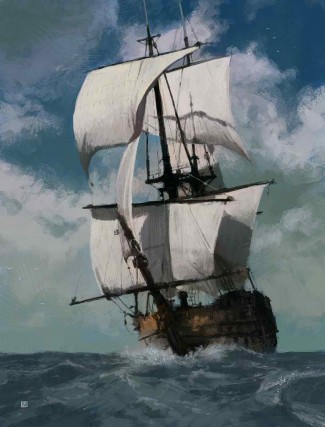 In Letters from Lake Como Romano Guardini asks us to consider a sailing vessel, which, “though it is of considerable weight, the masses of wood and linen, along with the force of the wind, combine so perfectly that it has become light.”

“We have here an ancient legacy of form,” he says. “Do you not see what a remarkable fact of culture is present when human beings become masters of wind and wave by fashioning wood and fitting it together and spanning linen sails?”

But “mastery” as Guardini uses it is not mastery as we usually think of it. He is not interested in the modern project of easing man’s estate and achieving what according to Bacon was truly lost in Eden: complete dominion over nature. Guardini neither flaunts modern credentials nor posits a state of nature such as Locke or Hobbes or Rousseau might recognize: “In nature ‘untouched,’ in the order in which animals live, we have no place.”

Our dwelling place, he says, is the state not of nature but of culture. “The human world is putting natural things and relations in a different sphere, that of what is thought, willed, posited, and created, and always in some way remote from nature—the sphere of the cultural.”

For Guardini, “to be human is to have mind and spirit at work,” and so for him the sailing vessel is infused with mind and spirit. Swimming or frolicking in the breakers may give us a certain “intoxication of kinship with nature,” but we were not made like fish to live in water. We live by artistry, and artistry always implies a remove from “nature ‘untouched'”: “in the finished sailing vessel, a certain distance from nature has already occurred. We have both withdrawn from nature and mastered it. Our relation to it is now cooler and more alien. Only in this way can any work of culture, of mind and spirit, be done.”

But this is no matter for lament.

“Yet do you not see how natural the work remains? The lines and proportions of the ship are still in profound harmony with the pressure of the wind and waves and the vital human measure. Those who control this ship are still very closely related to the wind and waves. They are breast to breast with their force. Eye and hand and whole body brace against them. We have here real culture—elevation above nature, yet decisive nearness to it. We are still in a vital way body, but we are shot through with mind and spirit. We master nature by the power of mind and spirit, but we ourselves remain natural.”

By contrast, says Guardini, the steam ship obliterates the decisive nearness. It is naught but elevation above nature. No one on such a ship is still in a vital way body. “A colossus of this type presses on through the sea regardless of wind and waves. . . . People on board eat and drink and sleep and dance. They live as if in houses and on city streets. Mark you, something decisive has been lost here.”

Guardini offers other examples by way of illustration, among them the mastery of fire in the hearth and the cultivation of the earth by the horse-drawn plow. In both cases there is real culture: mastery of and yet proximity to nature that neither the central furnace nor the tractor manages to retain.

There is no attempt in Letters from Lake Como to fix a line, only to say that with each change, with each “step-by-step development, improvement, and increase in size . . . a fluid line has been crossed that we cannot fix precisely but can only detect when we have long since passed over it—a line on the far side of which living closeness to nature has been lost.”

Let us not miss the point: Guardini is suggesting that mastery of nature need not mean we cannot also have full integration into it.

But at a certain point, somewhere beyond that fluid line, it means exactly that: no integration, only mastery—mastery over rather than mastery of, which is to say the Baconian dream: ocean liners, climate control, and the thirty-two-row air conditioned combine with surround sound and GPS.

The sailing vessel, which Guardini says preserves “an ancient legacy of form” shot through with mind and spirit, “the lines and proportions [of which] are still in profound harmony with the pressure of the wind and waves and the vital human measure”—this vessel, this bark, this thing that has proven to be so richly emblematic (think of Donne’s “A Hymn to Christ, At the Author’s Last Going Into Germany”) merits the attention Guardini gives it as both emblem and artifact. It reminds us that we do in fact have a choice in how much mastery we achieve—and in how much nearness we are willing to surrender. The evidence around us suggests that for too many of us the mastery should be unlimited and the nearness entirely surrendered.

Guardini lived long enough to witness the brute unintelligence of the bulldozer, though not the Eucalyptus Muncher of which I wrote in the early days of FPR. But the truth is that almost all of us—I include myself—are the beneficiaries or victims (take your pick) of such marvels as the table saw, the automatic dishwasher, and the golf cart (that chief of all abominations).

What we are not the beneficiaries of, near as I can tell, is a sustained intelligent discussion of form—form and its bearing on our relation to “nature ‘untouched,'” which the architects of modernity, spurning their Aristotle, assumed to be our default condition.

Here is Wendell Berry on art and science and the problem of form: “Without propriety of scale, and the acceptance of limits which that implies, there can be no form—and here we reunite science and art. We live and prosper by form, which is the power of creatures and artifacts to be made whole within their proper limits. Without formal restraints, power necessarily becomes inordinate and destructive. That is why David Jones wrote in the midst of World War II that ‘man as artist hungers and thirsts after form.’ Inordinate size has of itself the power to exclude much knowledge.”

The thing about artistry—true artistry—is that it is characterized by the limits of form: a sonnet is limited by its rhyme scheme and syllabic count, a piece of music by (among other things) its time and key signatures, a portrait by its frame, a statue by the piece of marble it steps out of, a farm by its conditions and the skill of its husbandman. Not that the disregard for such limits hasn’t manifested itself in poetry, music, sculpture, painting, and farming—or in other arts. In all our arts we can find versions of the steamship.

Guardini’s sailing vessel should help us begin to think again about what Berry calls “propriety of scale.” But we are going to have to know the meanings of such words as “propriety” and “scale.” We would do well to know what “property” and “form” and “art” mean as well. But that will mean wading into the currents of “restraint” and “truth” and “beauty” and “goodness.” And where will that end?

Maybe in an artistry, shot through with mind and spirit, that achieves mastery of while preserving nearness to.