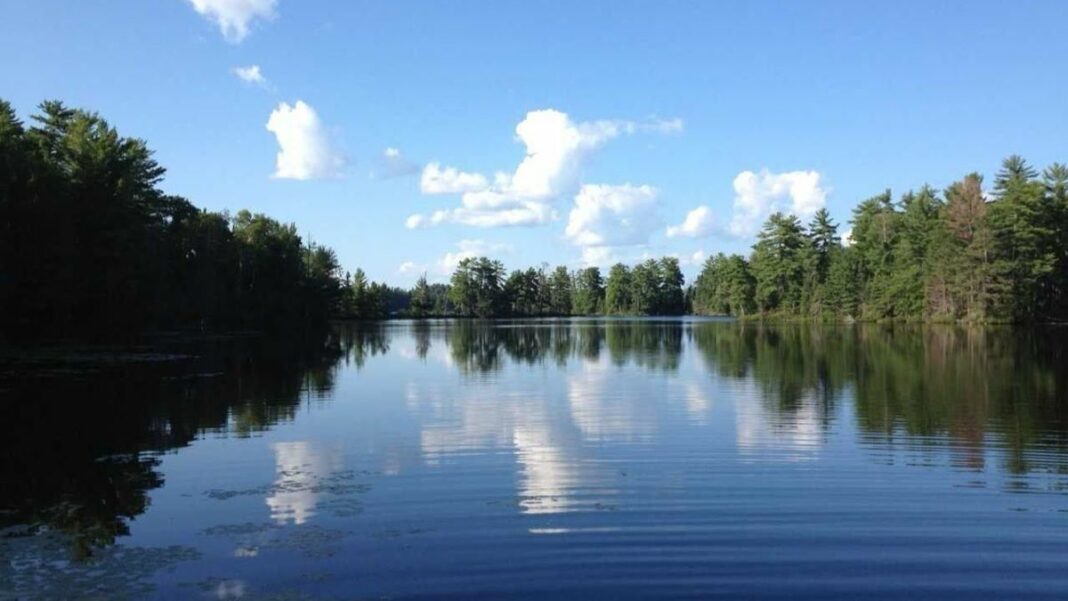 Twin Cities, MN. Some of my most prized childhood memories involve fishing on a dock during 4-H Achievement Days on Devils Lake just outside of Minnewaukan, North Dakota. Between showing rabbits and sheep and eating hamburgers at the food stand, my best buddy and I would steal off with rods and jigs and leeches in tow to fish North Dakota’s best lake. It was glorious. I could think of little better than being off and away from adults, feet in water, sun high and warm in the sky, and a stringer full of walleye. One year we did so well that all the boaters coming into dock were left scratching their heads. How did these shore-bound lads out-fish us?

Like all 10-year-olds, we decided one year to build a raft. We found some driftwood on the shoreline and lashed it together with seaweed or rotting rope, I’m not sure which. Then we were off! Oh glory of glories! We might never return. Reared on Tom Sawyer movies and tales of frontier-folk, I felt destined to live a life of daring adventure in the wild. Perhaps this would be the beginning; perhaps we would find a long-forgotten island and, like Robinson Crusoe, build a life out here. Alas, it was not meant to be. A couple-hundred yards out our raft came apart. I was a serviceable swimmer, but wondered at one point whether I was a goner, clinging to a lone log and praying that my toes would soon touch mud.

Dreams–and rafts made by 10-year-olds–fall apart. I did not become the next Davey Crockett. Alas, 20 years after my fateful raft ride, I found myself on the 34th floor of a skyscraper in downtown Minneapolis doing legal doc review. A freshly-minted lawyer working for a large products-liability law firm, I had the great pleasure of spending dozens of hours a week poring through engineer’s emails looking for, I guess, a smoking gun. A smoking gun–perhaps the closest I would get to the wild west. Sigh.

I knew that 34-floors beneath me, and just a couple blocks away, flowed Mark Twain’s own mighty Mississippi. Alas, my office faced south, with a view not of God’s river, but of the man-made modern equivalent: Interstate 94. All that concrete and asphalt made me wonder: is this why I just spent the last 20+ years of my life in school?

I lasted one year. When I moved across the river to Saint Paul to take a job that was a better fit, I had one day off between roles. My wife, knowing my soul better than I, hooked me up with a kayak and a free day away from my familial obligations. I took the kayak and my rod and lures and some sandwiches and my tobacco and pipe to the nearby St. Croix river, which borders Minnesota and Wisconsin. It was supposed to be glorious. An opportunity to ignite again my vision of life alone on a river; roughing it; living the good life.

I was not only alone, but lonely. Now married with three sons, I wanted to share my river adventure with them. The sandwiches were ok, but I didn’t catch any fish, and I frankly felt a little foolish while I smoked a pipe and paddled around. I didn’t learn the lesson perfectly, but I think I began to understand that my life’s adventure had taken on a different shape. No less thrilling or risky. The adventure of being a husband and father.

I have five boys now. The oldest is 10, the same age as Fischer Branson (“Fish”) and Dale Breadwin (“Bread”), the two heroes of Andrew Graff’s recently-published first novel, A Raft of Stars. Upon reading this glorious novel, the preceding thoughts came to mind: about boyhood dreams and adventure and friendship and woods and water and the Upper Midwest and fatherhood and danger and faith and what it means to live the good life. The book is probably labeled an adventure novel, or coming-of-age tale, and surely it is those things. But perhaps more fittingly it could be called a philosophical novel. Not the kind that brings to mind pale and slender Frenchmen wearing berets, sipping cappuccinos, and smoking cigarettes in a café while reading Sartre, but the kind where the men and women wear cowhide and boots, eat chew, carry Barlow knives, and read Louis Lamour to their kids as bedtime stories. The question is: which of these images conforms better to notions of the good life?

And the question of how to live, or what makes for the good life, is at the center of the story. Graff takes seriously–without any hint of irony–questions of fatherhood and motherhood, family, faith, evil, prayer, friendship, Providence, and loss; namely, the stuff of life. The stuff that people who live lives actually care about.

The basic thrust of the novel is relatively simple. Fish and Bread are best buds, spending their days rescuing baby turtles, shooting roaming coyotes, and exploring the Wisconsin Northwoods. But their youthful innocence masks deep pain; both suffer from the absence of fathers. Fish, because his father was killed fighting in the Middle East, and Bread, because his father is an abusive drunk. One night Bread goes home late, knowing his father will again beat him. Fish waits outside Bread’s house, about to head back to his Grandpa’s, when suddenly, stirred by instinct or the Holy Spirit, he enters Bread’s house and sees Bread about to be pummeled by his father. Fish grabs a pistol lying nearby and fires one time at Bread’s father, who drops to the ground. Believing Fish has just murdered Bread’s father, both boys flee into the Mishicot Forest, where they build a raft and hope to make their getaway.

But the boys are pursued. Both by those who wish them well (local Sheriff Cal, Fish’s mom Miranda, his grandpa Teddy Branson, and local barista Tiffany) and one who does not (spoiler: Bread’s dad is not dead). The story is at once a page turner and also a deep meditation on loss and love and goodness and grace and mercy and the power of prayer.

As I said, my eldest boy is himself 10 years old. Sometimes I ache at the thought of the world he is inheriting. Is there any wonder left? Any opportunity to get lost in the wilderness, to build a raft and float away to the great unknown? Or has the world become thoroughly disenchanted, offering boys nothing more than an endless loop of pornography, YouTube, and videogames? Forgive me for sounding like an old grump. Perhaps this is how every generation feels about what they are passing on; perhaps every generation experiences loss and the sense that they have failed to preserve the good life. Maybe our own sins and negligence are too obvious to us that we fail to see the full inheritance that has been and is being bestowed daily.

But then I read a book like Raft of Stars, and I am again filled with wonder. Not just at nature–at rivers, forests, and fields–but at my children themselves. At my 10-year-old son, certainly not a mirror image of myself (thanks be to God for that), charged with the grandeur of God.

That folks such as Andrew Graff write novels like this is, for me, a sign of great hope. And as I watch my eldest son vigorously chopping cedar logs with a hatchet in the backyard, or digging four-foot-deep mud pits, or corralling our herd of chickens that have escaped into the neighbor’s yard, I have a little more confidence to pray along with Julian of Norwich, all shall be well, all shall be well, and all manner of things shall be well. Just like (spoiler alert) all is now well for Fish and Bread.