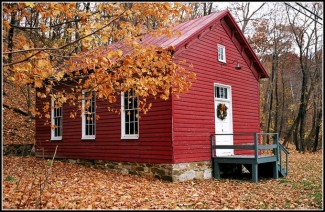 “Imagine,” said my friend, “how long it takes the bus to go from Little Anse,” a village at the extreme end of the island where my family and I spend our summers, “all the way out to the Academy, stopping every five hundred feet.”

“It must take an hour at least.”

The people of Little Anse and the two neighboring villages are fierce defenders of their local church, St. Joseph’s, where Masses have been said for many decades in French.  They are determined that, if one or two of the four churches on the island must close, it won’t be theirs.  But they no longer have a school to defend with that same determination.  The Academy, as the high school is called, is, like most such institutions in the United States and Canada, in the middle of nowhere, inaccessible except by bus, and set far from the road so as to discourage casual visitors.

Why do people invariably enjoy visiting old one-room schoolhouses?  They are human places, on a human scale, for the education of little human beings.  It isn’t just that one knows, without having to think about it consciously, that the planks and joists where pegged together by the hands of the same people whose children would go to school there.  It’s that the whole idea of the school is founded upon their natural desires and intentions.  There is the boiler, to keep the class warm in winter.  There is the woodshed, for the boiler.  The men would stock that shed, and boys would haul the logs in when needed.  There is the schoolyard, cleared for play.  There are the windows, for natural light and for fresh air when the spring comes.  There is the American flag, and a portrait of Washington, Father of the Country.  There are the books, tailored for children, certainly, but also compact, without wasted space – for books were expensive.  The readers are filled with folk tales and poems and historical fiction and, for the older children, selections from Cicero, Shakespeare, Milton, and Pope.

The school looks in part like a home, or a small town hall, or a chapel.  Appropriately so, since it is a public extension of the home, in harmony with the virtues encouraged by the church.  As at home, as in church, children intermingle, the older ones seeing to the younger ones.  There is no unnatural separation by year of birth.  The teacher is hired by the people, for their purposes; he or she is not a member of a cabal intent upon subverting the purposes of their employers.  The school belongs to the people who live there.  It is their free and liberty-making creation.

Such schools, or schools somewhat larger but similar, used to be everywhere.  One of my earliest memories is of a wooden schoolhouse painted blue, not five hundred feet from our back door – burning to the ground.  My mother went there when she was a little girl.  When she was older, she walked to the small high school “downtown,” a little less than a half a mile away.  That structure, next to the rectory and the Catholic church and across the street from the parish hall, the Knights of Columbus, a candy store and a barber shop, met its fate around 1970, when three towns consolidated into one district and built a new high school, sprawling, expensive, ugly, and inaccessible.  The last time the building was used was as a home base for the town’s centennial celebration in 1976.  It remained boarded up for years, till it was condemned and torn down.  Now a little park and garden commemorate where the high school – where my mother learned Latin, in a graduating class of about thirty –used to be.

For a long time, the poison of compulsion was kept in check by poverty.  People simply couldn’t afford to destroy the natural institution to benefit the unnatural.  There was no way to whisk hundreds of children miles away to the impersonal Academy, built by contractors and staffed by people largely unknown and with purposes of their own, for whom parents are either compliant clients, no-shows, or pests.  So, even though it was made compulsory for children to attend school, the compulsion had not yet begun to characterize the kind of school they were to attend.  But that state of affairs could not last.

It did not survive the revolution in transportation that replaced legs with wheels.  But what really killed it, as it seems to me, was the new “science” of education peddled at the teachers’ colleges.  It hardly matters what that “science” would decree.  It might have, in a Dewey-less world, decreed a classical education for everyone; that would have been superior to the flattening pseudo-democratic education it did decree, but it still would have carried the bacilli of compulsion.  The point is that teachers, usually of modest intellectual attainments, came to feel themselves armed with “science,” as against the “prejudices” of their employers the parents, whom it was their sacred duty to oppose, if need be.  Hence came the wave upon wave of educational “innovation,” all impossible without the precondition of compulsion.  No smart-aleck teacher, alone in a small schoolhouse, would have dared to introduce anything so staggeringly stupid as the basal reader or the New Math (that is, Set Theory for little children) or the replacement of history with current events or the wholesale ditching of geography or the introduction of modish obscenity in English classes or the celebration of sodomy in health class (!), without being fired – after having had to face the withering scorn of the employers, the parents, some of whom, for keenness of intellect, could no doubt have used that teacher to mop the floor.

I’m not saying merely that the nature of the modern school makes the imposition of such madness possible.  I’m saying that – unless there is a concerted effort to resist – it makes that imposition inevitable.  For the whole structure of the school declares the insignificance of the person and the all-importance of the system; children are not taught, but managed.

I began this essay by considering the absurd distance the children of a place called Little Anse had to ride to go to school, and the three hours it rips out of their lives, every day for more than nine months of the year, for thirteen years.  It is a cruel thing to do to children.  But it is appropriate, because it’s a cruel place they are riding to.  No one would impose such a burden on them, and no one would build such a place for them to go to, without either the power to compel, or the habit of being compelled.  A free people would find both the ride and the destination repugnant.  More on the destination in my next essay.