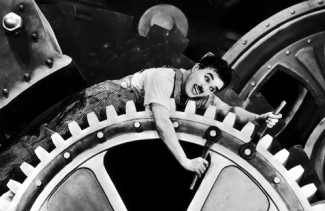 Charlie Chaplin is working on an assembly line.  He tightens bolts with a pair of wrenches.  He does this without stop, over and over, for hours on end.  The repetitive motion drives him temporarily mad – the machine takes over the man.  He leaves the factory with the wrenches still in his hands, trying to “tighten” everything in sight that looks like a pair of bolts, including the buttons on the breasts of a woman’s dress.  That invasion of the machine into him is like what happens when, by accident, he is sucked into the works of the machine, and we see the little mustachioed fellow cranked this way and that as he is caught between the thing’s gigantic gears and cables.

Perhaps the people who run our schools should check out a copy of Modern Times, and consider the nifty Billows Feeding Machine, to which Charlie is strapped for automatic lunch, with mechanical arms to give him his soup and wipe his mouth.  The genius of the Billows Feeding Machine is efficiency.  Why should the human cog take thirty minutes for lunch when he can take ten?  That’s twenty minutes saved for work, and time is money.  Students who have an hour for their lunch hour rather than a few rushed minutes for their lunch hour may get into trouble, it’s often said, at which one throws his hands up in despair and cries, “Better human trouble than inhuman order!”  About that trouble and its causes I’ll have more to say in a future essay.

But back to the Billows Teaching Machine – the school.  We are so accustomed to its ways that we can scarcely imagine any alternative.  Children must be segregated by age.  Why?  Is that natural?  Do all children learn the same things at the same time and the same rate?  Uniformity is the product of a machine, not of a living organism, much less the living spiritual being called man.  Children must be hustled from room to room, or from subject to subject, at the ringing of a bell.  Why?  Do all subjects that merit study fit neatly into forty-two minute cubbyholes?  What if a child’s interest in the subject is just then beginning to kindle?  Doesn’t that matter?  What if it just takes longer to read a chapter of Treasure Island?  Should the child have to curtail the reading in mid-event – as if freezing the characters in place?

I know, I know, I am a college professor, I too meet my students at a certain time, for an hour, and then time is up (though we don’t have bells, and though, late in the afternoon, I’ll often ask my students to stick around a little longer).  We take it all for granted.  Why?  And the always somewhat arbitrary division of the day into subjects – why?

Homeschoolers know what I am getting at here.  When Socrates and Phaedrus were sitting under the plane tree on the country road from Athens, no alarm rang on the old man’s watch to tell him it was time to move from moral philosophy to metaphysics.  “Sorry, Phaedrus, but your time is up” – no one can imagine Socrates saying such a thing.  When Jesus sat upon the hillside and taught the crowds, he and they were so taken up into meditation upon the kingdom of God that they lost all sense of time, and soon the sun was setting and – well, unless you are a reader of The New York Times or a graduate of Harvard you know the rest of the story.  When, in Paradise Lost, Adam and Eve are sitting in the cool of the evening, recalling when they first met and praising the goodness of God, Eve expresses a joy that teachers and students should know, but rarely have the chance to know:

With thee conversing I forget all time,
All seasons and their change, all please alike.

That was, of course, when people measured their works according to the place of the sun, and the state of the weather; the whole world was their time.  That whole world had not yet been concentrated into the electric clicks of a machine on a wall.

The chief lesson that the bell teaches is that all things must serve a utilitarian purpose.  I recall reading in The Princeton Alumni Weekly, an insufferable publication of my alma mater, about how a woman managed time with her small boy.  He was allowed to approach the Presence between three and three-thirty, but then he had to leave, because Mummy had important work to do, evidently far more important than was the small boy.  But also more important than Mummy herself.  The bell says, “Nothing is of ultimate concern, because all things end when I determine.”  There are only two reasons why one would study a thing that is not of ultimate concern, or that does not bring that delight that carries us out of ourselves, as experiences of love and beauty do.  One is that it is useful, a means to a farther end.  The other is that we have no choice.  We are compelled to do it.  And since the experience of love or of beauty is by its nature impossible to compel, any justification for the compulsion must rest on utilitarian grounds.  But that reduces education to a tool, and a tool which is often of dubious quality.

That is right and just, since the children themselves are tools of dubious quality.  They are called our greatest resource, like a deposit of tin.  They are treated as advance troops in the remaking of the human material known as their parents.  They are educated, not as persons made in the image and likeness of the living God, but as pawns in a vast sociopolitical game; they too are not valued in themselves and for themselves, but for what they will accomplish.  They will be rewarded according to how well they adapt themselves to the Teaching Machine, whose judgments are at once lax (for the Machine does not actually teach a great lot) and severe (for the judgments enter the Book of Life, with implications for college and employment thereafter, worldliness without end).

How does the Machine mechanize?  More on this to come.