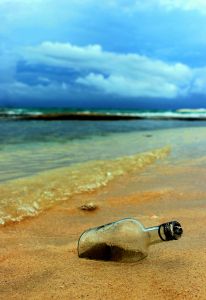 Every now and then we hear of a lucky homeowner who takes down a wall to make renovations on his house, and finds inside it a cache of wonders; dozens of original posters advertising movies from seventy and eighty years ago; a box of handwritten letters; something that brings the past back to us in a powerful and surprising way.

I have been having that experience lately, rummaging about antique stores with my wife.  She turns to the common daily things that make a home lovely.  We both turn to old magazines – nothing printed after 1960.  Lately I’ve been finding bound editions of The Century, more than a century old, and Scribner’s, and something I’d never heard of, World’s Work.  I’ve also found books, not those that the classical professors would be studying in college, but good solid books for the common man.  These are like time-capsules, or like messages in a bottle, tossed on the sea by someone on a shore so far away it seems to have floated to my hands from a star in Orion or Ursa Major.  One such message came to me the other day, to testify to the spiritual abyss dividing us from our forebears who walked the earth not so long ago, and to what they thought an education was supposed to be.

I’m holding a handsome hard-cover book with the simple title, Bliss Carman’s Poems.  William Bliss Carman (1861-1929) was a Canadian poet who spent most of his adult life in New England, and who achieved wide recognition for his lyrical songs of nature, of love, and – though he was an odd theological bird – religious devotion.  No one remembers him now.  He deserves a better fate, but when this collection was compiled by Dodd, Mead, and Company in 1931, two years after his death, plenty of people remembered him and cherished his work.  There’s no annotation in the book; it isn’t an academic edition.  It’s meant for the people, as is clear from a remarkable tribute which the publisher has pasted on the inside front cover:

To students of poetry, Bliss Carman is best known for his development of the unrhymed sonnet.  To the public he is hailed as one of the foremost American nature poets, the troubadour, par excellence, of vagabondia and the open road.  The quiet hills and rocky brooks, the leafy sanctuaries and secluded valleys of New England and of Eastern Canada comprise the great portion of his poetry.  And of this country he sings to all the world.

In this one volume is collected almost all of the poet’s work, chosen from volumes that have been previously published.

What do we learn from that tribute?  First, there are students of poetry, people who concentrate upon the craft, who would be interested in the possibilities presented by a new poetic form, the unrhymed or blank verse sonnet.  But more important than that, there are ordinary readers of poetry, and plenty of them.  Poetry is still a living part of the common life.  People care about it.  I recall that when Kermit Roosevelt was at his prep school in Connecticut, he wrote to his father, Theodore, to say that he’d come upon the work of a young and accomplished poet, a writer who specialized in plain-spoken dramatic monologues.  The poet needed a job.  Could something be found for him?  Kermit shared the poetry with the President, who agreed that it was very fine, and that was a boon for the career of Edwin Arlington Robinson.

Then we learn why Bliss Carman was beloved.  It was because he loved the things that his fellow Americans loved, even if they did not live in flinty New England.  He loved the rocks and the rills of his adopted home; the common flowers, the birds, the very soil.  He felt the pulses of the natural world.  This was not, for him, an academic or ideological exercise.  Quite the reverse.  It was the movement of a heart to a heart, of the deeps speaking unto the deeps.  And it resounded in the hearts of his readers.

Here, for example, is the third in a series of three unrhymed sonnets, to the now seldom-seen bluebird, herald of spring:

It is the gladdening note our fathers heard

On Marchy mornings when the wind grew still,

Telling them winter would not always last.

How soft it falls, how plaintive yet how sure!

Clear as a call from heaven, that cheery cry

Heralds the reawakening of earth,

And sets the frost-bound urge of life astir.

Is he not of that blessed company

To whom Saint Francis carried the new word –

Of Joyous resurrection and brave life –

The gospel of Victorious ecstasy?

In the bright hush he pauses to repeat

His canticle of transport undismayed.

Those are quite finely crafted lines.  Carman knows what he is doing.  He imagines, justly, that his ancestors in this land heard those same notes of the bluebird, and drew from them the same good news, that winter would not always last.  Then he delves farther into the past, and more deeply into the message of the bluebird’s soft, sure, cheerful call.  He imagines – and he expects his readers to understand him – that the bluebird was there too when Saint Francis preached the Good News of resurrection.  The natural rhythm of the returning spring is now raised into the key of Easter, but gently, even by way of a rhetorical question.  Then the last two lines sum it all up, quietly and simply.  Things are hushed; the bluebird sings; it is a very canticle; and the lingering of winter will not dismay us.

My point isn’t that we ought to read the poems of Bliss Carman.  It is that that world beyond the stars, that world that was our world, brought forth poets like Carman, and readers, not specialists, who enjoyed those poems.  As the saying goes, you are known by the company you keep.  What company we keep can be divined pretty quickly from mass entertainment.  What were those strange beings like, the ones who kept company with such a poet?

The flyleaf of my copy suggests an answer.  It is a handwritten dedication: “Mama, from her boys, on her birthday, Nov. 26, 1932.”  This book I’m holding was once a birthday present to a woman who loved poetry, from her grown sons, back in 1932, three years before my own mother was born.

I have no idea who she was or what she or her husband or her sons did.  They probably had gone to college.  I gather that from another surprise, another message, found on a folded sheet of paper inside the book, evidently treasured for its words of perennial wisdom and encouragement.  It is titled, “President Schurman, of Cornell, to the graduating classes, 1898.”

I’ve heard a few commencement speeches in my day.  The typical commencement speech is notable for its colloquial, even flippant detachment from humane learning; its flattery of the ill-educated students who are, alas, going to “change the world” and “make the world a better place” and, in the footsteps of innovators, bustlers, tyrants, and fools, “make a difference”; and its propounding of some ephemeral political cause.  But here is what President Schurman said, and what the mysterious owners of this book saw fit to preserve:

You should everywhere be exponents of the intellectual life.  The public have a right to expect that you will exhibit, as the fruits of your education, a reasonable judgment, a breadth of intellectual horizon, an imagination responsive to high ideals and a heart that beats warm with noble and generous emotion.  Nor is this the end of our expectations; though not all of you may have gone far in science or history, or philosophy, yet I should be surprised and saddened if I thought any of you left this place without a deeper sense of the beauty and order of nature, the dignity and pathos of human life, and the ever-encompassing mysteries of Divine Providence.  It is the unseen that is eternal, and in it our human life is rooted and grounded. — We are entering a new era in which ideals, character and conduct will be the chief thing.  My heart’s desire and prayer is that you who go from us today may prepare yourselves for this better era – nay, may fulfill the divine law of your lives, by an unswerving fidelity to Duty, which is the oracle of God within the soul.

I can’t reply to this message in a bottle.  The best I can do, I do.  I pass their message along.