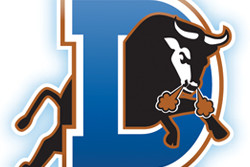 Only an idiot would really miss the old Durham Athletic Park – or, if not an idiot, then only someone who hadn’t actually spent much time there and didn’t know that at the old stadium there wasn’t enough electricity available to cook hot-dogs except to boil them; or that the only way to keep the circuit board cool enough to light the scoreboard was to set an electric fan blowing over a bucket of ice onto it; or wasn’t there when the urinal trough fell off the wall in the men’s room between innings one night and the Bulls’ owner Miles Wolf and the groundskeeper had to pick up the darn thing and carry it to the trash heap behind the right field wall, with fans stopping them along the way to relieve themselves openly before Miles and the groundskeeper and women and children and probably the mascot Wool E. Bull, too, for crying out loud.

But Bob Guy is not an idiot and, sitting at the bar he now owns in Raleigh, he does not seem to miss the dilapidated field where the minor league Durham Bulls used to play. And yeah, he’s seen “Bull Durham.” As the Public Address announcer for the Bulls from 1982 until their cross-town move and subsequent promotion to the AAA affiliate for the Tampa Bay Devil Rays in 1994, he was there for all those shaggy-dog adventures, and more, calling out over the bleachers names mostly obscure and forgotten, but occasionally noteworthy in the recollecting: Chipper Jones, Ron Gant, Andruw Jones, Steve Avery.

When we attended a game together recently, though, the nostalgia for the old park began to poke through a little. Sitting in the bleachers behind home-plate, Bob seemed to know everyone over the age of sixty. They would shuffle by, some working as attendants, some in concessions, some simply decades-long fans, and at each one Bob would holler and receive a holler back in return, ghosts of the old days calling to each other in the shadow of Durham’s old tobacco warehouses and auction houses, now refurbished and reappropriated for office and retail space. The gains and losses for the Bulls over the last two decades are the same as for the city of Durham, itself. Both are either “cleaner and safer” or “sanitized and inauthentic” depending on a person’s point of view, politics, and generation. Bob merely calls the new stadium (now nearly twenty years old, itself, and hardly “new” anymore) a “better place to watch baseball”, and leaves mostly unsaid the assumption that other, less tangible, qualities of the club have, perhaps, been lost. What may have been lost, though, remains vague and elides with the common longing for one’s past. In any event, for Bob, the primary grievance on Saturday was the stadium policy of not allowing a single patron to purchase more than two alcoholic beverages per visit to the concession stand.

Baseball purists are always telling me what a frustrating place a minor league baseball game can be. It’s too family-friendly, they tell me; too plastic, too eager to please. For someone trying to record the game’s every swing in obscure  baseball hieroglyphics or predict to their girlfriend in that moment of  hushed expectancy before a pitch, that it is now that the runner on first base is going to steal second, the game can feel like visiting the Prado with a class of second graders. At a minor league game, in that hushed, expectant moment before the pitch, the purist will most likely get knocked in the head by one of the giant inflatable toys distributed at the front gate to the first five hundred visitors to the park.

Bob has a measured view of the tacky stuff, though – defending the craft and artistry of costumed mascots; damning the between-inning fan-participation games. The difference between the two is less clear to me, but Bob’s abiding love and respect for the former and untempered hatred for the latter is compelling enough for me to trust that there is a difference, and an important difference at that. He proudly describes his greatest legacy at the club to be his principled refusal to degrade the PA microphone by offering play-by-play commentary on the fan shenanigans. At Bulls games, even now, when so much else has changed, it is a microphoned man out on the field that introduces the sumo fights and kiddie games while the man in the press-box remains silent and dignified, writing his memoirs, perhaps, or getting his shoes shined.

I asked Bob what minor league baseball offers to fans that major league baseball doesn’t. Without hesitating, he pulled his ticket stub from his pocket and pointed to the price: $9.99. “That’s what the minor league offers,” he said, “It’s cheap.” But that can’t be all, I answered. He grudgingly agreed. It’s still the same game. There’s still a guy on the mound throwing 97 mph fastballs to another guy sixty feet, six inches away and that other guy still manages, somehow, mysteriously, to smack the ball into play. It’s still a miracle. Still the hardest feat in sports. And no amount of public relations gimmickry can take that away.

In the seventh inning the rain started falling hard. The grounds-crew dashed into place, rolling out the tarpaulin, and the groundskeeper paced fitfully. It’s a good, close, 3-2 game, but the fans start to leave anyway and the players look like they wish they could go, too. The guys in the home team dugout want to go home to their families. The guys in the visiting dugout want to go back to the hotel and shower. Neither side really cares who wins. Each man is worried about his own performance, his own paycheck. The games just don’t matter in the minor leagues. We’re there, though, because the game  remains beautiful. And the players are there because playing baseball is simply what they do, and, even though it’s the minors, they do it better than you or I will ever do anything.

After a few minutes, the rain became torrential and a teenager jumped onto the field and slid across the tarp like it was a slip-and-slide. The soggy fans cheered. Then he was arrested, and they all booed. Bob turned to me and said, “you know the best part about not working for the club anymore?” No, I said. “Not having to stay till the end.” And so we got up and left.

Bob relishes the paradoxical serenity of his pub in the empty, early morning. He sits there at his bar each morning with a cup of coffee, a danish, a newspaper, and each of the four above-bar television sets  tuned to a different news show and waits there for the day to start and for its cast of characters to make their various entrances and exits. The food and beer vendors arrive with their loads, the laundry service drops off a bundle of clean aprons, the plumber comes to fix a leaking faucet. Then the staff arrives. Then the patrons.

When you’re in Bob’s company, the Bulls’ stadium feels like an extension of his pub – each one its own stage with its own cast of characters, with Bob, himself, hovering, director-like, over it all. Which is why, I suddenly realize, Bob has such affection for the sweating geniuses who wear the Wool E. Bull costume and holds in such derision the upper-management and public relations staff who allow spectators to participate in the theater of the game. You might as well invite the customer to come behind the bar to pull himself a draft, or let the bum in the first row of a Broadway show to step up to dance a bit. For Bob, the baseball club is a family of actors that extends beyond the players on the field to include the folks in the press-box, the guys chalking the infield, and the ladies selling caps. It’s all one show. And a good, one at that. In that respect, the current ballpark provides as good a stage as any on which to set its troupe of actors to perform baseball, night after summer night. The hot-dogs are certainly better.