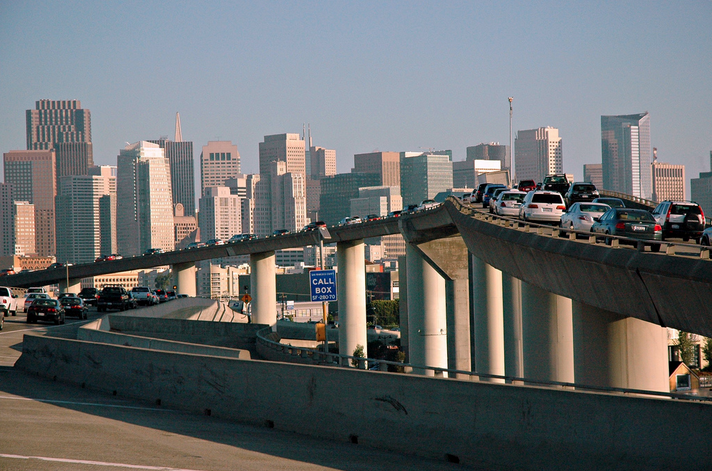 A year ago I started exploring my traffic navigation app, wondering what advice it would give about the various routes I took to work in southern California. I found the device quite enlightening about my 28 mile commute. For example, before the app, on my way home from Malibu to Moorpark, when faced with the daily slowdown at the 101/23 interchange, I would often leave the highway for another, less clogged route. The traffic app, whose prime directive was to minimize my commute time, almost always sent me directly into the traffic jam in the afternoon. The other routes may have been less clogged, but they still took longer; if I wanted to get home as quickly as possible, I needed to endure the traffic slowdown.

Our experience with the traffic app has been radically different when we are in unfamiliar places, and must rely solely on its guidance. For the six weeks I have been on sabbatical in Princeton, and my wife and I have been adjusting to New Jersey highways and local roads. In both cases, we have found the traffic app to be frustrating, unhelpful, and potentially dangerous. When my wife and I were in the car together on these trips, frustration with the app led to frustration with each other, as well, to the point where I now refuse to use it as a real-time navigational tool.

Our first experience with the app in New Jersey, driving a rental car from Newark to Princeton during morning rush hour and after a redeye from SoCal, was nearly disastrous; exiting the turnpike we were dumped onto a fast moving highway which divided immediately; our frantic attempts to move into the left lane resulted in a near accident and many angry fellow drivers. We ended up in a tangle of one-way streets in an apartment complex, from which our app was unable to extricate us, although it doggedly recalculated our route.

We have found that the app does not look far enough ahead, so it orders us to make turns too quickly, not giving us enough advice about which lane to be in before a turn so that we will be prepared for the next turn. All of this is compounded by roads full of veteran New Jersey drivers moving at high speeds. When we inevitably make a wrong turn (sometimes not even knowing we are doing so), the app’s new directions are often impossible to follow, because we are in the wrong lane. The app never berates us for our mistakes, but its pauses and beeps as it recalculates our route are a sort of rebuke. Its very patience and forbearance are at times intolerable, like those of a clerk whose outward calmness and imperturbability are a cover for an unadmitted inability to help.

We have also found that the traffic app (besides making our driving experience frustrating and unpleasant) makes it difficult to learn the local roads. The more we rely on the app, the less we are able to master the terrain; we find ourselves repeatedly making the same mistakes, unable to abandon the app’s imperfect guidance for our own knowledge of the roads. This more than anything has convinced me to abandon its real-time help, and to use it only periodically on long trips, for information about traffic patterns and the fastest routes.

Our app trouble is the trouble most people have with machine-generated views of reality and of how to navigate it. The traffic app abstracts from the world of traffic so that it can plan its (our) way; all it “sees” are vectors, rules for navigating, and moving points which represent the drivers who are plugged in. Using this schematic of the road patterns and autos, it assumes that human beings will navigate the tangle in the same way a computer program would: go 2.5 miles and turn here, bear left in 500 feet, make a left turn followed in 300 feet by a right turn.

Our navigation trials remind me of James Scott’s book “Seeing Like a State.” In this groundbreaking work, Scott highlights the differences between the abstracted views of the world which guide map-makers and social planners and the kinds of local knowledge and behaviors which guide and inform much of social life. The more we relied on the app to guide our trips – the more we view the world the way a traffic app sees it – the less we were able to accumulate and make use of the local, less standardized, but very effective local knowledge of how to “get around.”

What does the app miss that is so crucial to the way humans navigate? For one thing, because it doesn’t see the navigation problem as a whole, but as a series of disconnected steps which cumulatively lead to ‘arrival at your destination’, the app unbundles sequences of events which human drivers naturally put together. Here are the app’s instructions once we get on the Jersey turnpike with the intention of crossing the George Washington Bridge into New York:

It’s not clear from these instructions that you basically take I-95 the whole way. Every time the highway divides, or there is a significant merge, the app gives you instructions. Contrast this with the instructions I would give to someone taking this route: “get onto 95 N and follow the signs for the George Washington Bridge. Don’t worry about whether you’re on the upper or lower deck of the bridge. Oh yeah, the toll is $14 so if you don’t want to pay it I’ll give you directions to the Tappan Zee.” The computer app is unable to give these simple directions because it doesn’t see the signs, it doesn’t care to save you money on tolls, and it doesn’t see the turnpike between New Brunswick and New York as one stretch of road.

The app also leaves out the feel of human navigation: the local landmarks (the New York skyline, the Pulaski skyway, but also things like the overgrown bushes that make certain intersections dangerous), the behavior of other drivers, and the road signs (which even in New Jersey are often helpful). It is blind to the tacit cues which guide humans on the roads.

Since I have abandoned the app, I have quickly learned the local roads (including the daunting oddities of route 1). One mistake made without a traffic app is worth three or four failures to follow the app in the same situation, because I am focused on the road and what it is teaching me, not on the app and my frustrations with it. Without the app I also feel freer to try a different route, just to learn what is there. Sometimes I need to know the names of the roads, but often I do not. With the app I always felt an urgent need to learn what street I was on, but I only needed the street name to communicate with the app, not to navigate the road.

I have also found that my wife and I get along better when we rely on our jointly employed navigation skills. Our trips from Princeton to Boston are still long, but they are now more pleasant – it is no longer us against the app, but us against the highway. We pool our understanding of the map, our memories of the routes we have taken before, and our attentiveness to the real-time cues we receive from the highway and the traffic. Three’s a crowd when the third is a non-human, abstraction-driven calculating machine, inviting us to drive along on the computer-generated map, instead of zooming along on the concrete and asphalt, in the real world with its clouds, trees, buildings, and good company.