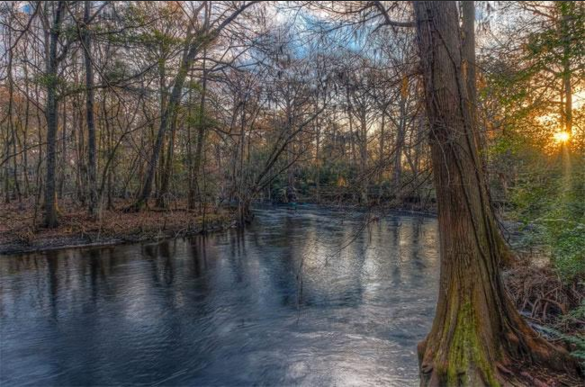 Last summer, on a typically hot South Carolina day, my family gathered at my grandparent’s farm to scatter the ashes of my grandfather. Aside from family, my grandfather loved three things above else in the world: a good cigar, his dogs, and his farm. As a boy and even now as an adult, I found it difficult to separate my grandfather from his land. It only seemed natural to me then that he wanted his ashes buried on the farm near his favorite hunting dogs and the Edisto River.

The Edisto flows from the Sandhills of South Carolina to Edisto Beach, winding through the cotton belt of the state for several hundred miles. The North Fork of the river flows though my grandfather’s farm in Wolfton, a small community just outside of Orangeburg, South Carolina. My grandfather’s family settled Wolfton generations ago and has been associated with Wolfton and Orangeburg ever since.

Over the years, the Edisto played an important role in the lives of my grandfather’s family and in the life of their community. It witnessed personal triumphs, disasters, and countless transformations.

During the Revolution, several battles occurred along the Edisto in Orangeburg. During one unfortunate skirmish, American soldiers, allegedly led by grandfather’s forbearer, were attacked, resulting in the death of a band of patriots. Despite this failure, the forbearer in question somehow managed to receive an even more senior commission in the War of 1812.

Before and after the Civil War, the Edisto supported farming and planting in the cotton belt. Further inland than many of the large coastal plantations, Orangeburg County was home to some plantations but also numerous small farms.

At the close of the Civil War, several hundred remaining Confederate troops clashed with the advancing Union Army in Orangeburg. The city of Orangeburg created the Edisto Memorial Gardens at the site of the battle. The Gardens are now home to 175 acres of azaleas, camellias, and roses, and attract hundreds of thousands of visitors every year.

After the Civil War, my grandfather’s grandfather built a railroad, attempting to connect some of the smaller towns of South Carolina. The property he acquired in the process later became part of my family’s farm and included portions of the river.

Today, the Edisto still supports farming in a region that has both changed and remained the same. Although farming remains important to the area, manufacturing has increased. Poverty remains. The city of Orangeburg has experienced periods of decline and revitalization. The Edisto is now an important recreational attraction. “Friends of the Edisto” was established to preserve the ecological treasures of the river. My grandfather was among the group’s members.

Capital H History aside, the Edisto has also played an important role in my family’s history. My grandmother remembers swimming in the river as a girl. My grandfather spent countless hours alongside it. My cousins took trips to the river as children, launching handmade boats on voyages to the Atlantic. As a child, I shamelessly borrowed water and moss from the river for a hastily constructed third grade history project.

More than anyone else in our family, my grandfather appreciated the uniqueness of the river and the land surrounding it. To him, the farm and the river represented his past and future.

As a boy growing up in a small southern town, there were few sources of modern entertainment. With no newest and best technologies to distract him, he was fortunate enough to experience the joys of his county. He and the other children of Orangeburg spent many summer days at the Edisto. To hear my grandmother describe the fun of her summers spent at the river would make any young person willing abandon their latest Netflix binge for a chance to experience one of those summer days.

My grandfather’s relationship with the river continued into his adulthood. He eventually built two boat landings on the Edisto at his farm. As a husband and father, he took my mother and grandmother out on the river for boat rides. During these trips, they’d decamp at a sandbar and enjoy a picnic. Afterwards, my mother and grandmother would float back down the river to a landing with my grandfather obligingly following along in the boat.

The Edisto would only rarely bring trouble. On one memorable occasion, an alligator managed to find its way from the river to the pond behind my grandparent’s house at the farm. My grandparents sensibly recognized the danger the animal posed to themselves and more importantly to their dogs. With the help of a few friends and what I must assume was a relatively agreeable alligator, my grandfather managed to transport the animal back to the river. Thankfully, the gator knew it had overstayed its welcome and had decent enough manners to continue further downstream.

Ultimately, the land and the river linked my grandfather’s parents, his grandparents, his friendships, his wife, his children, and their children. His memories were tied to the place. A few years ago, he confided in me that in his old age he simply enjoyed riding around the farm, pausing at various spots to reflect back on his life. Simply put, he knew himself and the larger world by the place.

At my grandfather’s funeral, I read a quote from Wendell Berry: “And the world cannot be discovered by a journey of miles, no matter how long, but only by a spiritual journey, a journey of one inch, very arduous and humbling and joyful, by which we arrive at the ground at our own feet, and learn to be at home.” If my grandfather was anything, he was a man who knew what it meant to be at home. As a far wandering millennial, this was a powerful lesson for me. Even as South Carolina and the nation change, place still matters.