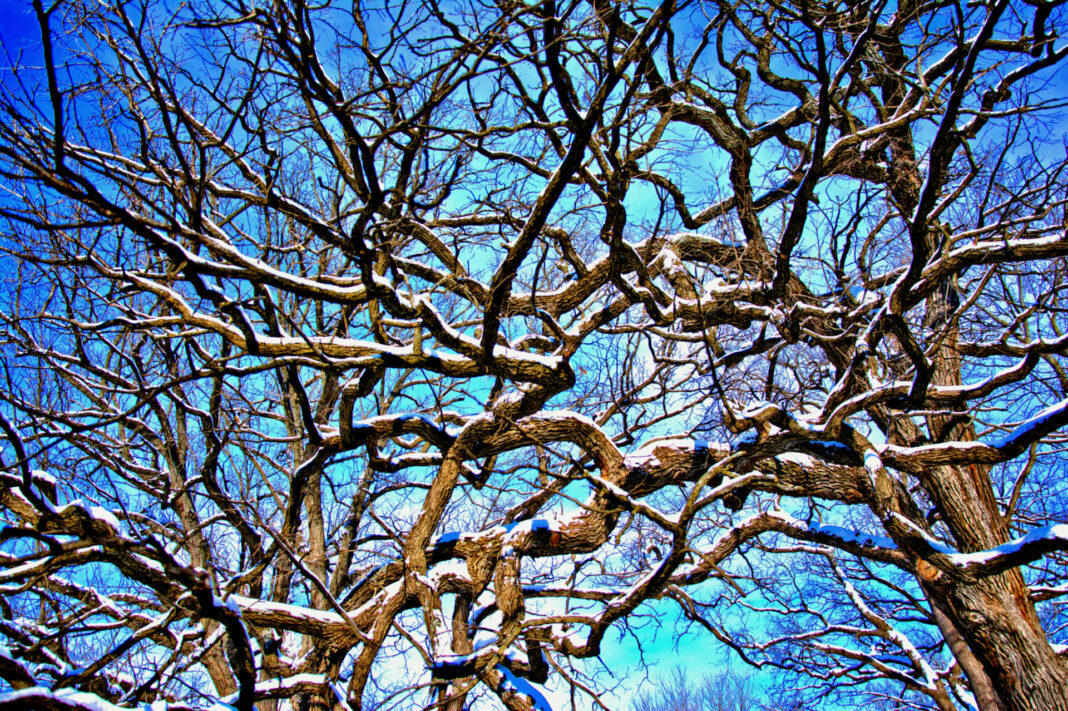 Jackson, MI. In the opening paragraph of “The Uses of Adversity,” Wendell Berry outlines a recurring narrative, one in which cultural corruption and disorder drive humans back to the wilderness where they are individually renewed and so prepared to contribute to social renewal:

It has been useful to me to think of As You Like It and King Lear as versions of the same archetypal story belonging to human experience both before and after the plays. This is the story: in the instituted life of a society “things fall apart” because the people of power have grown selfish, cruel, and dishonest. The effect of this is centrifugal: the powerless and the disempowered are sent flying from their settled domestic lives into the wilderness or the world’s wildness—the state of nature. Thus deprived of civil society and exposed to the harshness of the natural world and its weather, they suffer correction, and their suffering eventually leads to a restoration of civility and order.

This is not necessarily a pleasant process. Berry, quoting a speech from As You Like It, notes that “‘Sweet are the uses of adversity’ may oversweeten the point, and yet we know that adversity can be corrective, sometimes indispensably so.” The wilderness may be uncomfortable, but sometimes we need to be discomfited. Such paradoxes are the subject of Nick Ripatrazone’s new book, Wild Belief: Poets and Prophets in the Wilderness. Ripatrazone lives in New Jersey, the most densely populated state in the US, and this may not seem like a promising place from which to ponder the mysteries of the wilderness. Yet he relishes memories of boyhood camping trips and regular opportunities to run through the woods near his home. Further, he rightly notes that wilderness does not only consist of vast, unbroken tracts of land but can also include pockets interspersed within more domesticated places. As he concludes in a discussion of Berry’s understanding of the term, “Wilderness … is not defined by scope or volume; there is no minimum acreage to reach such designation.” Wilderness may be unexpected and mysterious, but it can also be at the edge of our neighborhood.

In places, the book’s analysis remains thin, and some chapters read more like collections of quotations rather than developed essays. Hence the book never quite comes together as a book; it provides a set of standalone reflections on authors rather than tracing an overarching argument that unites these meditations. The back cover promises a consideration of “saints and storytellers from across the ages”; for the most part, however, Ripatrazone focuses on recent American authors. After the introductory background on the biblical valences that wilderness has and the ways that the desert fathers and Saint Anthony embraced the wilderness, the book jumps ahead to Gerard Manley Hopkins. The rest of the book considers American authors active during the latter part of the twentieth century: Wendell Berry, Terry Tempest Williams, Jim Harrison, Thomas McGuane, William Everson, Mary Oliver, and W.S. Merwin. Hopkins seems shoehorned into this discussion, and the book would better cohere if it included an explicit narrative frame explaining why these particular authors were included and how we should understand the broader landscape that these American poets and storytellers inhabit. Yet if the book fails to develop a sustained argument about wilderness, faith, poetry, and prophecy, it succeeds admirably in provoking readers to attend to the enduring paradoxes of wilderness.

Ripatrazone calls the wilderness “a fearful and sacred space.” Poets who enter this space receive visions that are both “foreboding and revelatory.” The sense of awe invoked by the wild can shade toward exuberance or terror. Thoreau’s famous account near the end of Walden articulates this dynamic well:

We need the tonic of wildness,—to wade sometimes in marshes where the bittern and the meadow-hen lurk, and hear the booming of the snipe; to smell the whispering sedge where only some wilder and more solitary fowl builds her nest, and the mink crawls with its belly close to the ground. At the same time that we are earnest to explore and learn all things, we require that all things be mysterious and unexplorable, that land and sea be infinitely wild, unsurveyed and unfathomed by us because unfathomable. We can never have enough of Nature. We must be refreshed by the sight of inexhaustible vigor, vast and Titanic features, the sea-coast with its wrecks, the wilderness with its living and its decaying trees, the thunder cloud, and the rain which lasts three weeks and produces freshets. We need to witness our own limits transgressed, and some life pasturing freely where we never wander.

It is not always pleasant to witness your limits transgressed, but it can be profoundly illuminating. Ripatrazone cites Terry Tempest Williams on the humility that is necessary to receive such disorientation as a revelatory gift. From this posture, we can indeed receive wildness as a tonic: “However tenuous our relationship with the wilderness, with enough humility—of the eremitic or ascetic kind, or otherwise—the wilderness serves a salvific function. The wilderness saves poets and prophets in various ways. It is a comfort, a balm, a source of necessary confusion. Its expanse expands us.”

We see this link between the wilderness and a necessary confusion repeatedly through the Bible and subsequent literature. God appears to Abraham in a great darkness, Moses on a mountain, and Job from a whirlwind. Ripatrazone traces the connections between John the Baptist and the desert wilds. It seems that when our human orders and visions are destroyed, when all has gone dark, when we are lost in a dark wood, we may be finally able to receive a divine revelation. Drawing on Heidegger, Ripatrazone concludes that the result of such an encounter with wilderness “is a comfort through discomfort: a transformation in which we humble ourselves, and that clearing grants ‘access to the being that we ourselves are.’”

The discomforts of the wilderness are clarifying in ways that so many of the discomforts suffered in contemporary society are not. The Kafkaesque bureaucratic nightmares in which the unemployed or indebted or sick get lost do not generally provoke divine revelation. The urban, social, technocratic labyrinths imaged so vividly by Frank Norris or Harriette Arnow or George Saunders seem like intensifications of a depraved civil society rather than corrections to it. Can there be spiritual visions in urban settings? Of course—Thomas Merton, who features repeatedly in this book, had his famous vision in Louisville, at the corner of 4th and Walnut. But even that vision may have been enabled by his contemplative solitude, and it is the natural wilderness where we more often recognize the arbitrary or vicious aspects of human culture and find the possibility of renewal. One of the ironies of wildness is that inner or social confusion can be calmed and clarified by a foray into natural wildness. It is a kind of homeopathic treatment for the bewildered soul. In part, this may be because modern industrial society has become increasingly inhuman.

Ripatrazone rightly considers the ways in which even the wilderness is a construct of modern human culture. One of the poets he discusses, W.S. Merwin, was born in New York City and raised in New Jersey, and he saw the West as a “landscape of imagination.” He’s right; the Western wilderness in particular has been mythologized and culturally created. Yet as Ripatrazone argues, this doesn’t mean that the wilderness is fictive or unreal: it is both “myth and purest reality.” It is a cultural construct to imagine parts of creation untouched by human hands, yet the ecological realities of the non-human world remain real beyond the powers—and failures—of human perception and description.

This issue of cultural construction also points to why writing about the wild parts of creation can train us to better experience them. As Ripatrazone writes about Mary Oliver’s poems, “Oliver’s precise and patient descriptions of small pockets of wilderness—the forest at town’s edge, the strip of trees separating properties, a quiet and secluded shore—offer her readers a liturgy of observation. Great writers of the wild can help us better see so that we might go back to those spaces with a closer sense of texture.” There is always a danger that such artistic responses may become ways of reasserting human control over the untamed: “To name the wilderness—to map it, to sing of it, to attempt to save it—is to place a human vision upon that which is wild.” And so Ripatrazone commends the approach of these prophets and priests of the wild, those who go to wild places with faith that they will discover something unexpected, unforeseen.

Such poets and prophets may be able to teach us to see the adversity experienced in the wilds as being useful and even “sweet.” Particularly in a culture that values comfort and convenience, we need to listen to those who have encountered wilderness with the humility and attentiveness necessary to receive its instruction. Reading Ripatrazone’s reflections, and returning to the work of the writers he commends, may be just the tonic we need. The wild has repeatedly been a necessary source of wisdom and redemption for decadent human cultures. As Berry reminds us, “Shakespeare saw, and wants us to see, that the forest can be corrective and restorative to disordered human life.”