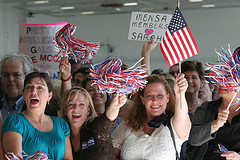 Rome, Kentucky. This week my dear Cousin Kate is otherwise occupied Marie Antoinetting around that patch of pigweed and thistle she calls her garden, and has decided not to post on her usual Thursday in favor of spending her time constructively.  You go ahead honey, I told her, and I’ll be awfully glad to jump in as I have been inspired by FPR’s recent online debate and its extensive write-backs and cross-links.  So here I am and hello to you all.

Let me introduce myself.  My name is Cassia Clay Pigeon, and I’m Kate’s sixth cousin once removed, and I live in Rome, Kentucky, “The eternal hamlet Pop. 350,” but I’ve lived all over.  Only after two decades of travel to broaden the mind I can say that wherever you go there you are, and that as my new husband was moving back to Rome it seemed best I come too.  I now live on a hobby farm here on the edge of the Bluegrass, though dear Kate, always quick to compliment, says I raise nothing but my neighbors’ blood pressure.

Though a throwback to the reformist Republicanism of my famous progenitor Cassius Clay, I come from a long line of yellow dog Democrats, so I certainly have never called myself anything as unprogressive as a “paleoconservative,” and I hardly know why Kate does when she came to the Right via metered verse of all things.  But having fallen in with a certain crowd as practically an infant she continues with bathetic loyalty to go about her business with the ideological equivalent of a great red P sewn to the front of her dress, despite the obvious fact there’s not a thing to be gained from it.  As I well know from working with the McConnell people.  What’s the point of paleoconservatism? I ask her sometimes, when Generation X hardly knows what you’re talking about, Generation Why can’t even spell it, and there’s no raising money with that kind of talk?

It’s certainly been an eye-opening debate, and if you excuse me for mentioning it those other folks had you Porchers absolutely on the mat.  Their arguments are unanswerable, though goodness knows a bunch of you tried.  I can hardly wait for Miss Dottie at the Historical Society to tell me for the 57th time how much she loves living in a small town–I’m going to pop right back and ask if she realizes talk like that led to the pogroms of Europe.  If I’m lucky, she’ll cry.

But the big thrill for me was to realize that I too can have my own little corner of the Right, and it is all just a matter of finding a term that fits the zeitgeist of our current zeit.  True, it’s only on high holidays I darken the door of the dear church I’ll call here (for privacy’s sake) “St. Willie in the Weeds,” but I am nevertheless and by all means a Protestant and as such am temperamentally inclined toward division.  With the great Walt I can say We are large, we contain multitudes, and if we contradict ourselves so what?  Who has the right to stand athwart history and cry stop?  Even Mr. Buckley never did anything so silly as that. Or to tell us what to call ourselves or where to raise our money?  I say long may the Right have all its -isms and -ites, and I’ll discard a Burke and raise you two Teddy Roosevelts while enjoying all the fisticuffs that so enrich blogging.  It’s a wise fox that has his own domain name.

But what to call mine?  Well: this “oh-oh” style of naming has to be credited (in its more creative phases at least) to David Brooks, whom I’ve always found to be sound even if he did leave the Journal and is writing for the New York Times.  But as the admitted Boboconservative parent of Bobos in Paradise he is probably territorial about anybody else using that particular term, even though it’s clearly under forty words and I would argue Fair Use.  But—let it go.

Okay, I thought, there’s Compassoconservatism.  But “compassionate” is really a Bushism, and we are all just a teeny bit tired of that family, aren’t we?

Okay again; we folks on the Right are red meat men and women, united in our defense of animal protein sources like steak and eggs, plus I live in the country, so perhaps I could be a BovoOvoAgroconservative?  (I admit I’d had a G&T when I came up with that one.)  But knowing New York as well as I do I quickly realized I couldn’t be encapsulated by any reference to agriculture, and anyway just try tweeting that on your iPhone.  I needed something I could type in without visibly aging, so that was out.

It took an hour of thinking but I went through the alphabet piece by piece. And then voila, I had it:  Mojocon.

What do you think?  Here’s what I think.  As a term, in addition to being tweetable, punchy, and not the least bit resembling standard English and hence hip, Mojocon exudes all that I want.  It has the mystery (and eeriness) of an indefinable power.  It shows an open-mindedness to international cultures and influences.  It gives a wink to the virility so essential to our officeholding class.  And it honors my love for The Doors.

There’s no grass growing under the feet of this rolling stone, I can tell you.  I’ve already got a website, the inevitable (and fortunately available) www.mojorising.org.  I’ve started raising funds for the semiannual journal MojoConfidence, which will have essays, book reviews and poetry.  (But no rhyme and meter, Cousin Kate. If I wanted rhyme and meter I’d write a limerick, dear.)

I’m also working on an essay about my childhood (working title: “HoJo is my Mojo”), a prose ode to the 70’s as a turquoise-and-orange decade that hardly gets its due–the motel is a symbol of course–a time of fun and of relative innocence, and when I think about what the dickens it is I want to conserve my childhood seems as good a place to start as any.  Or better.  Where else am I going to start other than the start of myself?  I don’t understand these people who are “all about” the expansionism of the New Deal, or federalists and antifederalists, or (to give an extreme example) those ancient Greeks whose idea of haute cuisine was to use rotten fish juice as a condiment.  As my son would say: If those guys are so great, how come they’re dead?

It’s been great hogging the microphone here on your veranda, everybody. Link on over anytime.