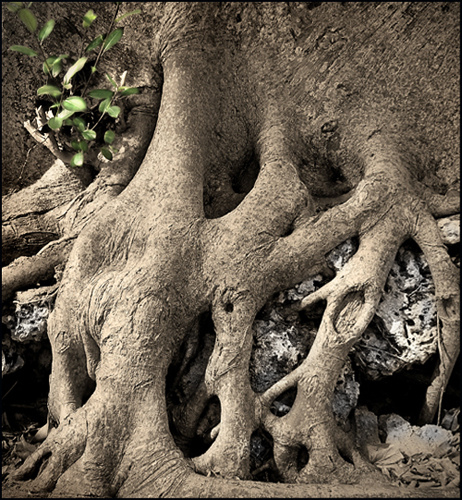 Henry County, Kentucky. If the young artists I know have any overmastering desire, besides becoming famous, it is to be original.  And by that they typically mean creating something new and different, doing something not done before.

I don’t wish to overstate the matter, as there is a lot of art from the last hundred years to love.  But in general, given the mood of our age and also several thousand years’ worth of artistic predecessors (who have already discovered everything from the Archaic smile to the Petrarchan sonnet), something new-and-different these days often means something atraditional, violent, irreverent, shocking, ironic and/or ridiculous.  This is a trend with a long arc, and so it was that the century just past was the century of Dadaism, Surrealism, Existentialism, Nihilism, prepared piano for wholly unprepared audiences, and naked performance art.

Wendell Berry, who has proposed an alternative way of thinking on so many matters, gives originality a different definition in his latest book, a collection of literary essays titled Imagination in Place (just out from Counterpoint).  “Original” is a fairly old word with numerous meanings, but the meaning Mr. Berry takes to be the best is that quality of a writer who has plumbed his origins, meaning especially the place he lives and the people of that place.  If the writer is a good one, he may come to know, understand, and finally imagine his own place so well that he speaks for his place and knows what needs to be said about it.

If you are a religious person, you could say Mr. Berry is talking about a writer’s call to witness.  If you are a nonreligious but ethically-minded reader, you might say he wants a writer to do justice to his native ground. (Or hers; plenty of his appreciative essays are about women.)

Ego underlies any creative act, as it must, since any artist is the filter and the voice for what he is driven to say.  But there is humility as well as rootedness in the kind of originality Mr. Berry loves, a humility that will not be found in the work of those who use their past, their current city, or their color-gathering trips abroad as veins of ore to be mined in order to further a career or to enable themselves to “find their own voice” (a phrase Mr. Berry clearly dislikes).  Art, for him, is an attempt at wholeness of expression that must come from a desire for wholeness and haleness in the life the artist is living, and cannot be separated from it.  In some way—through imagination and (for the fortunate) inspiration–a writer becomes a medium for his own piece of ground and the people who are, like him, bound to it.  Mr. Berry explicitly praises the work of Wallace Stegner and James Still for just this lack of separation.  And it can’t be happenstance that most of the writers Mr. Berry celebrates here have been in some way conservationists.

Occupied as he always is with precise language, Mr. Berry argues that there can be no national imagination; a national or international language is an Esperanto of vagueness and cliche.  It is only our own town or neighborhood that is specific enough, and someday knowable enough, to enable a capable writer’s imagination to imagine it clear and whole.  Imagination is the organizing force for originality, and imagination starts not in the mind, but in the world our mind inhabits and comes knowingly to love.  In other words, it starts in a place, with its bare toes in our own muddy mother earth.

If what we see and experience, in our country [i.e. our local place], does not become real in imagination, then it can never become real to us, and we are forever divided from it.  And for [William Carlos] Williams, and for Blake, imagination is a particularizing and a local force, native to the ground underfoot.  If that ground is not in a great cultural center, but only in a New Jersey suburb, so be it.

For those writers who do not live in their natal place, he offers comfort in the example of the poet Jane Kenyon.  Ms. Kenyon was a Michigander who married the poet Donald Hall and then moved with him to his family’s farm in New Hampshire, a place that was home to him but foreign to her.  There, like Ruth, she “understood her exile as resettlement,” Mr. Berry writes, and spent the rest of her life culturally homesteading in both fear and hope.

Patriotic Work: Wendell Berry’s The Need to be Whole: Patriotism and...

The One World On Offer