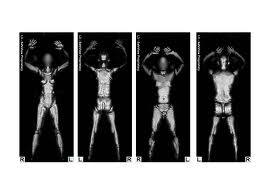 Let’s just get the basics out of the way: the new “advanced imaging technology” which the Transportation Security Administration is spreading out at hundreds of airports around the country is a ridiculously invasive, disrespectful, and only dubiously effective way of making certain nobody brings anything remotely suspicious onto an aircraft. For my part, I’m signing up for National Opt-Out Day, at least in principle. No one in my family will be flying anywhere on November 24th, but I will be flying the first week of December–to Hong Kong, no less–and then my whole family will be flying to Hawaii in January. I don’t know what sort of embarrassment and delays and possible harassment my wife and I will choose to subject ourselves to, or tolerate our children being subject to, but when I’m on my own, I’m choosing the pat-down. I would far prefer to share the humiliation of being groped in public by a TSA flunky than pose like a criminal to allow someone in an isolated room (no matter what promises the TSA makes regarding privacy) to view my naked body.

Does this make me a civil libertarian, banging on about individual rights? I suppose, depending on how you define the term and what you understand it to encompass, then yes, in this case I am. But it might be better expressed as feeling offended at the disrespect, the lack of civility and decency, which these measures imply. It treats passengers on airlines as if they were pieces of meat, in essence. What sort of basis for a polity is that, in which those wishing to do something perfectly legal must bodily demonstrate to some other randomly empowered person that they fit some standard of appearance or behavior? This goes way beyond subjecting individuals to scans to make sure they are being truthful when they are asked if they are carrying anything dangerous, or verifying their identify, or randomly selecting people for questions and/or searches; this is treating the body itself as suspect, as a carrier that must be vouchsafed for. Can I come up with counter-factuals that would suggest such an approach is sometimes necessary? Sure: that’s why prisons and police forces occasionally make use rubber-gloved cavity searches. But the indignity involved in such a transaction suggests that the person being so treated has been reduced to less than a citizen, less than fellow member of the community. Is that what the fear of terrorism leads us to–allowing ourselves and our fellow citizens to be so reduced?

I doubt it; what is more likely is that the rhetoric of safety has provided sufficient cover for an ordinary government bureaucracy to treat its business as a mere technical problem, to be solved by continually refining technology and training processes, and of course, by hiring more people and buying more machines. All other concerns fail to register in such an innocently managerial environment. I find myself comparing all this to the enormous–and paranoid–build-up around the White House and other federal buildings and landmarks during the 1990s and early 2000s. Yes, on some level, such berms and barriers and obstacles made these buildings safer…but they also made them uglier, more removed, less accessible. (Not to mention unnecessarily causing traffic headaches up the wazoo, as anyone who remembers how downtown DC physically changed over that decade could tell you.) Is that really a way to show respect to the citizens whose taxes, you know, pay for those buildings? Oh, but of course, that’s a question of aesthetics and community and democracy, and when put up against the individual demanding his or her safety, and a government bureaucracy empowered to act on their behalf, such questions have little purchase.

For someone whose sympathies lie on the left side of the political spectrum, I’m not especially worried about the rise of the Tea Party and the Republican sweep in the last election; despite their numbers, I really don’t think they’re in a position to drive our national government in any particular direction whatsoever, and consequently I expect that the next two years will show Obama engaging in Clinton-style triangulation and the Republican majority in the House putting out brush fires, and little else. It would be nice to see in the TP a genuine drive for the decentralization and redistribution of political power, as opposed to just a simplistic, unprogrammatic demand that the federal government stop exercising so much of it, since in my view, the latter demand only sets the stage for a vacuum regarding health care, or the environment, or labor and business regulations, which private and corporate interests will happily step into. But in regards to the TSA, I’d be delighted to see some “simplistic” refusals–a demand to simply say no to this increasingly ridiculous operation that, however genuine its intentions, has obviously become locked into a way of thinking about airport security that sees the whole matter as a balance between “privacy” and “safety,” with all other values–like dignity–being non-quantifiable and therefore irrelevant. Yes, I think it’d be wonderful to see the Tea Party movement turn on the TSA, perhaps if the organization’s latest actions can be painted as “unconstitutional” somehow. Let’s try to make sure that Glen Beck has to fly on a commercial airline sometime in the near future, and see what he thinks of it all. No doubt he’ll find a way to connect it all to an Obama-inspired communist conspiracy, but at least that might mean TSA could find itself facing a serious Congressional inquiry, for once.