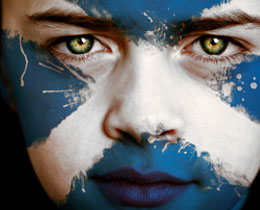 Hillsdale, Michigan: While Americans are gearing up for fireworks, automobile sales, and burnt hot dogs, the Scots are debating whether to declare their independence from the United Kingdom.   It took Americans one revolutionary war to gain autonomy from the British government and then a civil war to arrive at the proper arrangements between member states and the national whole.  But the Scots, who gave us democracy, enlightenment, whisky, golf, and blue grass have figured out a much easier route to independence from and relationship with the U.K. — hold a referendum.

American journalists and pundits don’t seem to be very interested in the upcoming vote or what it might mean for larger constellations of political power except when world leaders comment.  A few weeks ago President Obama told reporters in Brussels that he hoped the U.K. would remain “strong, robust and united.”  Hilary Clinton also felt obligated to opine when asked by BBC reporters: “I would hate to have you lose Scotland. I hope that it doesn’t happen but I don’t have a vote in Scotland.”  Meanwhile, Pope Francis has left plenty of room for his many interpreters by comparing the situation in Scotland to independence efforts in Italy and Spain: “You have to study each case individually. Scotland, La Padania [northern Italy], Catalonia. There will be cases that are just and others that are unjust, but the secession of a nation without a history of forced unity has to be handled with tweezers and analysed case by case.” Our American Lost Causers must be wondering where all that perpetual union ideology came from if a nation can simply opt out of an over three-hundred year old agreement simply by going to the ballot box.

Sorting out the relations between a nation like the United Kingdom and member nations like Scotland is of course a tricky business and if the state governments of the U.S. could bandy about the word “nation” instead of “state,” perhaps they might get more favorable attention from the nation’s governors in Washington, D.C., and even more respect from their own residents. The U.K. has already devolved powers from London to Edinburgh (and Belfast and Cardiff) but some Scots want enough control of local affairs to consider going it alone (but still within the European Union, ironically). After having spent several weeks in Ireland and Scotland I am still trying to wrap my mind around the complexities of British identity. In Northern Ireland, the unionists of course think that Scottish independence is silly since independence for Belfast would mean being absorbed into the Irish republic, the forerunner perhaps of Scottish independence. But in Scotland, union seems to be resented by a nation of roughly five million people (compared to England’s 53 million) who feel like many conservatives in the U.S. do, namely, that all the important matters of national life are being determined by distant governors in a centralizing and consolidating national capital. For anyone interested in following arguments for and against Scottish independence — from an expressly Protestant outlook — I recommend this debate. But those believers not on the Protestant side of the Christian aisle should also be aware that among Christians in Scotland, Roman Catholics favor independence more than any other communion. (“A study last month, funded by the Economic and Social Research Council, found 38% of Roman Catholics would vote yes, compared with 31% for members of the Protestant Church of Scotland.”)

The timing for independence, however, may be the major obstacle to convincing a majority of the Scots to vote yes. When the American freedom fighters declared independence they did not have to worry about the staggering levels of bureaucracy and finance that now go with being a nation-state. If you won the war for independence, you could establish a modest republic that allowed the limited functions of government to play out at the local level (and struggle to pay your war debts). But if Scotland declares independence this year, it will have to reckon with its membership in the E.U.,social services for the nation’s poor, what to do about its military, and even whether to continue its — count ’em — 26 universities. One professor from Edinburgh with whom I chatted believed that Scotland would have to consolidate its academic institutions if it declared independence since a nation of only 5 million could not sustain that many universities. Beyond the mere maintenance of universities, scientists at Scottish universities fear what will happen to research funding if Scotland goes it alone:

Citing their combined extensive experience and their “profound commitment” to Scotland, they said they have “grave concerns that the country does not sleepwalk into a situation that jeopardises its present success in the highly competitive area of biomedical research.”

The letter concluded: “We contend that Scotland’s research interests will be much better served by remaining within the common research area called the United Kingdom.”
As evidence, they said Scotland’s universities had won 13 per cent (£257 million) of UK research funding last year despite having only 8.4 per cent of the population.
This accounted for a third of Edinburgh University’s research funding, while the Scottish Funding Council provided only £21 million of the £121 million raised by Dundee University for medical research.

The remaining £100 million came mainly from UK Research Councils, charities based in England and the EU, the letter said.

Americans may be amused by the Scottish debates, but the situation should have some resonance among FroPo’s since part of the point of the Porch is to assert the importance of localism and to live like place is important. For that reason, some of us may be rooting for the Scottish National Party as it tries to rally votes for independence. But it also raises the question of the hardship that will inevitably come to the Scots if they declare independence. (SNP’s projection about oil revenues may be a tad rosy.) For instance, if I had to vote for Michigan’s independence from the U.S. I’d be tempted to cast an affirmative ballot. But I would do that more from my heart than from a head that knows whether this state would be better off managing its own affairs (and paying for them). Given the state of Detroit and the auto companies’ recent dependence on Washington’s helping hand, I’m not confident that Michiganders could do any better than the feds. Then again, if devoluion of federal government included relocating federal agencies around the country rather than having so many federal employees in Washington, I might vote no. Just imagine if Detroit could become the home of Health and Human Services and its 76,000 employees and $961 billion budget.

What Would the Father of Nationalism Say About Scottish Independence?

Cars, Individualism, and the Paradox of Freedom in a Mass Society