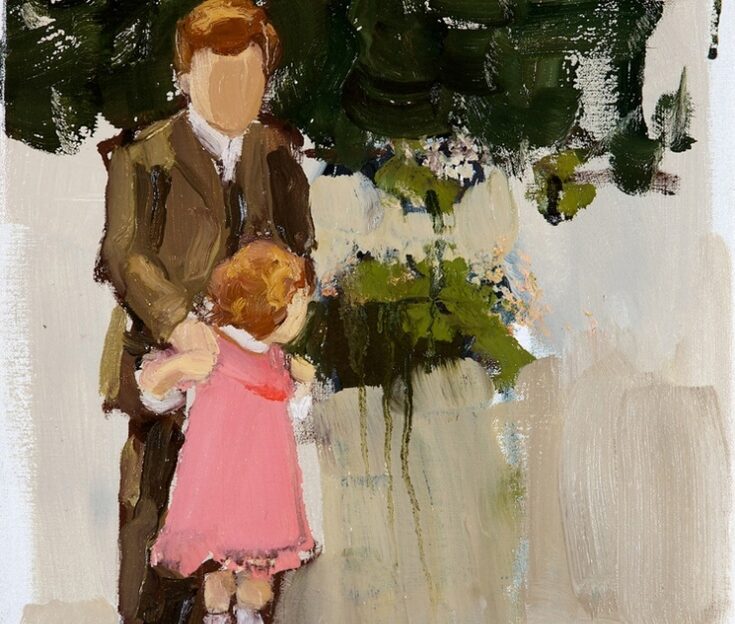 Goleta, CA. A few years ago, during a school potluck, some students came to me, upset. “There’s someone weird in the tree,” they said, “A kid.” Relieved it was a weird kid in the tree and not a weird adult, I followed them to the mulberry by the blacktop where a group of our students had gathered, all looking up into the branches. The gathered students looked disturbed. Two were openly crying. But I—a newly appointed head of a private elementary school in California—was ready for this situation: ready to be the capable, problem-solving adult.

I looked up into the branches, too. A child sat at the top of the tree, looking down at us. And the child wore a mask of some kind – a queer, Halloween-type mask that made her/his face a blankness. I instinctively felt my being contract. “Hello up there,” I said reaching for a lightness. “How are you?”

No response. “It’s time to come on down,” I added gently. The child wouldn’t move, simply continued to peer down at us. Or seemingly peer down at us—I couldn’t really tell. “Please come on down,” I said again, suddenly not sure why I was expecting the child to climb out of the tree. “What’s going on, Mr. Teddy?” a younger student managed. “Is that a person? Why does it have no face?”

“It’s just a neighborhood friend who’s wearing a mask,” I responded. The two students who were crying began crying louder, seeing that the faceless child wouldn’t heed my words. “Is it an actual person?” others now asked, a kind of panic setting in. “Why won’t it go away?”

The child in the tree wouldn’t move. “It’s just a neighborhood friend,” I repeated, assuming my best unruffle-able authority. But I heard a doubt in my voice, a strain.

I wasn’t about to force the matter to a crisis, so we ended up leaving the mulberry tree and walking away from the masked child. It was dusk, I remember. The two crying children ran to their parents to unburden themselves. The other kids ran into the lighted auditorium to inform their friends. I walked on, rattled and bewildered. Rattled and bewildered by some neighborhood prankster, this unwitting harbinger of days to come.

Our horror before facelessness is common. Think of the Ku Klux Klan. Think of that most unnerving of modern artists, Francis Bacon—how the faces of many figures in his paintings are smeared, distorted, nullified, gone. A Japanese folktale tells of a homebound merchant who spots a woman crouched in distress along the edge of a moat. Worried she’s about to hurl herself into the water to end her life, the merchant approaches. “Can I help you?” he inquires. When he touches the woman’s shoulder, he discovers she has no eyes, no nose, no mouth. Her face is a blank smoothness. The merchant screams and runs away, heading toward a distant light: the lantern on a noodle man’s cart. “What is it?” the noodle man asks, stepping away from the lantern on his cart and toward the merchant. “I saw the worst thing. I don’t know…I saw…it was this woman by the moat. She was crying. She turned toward me and she had no…”

“—Did she look like this?” the noodle man interrupted, stepping back into the lantern’s light. And he stroked a face which had no eyes, no nose, no mouth. It was smooth like an egg. And just as the merchant saw this second faceless face, the lantern hanging on the cart—poof—went dark.

Perhaps, whether we admit it or not, by masking our children at school we subject them to a fear like the one my students and I felt that dusk a few years ago under the mulberry tree; or the fear the merchant felt when he encountered two noppera-bos, faceless ghosts.

Life has a knack for upstaging purism, for confounding any kind of schema. (“The opposite of a great truth,” says the Zen teacher, “is also true.”) Life is ambiguous, murky, rife with situations that elude dogma’s capture. When the seas get rough, however, our tolerance of this is one of the first things hucked overboard. For example: have we felt into what it’s like to be a five-year-old girl walking into school in the morning? Have we felt into what it’s like to look up from her smaller stature to a welter of schoolmates swirling about her, their faces largely covered? What is that like? What is that like—precisely—to not see the faces of those other humans? Are they even humans? What if we could drop entirely—and I believe we can—into that five-year-old’s being for just a moment and see how she sees?

What ill ripples and estranging thoughts might course through her seeing everyone covered so?

And covered so herself, does she feel at home in the world? And besides possibly seeing others as dangerous and menacing, does she view herself that way, too? Does she feel, this five-year-old girl, the fact of her aliveness to be somehow profoundly destructive?

Many years ago I learned the Iroquois called death “The Being Without a Face.” Perhaps a more limber, more ambiguity-tolerant people might wonder if by seeking to protect ourselves from death at all costs, we’ve somehow inadvertently invited death in—into the longhouse, into the schoolhouse.

Please know that were you to say to me, “But Teddy, you are callous and out-of-touch for carrying on like this—my father died of COVID,” I would bow and fall silent. But I also bow and fall silent when I see the boy walking through the park before school with his mask on. This child, like so many other children, is haunted by a fear that’s most likely a phantom. As you may know, of the 74 million people in our country under 18, about 500 have died of COVID. Of those 500 it seems some (many?) had underlying health conditions. (And if you glazed over reading those last two sentences—we are all so numbers-hungry and yet numbers-numb—please consider reading them again. In the interest of seeing life steadily and seeing life whole, these numbers should be known.) So wouldn’t it be more sensible for that boy to fear riding in the car on the freeway with his texting-prone sitter? Or visiting the pool with friends?

Indeed, it’s easy to think—like many do—that the masking of children is a symptom of a large, unwieldly, and blind momentum portending a host of dystopian changes and that we’ve collectively gone nuts.

Relatedly, it’s easy to think astute those who bewail the modern world’s fetishizing of safety (“safetyism”) and our increasing tendency to shrink from unmediated experience, firsthand life. What’s it like to be a fifteen-year-old suddenly glad-aching with desire but also keenly—and most likely unwarrantedly—afraid to do what she desperately wants to do: finally and sweetly kiss? Will she be fated to touch-wary “hybrid dating” and “glow culture”?

And it’s easy to think that we adults have welched on a primary charge: to teach the children that the world—even with the fret and strife that accompany being human—is good, beautiful, and worthy of our trust. Social thinker and educational philosopher Rudolf Steiner wrote: “From the first to the seventh year, gesture predominates in the life of the young child, but gesture in the widest sense of the word, gesture that in the child lives in imitation.” What kind of gesture, one can only wonder, do they imitate now?

Finally, it’s easy to think—as we incarcerate ourselves and our children in risklessness; as we immure ourselves more and more in Instagram, Instacart, and Zoom—we are witnessing The Great Defection. That we are doing our level best to escape what can’t be escaped: the holy vulnerability of the grace that is earthly life.

Please also know that I write these words not only as a school administrator and teacher but as one who has been broken by grief. And a father, moreover: a father apt to secretly crying when his young children get the flu or one of the mail-order chicks arrives dead to the post office. In other words, I’m not—as far as I can tell—some armchair blowhard held hostage by untested bravado. Actually, I am, quite reliably, a softie. But a softie who observes first-graders on the playground trying to swallow their coughs (“It’s okay,” I tell them, “you can cough. Coughing is a part of life. Don’t be afraid…”); a softie who can’t shake the feeling that—regarding our response to COVID—we’ve become Procrustes with his violently simplifying bed. (One wants to shout: What about the crappy, pesticide-laced food so many kids eat? What about the plague that is their physical inactivity? What about the gadgets driving us, kids and adults alike, to suicidal soul-ruinous despair? What about the public-health epidemic that is the Internet? [Who isn’t dying by inches because of the Internet?] What about the other challenges we face that have been nudged aside and forgotten, and are actually graver than COVID-19? And what about the challenge underlying all these challenges: a crisis of meaning, of spirit, of a sacred hoop—to borrow from Black Elk—that is broken and scattered?)

So what to do? How should we approach the masking of kids in schools?

Perhaps the first thing to do is cut through the info-glut and Babel-ing tongues, and see.

See apart from conditioning, dogma, the identity-crutch of partisanship. See without the reassuring ground of fixed views under our feet. See without invoking the “resiliency” of kids.

See with a limber, don’t-know mind.

And such seeing might involve this inquiry: How are the kids doing now? What is it like to be them with all these changes afoot? (And just because a child doesn’t complain about something doesn’t mean that child isn’t feeling that something! How often I hear parents say something like: “Well, my kids aren’t grousing about things, so masking and all these other precautions must not be a big deal.” Really? Perhaps yes; but perhaps no. As poet Cesar Vallejo says, “There are blows in life so powerful…I don’t know!” In other words, some clobberings do not lend themselves to easy articulation.)

Next, we might ask: What else might be going on? What other forces might be at play here? To wit: If, as everyone on both sides agrees, children are still largely going unharmed by this disease (and thank you God), why are we so afraid for the children? What is happening? How is this not vast elaborate sciamachy? How is this not—to borrow from a friend who teaches in a prestigious high school in Los Angeles—“Safety Theater”? (And please don’t say it’s mainly a fear that the kids will spread the illness to others. I see parents every day. In town, on the street, at the park, at school. Fear for the children is acute and general now.)

And then what? What do we do after we’ve tried for a limber and uncaptured seeing? Do we mask the kids at school, unmask them, half-mask them? And what about the parents/caretakers in the school community? Should they have a say here? And what about the faculty and staff? And the government mandates? And Johnny Law?

What do we do?

I myself can’t answer all these questions neatly. But I humbly enjoin us to thoroughly and unreductively suffer them. To suffer W.S. Merwin’s pithy, vital insight.

Brass Spittoon: Digital Fatigue and Pastoral Care During a Pandemic