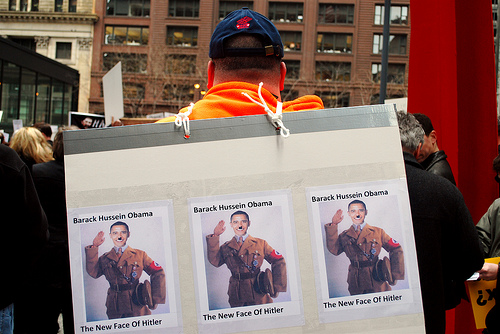 Claremont, CA. Yesterday I was walking past the post office in my latte-liberal, bohemian-bourgeois town, when I saw a picture of President Obama made up to look like Hitler. Two relatively sane-looking people were standing at a table covered in many copies of the aforementioned picture, and one of them was talking in loud – but seemingly sane – tones about how the President might really be a Nazi.

I wouldn’t say that my life flashed before my eyes, but I did think of a bunch of things all at once. I thought of Joseph Goebbels’ last speech, in which he described Nazi Germany as a “land of loyalty,” and then how two weeks later he and his wife murdered all six of their children. I thought of my high-school debate coach, who taught me that the cheapest – and tackiest – shot you can take in an argument is comparing your opponent to Hitler. And then I thought about some of the television I’ve been catching up on this summer.

For a couple of years now, both critics and audiences have been falling all over Michael C. Hall and Jon Hamm – and for good reason. The former, who plays Dexter Morgan on Showtime’s Dexter, and the latter, who plays Don Draper in AMC’s Mad Men, are both really talented actors working it in tough roles. Dexter Morgan is a guy who spends his days working at the Miami Police Department and his evenings with his family, giving him a kind of ordinary routine except for the fact that he has to schedule in time for his side hobby of murdering people. Don Draper is a successful advertising executive on the Madison Avenue of mid-century, with a wife and kids … and a ton of mistresses and a past that nobody really knows about. Oh, and his name isn’t really Don Draper.

These characters are men with secrets, men with so many secrets that I would call them Men Of Secrets, men made by all they don’t reveal. They don’t have incidental secrets like most of us have – like the I-pee-in-the-shower kind of secrets that Glamour magazine is fond of revealing – which we keep from other people but probably don’t say much about who we are besides the fact that we are human. Dexter Morgan and Don Draper have secrets that are constitutive, secrets that are bigger and more definitive than anything they reveal to other people. These are men who you only understand, if you understand that they are not in any way who they say they are.

That Americans have been drawn to such characters in the last couple of years should signal us, I think, to what is probably a growing level of fear and distrust in our culture. Americans seem increasingly preoccupied with the notion that what we see isn’t really what is. This is an understandable fear in a society which is so large, so mediated, so impersonal, and so technological.

At the end of the second season of Friends, which aired over a decade ago, Chandler tells the rest of the group that he’s met the perfect woman … on the Internet. After everyone gasps, since no one of them has done anything like that before, Phoebe asks Chandler how he knows that the person he’s talking to is really someone near his age, or someone who is single, or someone who is really a woman. Chandler freaks out. He hadn’t even considered that his late-night chatting buddy might be lying about those things!

Today, about 13 years later, Chandler’s shock seems quaint. Of course not all people looking for dates on the Internet are who they say they are. Of course you should be more wary about your interactions. You could be dealing with a Donald Draper, or a Dexter Morgan! Most of us have been humiliated at least once by the kinds of communication this technology allows, or know someone who has been humiliated: sending money to that needy Nigerian prince, having a private e-mail forwarded around the office, learning that the guy who is a prince online is a frog in person.  Our relentless exposure to the technologies of the “information revolution” has schooled us in the art of casual distrust.

Given the kinds of (technological, mediated, globalized) communications that increasingly dominate American life, a certain amount of fear and distrust in the culture is understandable. And to a certain degree, it’s not awful: in most human endeavors, a certain amount of skepticism is probably a healthy thing.

But too much skepticism – the kind that renders you incapable of trusting almost anyone, the kind that makes you hold onto your doubts and fears even in the face of contravening facts (since you believe the “facts” are probably manipulated) – is debilitating. It’s debilitating to you as an individual, since to think that way is to be anxious and angry all the time, to feel rageful and powerless and even paranoid. It’s also debilitating to social functioning, which requires at least some amount of social trust.

But there’s lots of that debilitating fear and distrust around, and lots of it gets directed at the President. He’s an easy target: a singular figure with lots of power, who most people fantasize has even more power than he actually does. And his real-life story – that he grew up in part on a foreign continent, that he is biracial, that he spends all his time with the kind of geeky people who know what derivatives are – means that the President embodies the massive global and technological and social transformations of the last half-century that have helped provoke so much fear and distrust in people in the first place.

I find it fascinating that people are accusing President Obama of hiding exactly the same secrets that Don Draper and Dexter Morgan hide. They say that, like Don Draper, he was not really born where he says he was born, and his background is not what he says it is. They say that, like Dexter Morgan, he wants to kill large numbers of people out of some messianic or misguided desire for efficiency.

The fantasies are powerful, and in a certain way they are intoxicating. They may even be, in a perverse way, kind of comforting. It is almost comforting to believe that in this day and age someone could live a life that is so substantially a lie – since the truth is that, with all of our personal “data” stored and mined and traded around by corporations, with our e-mails recorded by employers, with security cameras recording us at almost every business we enter and private DNA testers out for hire – there is very little room for any of us to do the equivalent of head west on a wagon train and start a new life. Part of the American Dream has always involved the idea of having the potential here to “start over” or “reinvent yourself,” but substantial reinventions of identity are not nearly as easy as they used to be. (It is telling, for instance, that the biggest lie Don Draper tells about himself – that he is Don Draper – can only be sustained because he lives in an age prior to DNA testing.)

It is probably the case that, as long as our privacies continue to shrink in these everyday ways, Americans will grow increasingly obsessed with the possibility of privacy: not only shouting about how much we have a “right to privacy” and that kind of thing, but also fantasizing about privacy. And keeping secrets – other people’s, or your own – may be privacy’s most emblematic act.

This brings me back to the Post Office, and to our Commander-in-Chief tarted up to look genocidal. It’s easy to attribute this kind of display of paranoia, as many people have, to particular ideological pundits or to racists or to those same dudes who brought us the swiftboat stuff. But those are all only part of the story, the vehicles of the moment for the sweeping, if disturbing, undercurrents of our time. For my own partisan reasons I’d love to see some of those particular elements thrown under the bridge, but the Left has its paranoid elements, too – all that speculation about Trig Palin’s parentage, anyone? – and I think the real challenge is to think about what might be done to confront the increasing fear and loathing in our States.