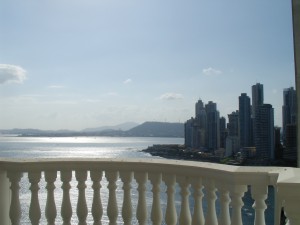 Claremont, CA. On the flight home, I read an issue of Delta Sky Magazine that listed the Panama Canal as one of “70 Wonders of the World.” The canal was listed, along with places like the Golden Gate Bridge and the ickily-nicknamed Chunnel, as one of the world’s great “feats of engineering.”

But during the month we spent in Panama, the canal – despite its dominant presence in the modern imagination – was not the engineering feat most in evidence.

Everywhere in Panama City, there is construction. I was driven into the city on a stretch of land that, a year ago, was not land. Land reclamation seems to be a principal municipal pastime, with spaces for roads and parks and condominiums being carved out of the sea every day. Skyscrapers that seem almost implausibly tall and thin – the structural equivalent of supermodels – are going up everywhere. Although Panama is a premier destination for birdwatching, all the cranes we saw were of the mechanical sort.

Next to all this, the current “megaproject” plan to expand the canal and effectively double its capacity in five years seems like just another thing on the to-do list.

Almost everyone I talked to in Panama City talked about the municipal building frenzy, and almost everyone seemed to look at that building frenzy with a Janus face. One man drove us around the city, lamenting the destruction of his old residential district one minute and imploring us to go shopping in one of the new malls the next. Another person told me that the best part about Panamanian beaches is that many haven’t been developed yet, meaning that they are still as pristine as they were in his youth; five minutes later he spoke admiringly of someone developing a new beach resort. And so on.

In such exchanges, I kept thinking of Marshall Berman’s description of the “tragic struggle,” in All That Is Solid Melts Into Air, that is the modern relationship to home. On the one hand, moderns speak often about a home that is gone and the desire to go back home, “back into our own childhood, back into our society’s historical past”:

“At the same time, modernists do not try to blend or merge themselves with their past – this distinguishes modernism from sentimentalism—but rather to ‘bring it all back’ into the past, that is, to bring to bear on their past the selves they have become in the present, to bring into those old homes visions and values that may clash radically with them – and maybe to re-enact the very tragic struggles that drove them from their homes in the first place.”

“In other words,” Berman writes, “modernism’s rapport with the past, whatever it turns out to be, will not be easy.”

On our last full day in the country, I talked with a local businesswoman who, like so many others, sighed as she talked about the Panama of her youth, and then of the city’s enthusiasm for vertical construction.

“The problem is that people think a new building going up is the same thing as progress,” she said. She paused, then noted that the construction boom has seemed to coincide with an increase in Panama’s already troubling level of income inequality, not to mention what she described as a kind of national existential crisis.

Well, new buildings are a form of progress – a form of progress that is easy to measure and see (and from which it is easy to amass material profit). But, as W.E.B. DuBois pointed out when he described his visit back to the Tennessee village where he had his first teaching job, it’s hard to know what new buildings are worth when their construction seems not to improve – and may even be said to worsen – the lives of people and the land around them. (Think of the canal: It’s easy to see in retrospect that, for all that the Panama Canal has done to change global transit and transportation and commerce, the human and environmental costs of building it were, and may continue to be, substantial.)

Today, I’m not sure if there are any social and political questions we bump into with more frequency. They are endemic, and they are inescapable. And I think Berman is right that there is something indelibly tragic about them.

When we got on the plane yesterday, I was glad to escape the Panamanian humidity. The atmosphere is different in southern California – at least in the literal sense. But in the grander scheme the atmosphere here is the same, as it is perhaps everywhere in the modern world, with these questions about what we take to be progress hovering in the air.