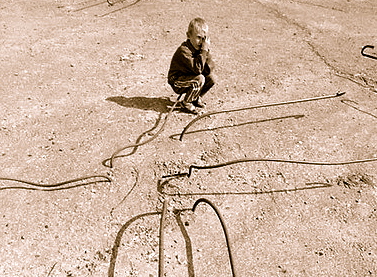 In the late 1970s, my grandfather’s older brother, already in his nineties, was pressing his almost deaf ears to a little portable radio still hoping to hear that “the Americans are coming” to “save us” from Communism. He died in 1979 while seesawing some wood in his courtyard.

Before the Communists came to power, he had been quite prosperous. He had land, mills, tractors, horses, and a house in downtown Botosani beside his house in the countryside. He had been one of the first in his county to own an automobile. He had been a National Liberal politician. He went to Law school in Bruxelles. And, more importantly, he was of peasant and country priest stock. He was not born into money. He just worked hard and showed true grit in managing both his inherited land and the land awarded to him by the pro-Agrarian Romanian government for his brave fighting in World War One.

After the Communists came, both he and my grandfather, who had been a public notary, were branded by the Communist officials as “tools of the oppressive bourgeois reactionary regime”. But my grandfather’s brother still managed to survive and to buy that small radio whence, he hoped, the “Voice of America” might someday announce the American landing and our liberation.

I’m not sure about other parts of the world, where the U.S.A. chose to involve themselves in various liberating endeavors during the last twenty years. Romanians really looked forward for the coming of “the Americans”. For us, “the Americans” were not, as Joseph de Maistre would say, just some counter-Soviets, but something different from the Soviets. And if the Soviet occupation of Eastern Europe meant an overpowering dose of social engineering, “the Americans” were supposed to free us from any social engineering. To this extent, the coming of “the Americans” was supposed to be something akin to a Conservative revolution as it would bring back not some government-regulated and mass-enforced normalcy, but normality itself: a life built around personal and public integrity, and without having to kowtow to some ideological “commissar” in order to survive, a life in which you could prosper in an honest way.

Sadly, the fall of the Communist regimes in 1989 did not signal a return to normality, but a new level of social engineering. In the aftermath of 1989, a Hungarian student, who came to study at an American college, said to her professors: “To us it feels like jumping from Orwell’s 1984 (Communist Hungary) into Huxley’s Brave New World (Neoliberal U.S.A.)”. And indeed, after 1989, Romania and the rest of Eastern Europe have had Brave New World on top of 1984.

Grassroots America has not been wiped out with the ruthlessness and method that presided over the eradication of grassroots Eastern Europe. Here, nobody selected the best farmers, engineers, politicians, students, workers or priests to imprison, brainwash and/or kill them. In Eastern Europe, Communism destroyed not only the intellectual elites, but the professional elites, the grassroots, too. That is why it is harder for Romanians to oppose the Brave New World. By leaving it spineless, the Communists turned a nation into a population to be scattered or molded at will. The Romanians are not lacking in energy, ideas or lucidity, but in those organic forms of social cohesion that Communists almost utterly destroyed. Subjected to decades of social engineering that aimed at pruning their natural elites, Romanians have been, since 1989, an easy prey for the Neoliberal managerial elites.

The Neoliberal managerial elites, largely subsidized by American foundations such as the Soros Foundation for an Open Society, came with their own ideology (Neoliberalism), their own “party line” (about an “open society”), their own big corporate interests, and their own “commissars”. The European Union added its bureaucratic heavy-handedness and its own brand of political correctness to make things even worse. The corporate Neoliberal networks of the “Right” attacked any voice arguing for a truly Conservative movement with arguments of the reductio ad Hitlerum sort.

Twenty years passed since Ceausescu fell and Romania does not have a genuine Conservative party yet. We have phony conservatives, who once worked for the Securitate (Romanian secret police) and are now nostalgic after the “good old Communist times,” phony libertarians, holding well paid governments jobs, and neonazi kooks. And above all, we have an intellectual Neoliberal/Neoconservative Right whose main job is to delegitimize any genuine Conservative discourse and to tell Romanians that worshiping both God and Mammon is the real thing to do.

The Communists falsified our history by exaggerating, at their convenience, our Slavic (in the ‘50s), or our Thracian (in the ’70-’80) roots. The Neoliberals are falsifying our history by shriveling our “patriarchal” past in the required politically correct manner. The Communists confiscated the peasants’ land and crammed them by force into factories. The Neoliberals have bought cheap the peasants’ land and then scattered them all over Western Europe to do menial works. The E.U. claims that we have too many peasants (50% of the population is living in the countryside), that we must halve them at the very least. The idea is to abandon anything having to do with a subsistence agriculture in order to focus on E.U. subsidized large farming and monocultures. It is the second big enclosure.

In the immediate aftermath of the Communist collapse, there was much talk in the West about the truly Dickensian conditions in the Communist orphanages. But there is no talk today in the Western media about the ordeal of the present generation of children; many of them are growing up in Romania raised by their grand-parents or their relatives as their parents went to work in the affluent E.U. countries. There have been many cases of seven, eight or nine-year-olds committing suicide because they missed their mother, gone with the wind of an illegal job in the E.U..

When I pointed out such tragedies, induced by an economic engineered mass migration to the West, a Romanian Neoliberal advocate retorted: “ It is the gift of liberty”. If one criticizes consumism, the Neoliberals answer with “anti-anticonsumist” arguments. Financed by Coca-Cola, by Atlas Foundation, by the Soros Foundation, or by Microsoft, the Neoliberal minions are the voice of globalization in Romania. We have, thus, not only a remittance economy, but a remittance intellectual life, too.

Any argument in favor of Distributism, of a peasant and a small property economy, any preference for the local over the global is rejected by Neoliberals with sneers about “paseism,” “fascism,” “obscurantism”. Whatever does not come from “the West” is “provincial”. And the only thing that comes from the West through these mercenary channels is global financial capitalism and its appended moral “values”. The old Communist internationalism has been replaced by the new Neoliberal cult of the “global markets” and the religion of those abstract, as fluctuating as the stock exchange, “human rights”. Even the historiography of Communism has fallen prey to this fashion: the Communist regime is now criticized mainly for its oppression of minorities. Yes, it is true that various minorities have been subjected to various degrees of persecution during the Communist regime. But not all of them and not for the most of time. To criticize Communism based on its transgressions of “diversity,” a Neoliberal core value good for business according to the University of Illinois scholar Walter Benn Michael, is misleading. It is missing the point to state that the Communist regimes were mainly the tyranny of a minority (the Central Committee and their secret police guards) over a majority. And missing the point that the vast “white working classes” (peasants and workers) were the main targets of Communist oppression means missing the possibility to rebuild the country according to the real priorities after the fall of the Communist regime.

The Communist regimes might have been “sexist,” or “racist”. And yet their main crime was their horrific attempt at dehumanizing whole peoples and wiping out many of their elites. In encouraging, subsidizing a politically-correct criticism of Communism, the West legitimized a politically correct discourse and deligitimzed any discourse that might have opposed both Communism and Neoliberalism on historic, organic, religious, communitarian grounds.

After the Communists eliminated our organic elites and replaced them with ideological guardians, the Neoliberals have dissolved our traditional discourses so that there is no moral center left. Indeed, many Western political analysts talked about how some former Communists redeemed themselves by becoming big capitalists. As if you could redeem yourself for terrorizing a nation by subsequently looting its economy.

In between the Communists throwing overboard whole social classes and the Neoliberals “debunking” all Eastern European patriarchal “myths” that could have helped bring Romania on its feet – there is not much ground left on which to build a vigorous participatory democracy. Neocon inspired social engineering transforms people into freeloaders of the West or into xenophobic partisans of the East (as an extreme nationalist reaction to it). The only way out of such an unhappy situation would be an alliance between middle America and deep Romania along with a strengthening of a non-corporate, non-social engineering oriented American presence in Romania. We still wait for the Americans. But please stop sending in the Neoliberal suits instead.

Limbaugh vs. the Front Porch