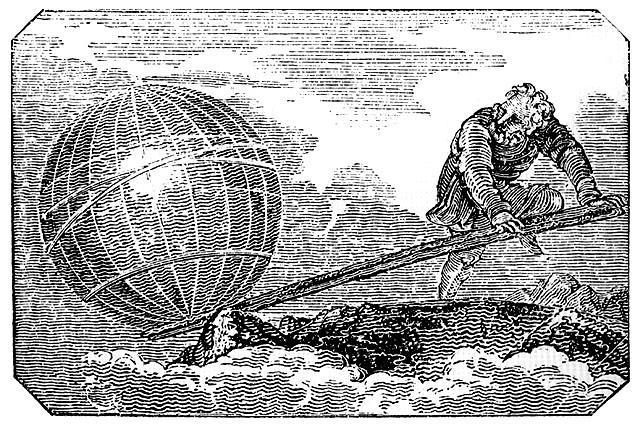 “To the famous Archimedean boast:  ‘Give me whereon to stand and I will move the world.’.  Rabelais answers: ‘I move with my ship; and the waves of the world give way.’”    –John Cowper Powys

One could choose a less fruitful thread around which to crystallize some thoughts befitting what Pope Francis recently called the ‘piecemeal’ beginning of World War III , than festering on Archimedes, (287 BC-212BC) At least that’s what I think. Consider him: Archimedes the ‘super villian‘ designer of multitudes of weapons-from-a-distance, or what we might call proto-drones; Archimedes the precursor of Cartesian scientism and the Rawlsian political dreams of “original positions” and, for my purposes here, Archimedes the namesake of those dreaded Punctum Archimedis or ‘Archimedean points’ defined by Wikipedia as a “hypothetical vantage point from which an observer can objectively perceive the subject of inquiry, with a view of totality.”.

It’s a reference and an expression that, “comes from Archimedes, who supposedly claimed that he “could lift the Earth off its foundation if he were given a place to stand, one solid point, and a long enough lever.” Control and power from a distance seem to be the allure of these accursed punctums. Fear and anxiety seem to be their source.

Archimedes of Syracuse—engineer, mathematician, physicist, inventor– is therefore a godfather of all of those hypothetical, gnostic ways of looking at the world, (both individual and corporate), that presume an escape from, or transcendence of, all particular human viewpoints and the world of human relationship, and which feign to look upon the world and human events from a God-like, rootless, fleshless distance.

Here and there attacks have been written on these gnostic, floating viewpoints that hypothetically hover above us somewhere, and the vantage point from which we rooted earth-dwellers look like the “dots”, the kind that Orsen Wells as villain Harry Lime saw from atop of Ferris wheel in The Third Man and famously asked:

In the area of theology, I think especially of Fergus Kerr and his Theology After Wittgenstein as a sound exposé of this worldview. In that book Kerr addressed theologians such Hans Kung and Karl Rahner by critiquing their presumed theological vantage point in the immaterial mind, a place removed from the body, from human community and from particular human interactions. Is it any wonder that, from this position of power and control Hans Kung is always writing and talking about a “Global Ethic” as if he even had the power to change the meaning of the word “ethnos” from its denotation of distinctiveness to an allusion towards homogeneity? Kerr’s attack on these punctums, (using Wittgenstein), and on this worldview is effective. It shows the falsity and myopia “hidden in plain sight” of the hypothetical view of the whole from high above the human fray.

When we think, then, the of actual point that Archimedes proposed as a place to move the earth with a lever, most of us probably think of something like a small, isolated, sterile, cold, dry, moon-like planet suspended above the Earth and from which one could view things “God-like” in their totality and move them with tools from a distance. It, (this place), doesn’t really exist, and yet the modern search for it, (to “see further”, to “to stand taller”, to be …“indispensable”, to quote Mad Maddy Albright), is leading quite literally to a hell on earth. Hold that image, though, because in order to combine forces with another potent line of attack against another aspect of this modern, gnostic worldview, I want to suggest a complimentary image: a Yin to the infernal Archimedean Yang. I want to suggest that we could look at the idea of Archimedean points from below, too, and the subterranean image that I suggest we could best use for this cold place of observation, devoid of community and human interaction is the bottom of a well, or a cistern.

I recall that somewhere in Pilgrim of the Absolute the French Catholic writer Leon Bloy wrote that the philosopher Schopenhauer “looked at the world from the bottom of a well.” I don’t know much about Schopenhauer, and so I don’t know if the accusation is accurate, but I do like the image as describing a certain type of thought. Referring to a false, lonely, sterile worldview of the people of his own time, the prophet Jeremiah famously put stated, “”My people have committed two sins: They have forsaken me, the spring of living water, and have dug their own cisterns, broken cisterns that cannot hold water.” (2:13). Not only have they ‘dug’ them, they’ve set up shop within them and do a lot of theology while living in them.

If Kerr and Wittgenstein’s critique of Archimedean points from above comes from the West, the line of analysis that critiques Archimedean points from below has roots in Eastern Orthodoxy and in the Church Fathers and is what Rowan Williams, Emeritus Archbishop of Canterbury referred to as a “watershed in modern theological thinking.” It’s the discussion of the world in terms of the distinction between ‘the individual’ and ‘the person’, with the ‘worst’ (the individual) being ‘the corruption of the best’ (the person). Suffice it to say that the sterile ‘individual’ tends to view the world from the bottom of a well while the ‘person’ has access to ‘living water’, in the world of relationships.

The Russian theologian Vladmimir Lossky is credited with bringing this ‘watershed’ distinction into prominence in the 20th century, but since his 1955 essay “The Theological Notion of ‘The Human Person’”, the insights have spread and have been developed far and wide even if the disease of “individualism” has spread even faster. Books have been written on it and I, myself, could go on for pages and pages regarding the distinction but, for the purposes here, I want to highlight the fact that ‘individual’ is characterized by its failure to recognize that he/she is born into a web of relationships and is relational from the get-go, and the ‘individual’, instead, seems to operate as if from a presumed place of “withdrawal”, (a well or cistern), which is also a place of fear, possessiveness and desire for security and control. In this sense, it’s just like those Archimedean points from above. Rowan Williams cites sociologist Richard Sennet in developing this theme:

If we begin from the individualist perspective, if we assume we are each of us a world to ourselves, that there is in us some solid core which sustains who we are independent of anything else, we shall indeed end up alienated from the destiny of others.  If we begin from the assumption that we are standing always in the midst of a network of relations, we don’t ever know whose destiny or whose reality will and won’t affect ours.  That’s a risky place to be, and it may indeed seem simpler, as Sennett says, to withdraw.

And evoking many of the themes found here on the Porch, he continues:

The best place (for an ‘individual) to be is a place where you can never be surprised.  We want to control what’s strange, and we want to control what doesn’t fall under our immediate power.  We’re uneasy with limits that we can’t get beyond because limits, of course, of whatever kind, remind us that there are some things that are just going to be strange and difficult wherever we are and however hard we work at them.  This can show itself in our corporate unease with limits, our exploitation of the environment, our expectation of an endless spiral of prosperity.

This language of ‘the person’ does take some getting used to as, true to form, even the idea of ‘the person’ itself can’t be controlled as it’s not reducible to a concept. As Williams says: “we’re left here with a kind of space, a kind of mystery, something we can’t really manage in third person descriptive terms.” Echoing this theme, Mark Patrick Hederman, Abbot of Glenstall Abbey in Ireland, says “We are born individuals, we become persons by the expansion of ourselves into the ante-chamber of the other.” I can’t be alone in thinking about a front porch as being somewhat analogous to the liminal places both Williams and Hederman mention.

Now it’s a commonplace of counseling and psychology that ceaseless change leads to feelings of vulnerability and our response to this vulnerability is often a regression to postures of “fear” and “control” and so, though I villainize Archimedes and his modern minions, I have to recognize that, as with ‘good and evil’, the line that separates persons from individuals passes as much through individuals as between individuals or groups. When I feel threatened, save for the grace of God, I can easily resort to thinking from the bottom of a well too.

I was at a meeting of Diocesan campus ministers the other week when somebody remarked that the lion’s share of the students entering college this fall were 5 years old when the Twin Towers fell. It’s understandable, then, that people naturally have and would continue to seek places from which to operate and do their thinking, both above and below, that are characterized by fear, possessiveness, security and control. To get proper hold of our plight, I think we have to see our fallen-ness as two-fold. The same ‘double whammy’, after all, is there which is echoed in Jeremiah’s diagnoses: “They have forsaken me, the fountain of living water”, (they have run to Archmidean points), “and they have dug themselves cisterns that can hold no water” (these Archimedean points are sterile, dry places of thought and tend to remake the world in their sterile image).

So how do we go from living as individuals to living as persons, from having our source of energy in dry cisterns to basing it in ‘living water’? Abbot Hederman says, (in the best book on desire I’ve read in years: Manikon Eros), it’s like a “change of currency” or “a removal of one fuze and its replacement by another.” In more theological language, (and evoking Augustine’s, “Our hearts are restless until they rest in thee”), he says it necessitates a change in how we see and live our restlessness and desire from “desire as having” to “desire as being”, and this is sometimes called, “putting on Christ.” This language of desire is also the language of love and the perfecting of this love, for “Perfect love casts out fear”.

I began by joking about Pope Francis having mentioned that we have already entered ‘piecemeal’ into World War III. With four teenage children of my own, and working with young adults, however, there’s obviously a part of me that’s fearful as ‘all get out’ about that reality. In some sense, we’re all powerless about this, but we can still steer our ship according to the few lights we can see. In this regard,I very much like Powys’ contrast, in the epigraph above, between Archimedean points and boats.   Boats are places where you can’t take the future for granted or pretend to control it. Boats are also, but not always, places of community. And they’re also, as the saying goes, places of faith, “as there are no atheists in an open boat.”