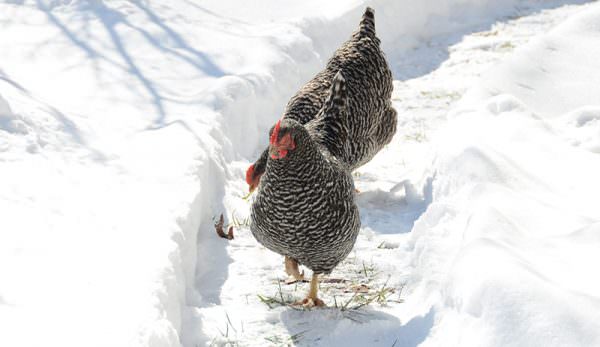 By eating lots of bugs and worms all summer long, and producing plenty of eggs, my hens put on a text-book exhibit of nature’s economy: they converted the free food of Dumb Ass Acres into free food for me, Chief Dumb Ass. They did this right up until the weather-change settled in in late November, the real and abiding change that augurs in its reliable way the usual long hard winter here in the frigid Mitten.

Yes indeed. They’d done all I’d asked of them. They’d scratched and pecked and bawked and entertained us as much as we could have hoped for. And, to boot, they’d followed and raced and chased after me like the college girls used to—when I was asleep and dreaming in Poli-Sci. My hens might as well have been in bobby socks on the silver screen, so obvious was their longing for the benevolence of my winning Danny-Zuko glance.

And so, in return for their putting their beaks to the valve stem of my inflatable bucolic ego, I tossed them the scratch grain-equivalent of that Travolta gaze, minus the greased hair above it and the tight jeans below. That is, I gave them the bonus features of table scrap and cracked corn and windfall apple.

Indeed: except for the impropriety of saying it (and to switch cinematic styles only slightly), I had almost said that these fawning chickens, right up until about the first of December, had been nearly concubinically obliging in that stylized Cecil B. DeMille sort of way. “It’s a man!” you could almost hear them cluck every time I Fog-Horned-Leg-Horned my way out back to check on them. And then in my aloof but lordly cock-of-the-walk way I would—Ah say Ah would—allow them a few more scratch grains and maybe, if charity moved me, some meal worms.

(And then, once the meal worms rained down on them, they would respond like the college girls of old: they would ignore me.)

But then wham! I noticed something that only autoethnographers conducting primary research with that strict exacting methodology of theirs are too dense to notice: Nature stepped in.

Nature stepped in in her wonted way and took complete control—over direction, production, costumes, everything. Especially costumes. For, in the wintery light-starved days of Daylight Swindle Time, all nine hens went simultaneously into a molt so thorough that by the time they came out of it I could recognize only one of them by her feathers. The rest I had to guess at by their behavior—and that, let me tell you, can be flummoxing. The barnyard is not a faculty lounge, after all, where behavior is as recognizable as it is predictable—and also more fully manured.

So of course production—egg production—ceased as well, and no amount of shouting into a megaphone from the director’s chair could procure the cooperation of these once-obliging, now utterly indifferent, prima-donna actresses. I had no control over the filming whatsoever. They had realized, as all creatures of this kind eventually realize, that they have all the power—that each morning the little switch clicks to default (“No!”), and all a man can do is hope that when (and if) the switch flips briefly to “yes,” and that slender window of opportunity opens, he’s close enough and skinny enough to jump through it before the whole rigged system reverts back to the default setting and he’s left contemplating the mystery of perforated pneumatic egos and the valve stems that do them no good.

[Editor’s Note: the Bar Jester was asked at this point to introduce a different governing theme, or we would have to suspend publication.]

Unluckily for my hens, the temperatures plunged and left me no time for flights of rhetorical fancy or elaborate conceit. The cold was not metaphorical, like in the default setting. It was literal—literally literal. Several consecutive nights below zero, followed by days in the single digits, meant I could no longer johntravlota my way across this hobby farm. Forget being worshipped. I’d have to save these girls.

So the first thing I did was start thinking like a girl. Then I did what I thought any girl would do: I went shopping.

[Editor’s Note: the opinions of the author do not reflect those of FPR, its associates, or The Austin Kitty.]

The first thing I bought was a heater for the water. That cost me about thirty-five clams. And, because I’m so smart, the hen house was already wired and ready for it. Back in the summer I’d sent a length of direct-burial UF cable underground to the Girl Cave and wired in both a receptacle and a light fixture. Both were working the night the gals and I arrived from Iowa in my ’03 Chevy. But, because I’m a Dumb Ass, and for reasons there was no time to investigate, something in the mean time had gone wrong. The power was no longer getting all the way to the hen house. It was there at the junction box right before the UF disappeared into the ground, but by the time it came back up for air at the hen house the power had vanished.

So I ran an extension cord from the barn, put a splitter on the female end of it (allowing for the possibility that the female end might not identify as female), and plugged in the heater for the water. The hens, in their best imitation of me at the end of Lent, drank greedily.

(I would learn in short order that the hens like to jump up on the rim of their water bowl, turn so that their derrieres are out over the water, and then drop chicken nuggets into it. Or, to speak plainly, the sisters shit in their own cistern. Heater or no, I would have to change the water every two or three days.)

Next I had to provide heat, so I bought a heat-lamp fixture (on sale for about ten clams) and a heat bulb—a red one, like for prostitutes—and secured them to the ceiling of the hen house. I then plugged the cord into the splitter, hoping I could bring the temperature inside my once pristine, now utterly befouled, chicken coop up ten or twelve degrees.

Turns out I could—on account of some forethought that I thought of aforetime. All I had to do was drop into place the little sluice-style door to the opening that leads out into the run, which helped retain at least some of the heat in an otherwise R-factor-less enclosure. I had added the door during the original construction. It was meant not to retain heat but to protect against whatever predator might manage to get inside the run. So that was serendipitous.

But come summer I’ll do the less dumb-assed thing and move the door to the outside of the hen house so I don’t have to ruin a pair of mucking boots and gross myself out getting to it every time the mercury drops.

Next I had to rig a light with a timer so that my birds could get their requisite twelve hours of quotidian illumination, so I did that as well. The timer I bought at my local hardware cost me about five bucks. I set it so that there’d be light until about 8 PM and again beginning at about 6 AM. Thus I became American literature’s second ecstatic patron of recurrent light.

And, by and by, with time and care and a feeder full of feather fixer, the hens began to come to life again, and finally to produce eggs, notwithstanding the long stretches of cold that the three hardest months of winter have smacked us with. At the moment egg-production is driving the price of eggs into the root cellar. If you live near me, you’re making lots of omelets for the price of cheese and capers only.

On some mornings, as I approach the hen house, listening and hoping for signs of life, my feet crunching on the snow and my nose hairs freezing in the annoying way of nose hairs freezing when the air is sub-zero, I could swear that my hens have learned a new monosyllable. It isn’t “bawk” exactly, though it ends with a “k.” The vowel is not quite as broad—more like a short “u,” I think—and the initial bilabial consonant seems to have been replaced with a fricative. It is almost as if they’re voicing displeasure—like when I hit my thumb with a hammer, or when a certain Front Porcher of Frisian descent decelerates on an easy chip shot and blows his chance at making double bogey.

Whatever the word is—and I dare not repeat it here, lest the Puritan editor come storming in again—those chickens sure say it a lot. Such mouths on these girls! It’s almost as if I’ve been pumping into the Pollo Palace not only heat and light but a looping tape of Lee Elia’s greatest rant.