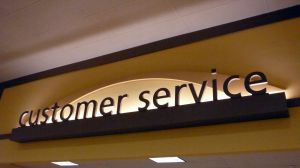 Hamilton, Ontario. When remembering a family-owned grocery store in rural Virginia, a first image comes to mind, even though I did not actually witness it. This is my boss, a woman standing all of five feet tall, in the front parking lot after closing time in her “shooting stance” with her gun out. While counting the money for the night, she watched two young men pull up in a car and start removing various firearms from their trunk. Walking around from the side exit, she got the jump on them. What she then said (edited for sensitive eyes) was: “I don’t know what (censored) you’re doing, but I’m the only one licensed to have a gun on my (censored) property. If you try to use that gun, you might hit me. But I will kill you.”  They left.

The second image I have is of their grown son, my manager, calling all of the store employees in for a meeting one evening and yelling for an hour straight at us. Some of the kids working there were less than cordial to the customers. A partial transcript (also edited for language): “Look! This is my store! This is my livelihood! And you are not going to put me out of business because you can’t be (edited) polite to the customers! When they come in, say hello! Stop whatever the (edited) you are doing and go talk to them! Get to know their names and what they come here for! And, you know what, ask them how they’re doing! The only way we can beat the big grocery stores is if you get to know these people and treat them better than those stores do!”

So we did. We knew all the customers, their kids, what sort of beer they drank, and spent at least half our working hours chatting (or jawboning, if you’ll indulge me) with them. We knew who the hunters were, whose daughter had leukemia, who was leaving her abusive husband, and we especially knew what kind of meat they bought. Our store had two specialties: our meat was excellent and we kept the beer fridge at one degree above freezing, so it was still cold when you reached your house.

The family also treated me, a kid working to save money for university, like a family member. When I finally went off to college, they gave me a “care package” that consisted of about two years worth of soap, shampoo, razors, and all sorts of other things. Every Christmas, we ate the turkey they gave me. When my grandmother passed away, they sent the largest floral arrangement at the funeral home.

When the store closed last year, it was on the local news. People who were interviewed compared the place to Cheers, where “everybody knows your name”. The reporter pointed out that the family had owned a store in that town- first a general store and then a grocery- for over a hundred and twenty years. They did not know that the family’s great-great grandfather had actually named the town.

Why did the store go under? Here’s where I repeat myself. First, a wave of people moved to town trying to get away from the big city and they brought with them box stores and enormous box homes. Secondly, the bottom fell out of the real estate market. People started defaulting on their mortgages, and more people were holding on by their fingernails. Suddenly, going to Enormo-Mart for groceries at a cut rate price, even if they don’t say Hi to you, made sense. Lastly, there was no way that the small family store could get the same deals from suppliers that the huge chains do because they could never buy in the same sort of bulk. The truck drivers charged them more, the suppliers charged them more; finally, they were paying more for items than Enormo-Mart was charging the customers. Few people could afford to pay more for groceries; after all, the middle class was dying off in that town. At last, they threw in the towel.

Philip Rieff once argued that the central institution of our social life had been the cathedral; then the courthouse; and finally the hospital. (I’m paraphrasing; if you want accurate Rieff quotations, see James Poulos.) Can we now replace the hospital with the mall, that hub of our anti-cultural life? Or should we move on to the slough of despond?

As for the family, they still live in town, but they’d leave if they could sell their house. The kids got other jobs, while their parents, who are in their 60s and have both been through serious surgeries in the last year, are trying to figure out what to do next. Their house is not large at all, but now it’s “too much house” for them. She can’t really walk after a hip replacement and he has no balance after having a growth removed from his brain. The son has crone’s disease. When it rains, it (censored) pours, eh?

Our political conversation still seems removed from this reality. I think Christopher Lasch was right: the doctrine of progress without limits still animates the political left and right, with meager hopes on the right that moral limits might return and on the left that a few ecological limits might be recognized. Otherwise, it’s business as usual: what’s striking in our current debates is that the left hopes to return to the time before the econolypse with a few state protections to soften the blow of the middle class’s continued cultural and economic impoverishment; while the right hopes to return to the time before with a bit less state intrusion into that impoverishment, and a talk show for Sarah Palin.

In terms of culture, the laughs come more bitterly. For three decades, the GOP has paid lip service to the values, virtues, beliefs, and ethos of people just like these, while championing the same economic systems, with their winner-take-all ethos, “no limits”, and instant gratification, that has always been against that culture. Say what you will about Marx; at least he recognized that capitalism would eventually destroy traditional cultures; he just called it a good thing because it would set the stage for communism. After all, no one could live like this forever. All of history shows that widespread inequality makes a mockery of civic virtue.

In the meantime, the DNC would like a bit more education/therapy to guide people through the destruction of their “outdated” way of life. The things those people say, think, and believe are rather embarrassing after all, in particular, their underlying sense that life is tragic and their skepticism that progress is anything but piecemeal and always reversible. Instead, we should have hope. For what? God knows. Just so long as we don’t have tradition.

Most of all, these people are at odds with progress because they have a sense of limits: economic, political, moral, and ecological, that the wider culture cannot acknowledge, even as it pushes up against them. But, we are pushing up against them, and that’s the final punch line. After all, the sort of limits that I sense the FPR is seeking to restore to mental life are not reactionary, outdated, socialist, or unreasonable. They’re the new reality after the econolypse.

An Apologia for Tiger Woods