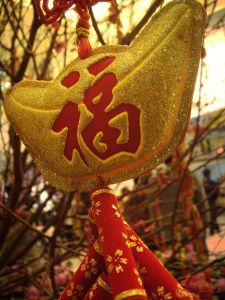 As the heat of late summer subsides here in Nanjing and our university settles into the new semester, many look forward to the annual “Golden Week” holiday in early October.  Not that anyone can really expect to get away from the excesses of routine urban life—such holidays unleash millions of people at once, in an already crowded country.  Pressed by recession as well, perhaps more Chinese than usual will stay at home this year.

They will have much to watch on television.  The central day of “Golden Week,” October 1st, is a public holiday commemorating the founding of the People’s Republic in 1949.  For the sixtieth anniversary, Beijing is going all out with the sort of national self-affirmation of which the rest of the world got a taste during the 2008 Olympics.  The spectacle will include a military review in Tiananmen Square, an opportunity to show off the tanks, missiles, and other gadgetry of China’s swiftly modernising armed forces.   Onlookers must be reminded of the régime’s success in elevating China, particularly during difficult economic times.

The official story of the last twenty years is of striving for fuguo qiangbing: a “rich country and strong army.”  The controlled media credit the last thirty years of economic growth to the Communist Party’s tough stewardship.  Growth is supposed to solve all problems in the long run.  Throw enough cars and televisions at the populace and it will forget frustrations about rising inequality.

This story reflects a lot of wishful thinking among those whose interests are at stake.  The political views of those who have benefited most from China’s development occupy a narrow spectrum.  Take my students here in Nanjing.  In family background and career aspirations, most are aligned with China’s successes.  Some have opinions eerily like their counterparts in Britain around 1860.  They worry that peasants, if given the vote, will go on a tax-and-spend rampage that will wreck the fortunes of the upper middle class.  Others would have more kindred spirits in Germany around 1910.  This nationalistic camp dwells more on securing China’s new standing in the world, and on what they see as a Western conspiracy to keep it down.

FPR readers will probably recognise in these preoccupations the same excesses of money and empire that plague the United States today.  But China has another side, which gets very little attention in the glossy magazines that depict the new shopping malls and exporting conglomerates.  The people who inhabit this other, poorer China, are being squashed by modernisation rather than enriched and liberated by it.  Ten years ago the biggest losers were laid-off employees of defunct state-owned enterprises.  Nowadays, we see small farmers who struggle in their villages to keep up with soaring educational and medical expenses, and migrant workers who find their sweatshops have suddenly closed down without paying them the last month’s wages.  Meanwhile, the village officials and the sweatshop owners drive black Audis with tinted windows to lavish banquets where they can curry favour with one other.

These inequalities were not supposed to exist at all.  I remember on my first visit, in 1997, making what seemed to me the fairly obvious observation that pulling out the stops on capitalism and globalisation would make China look more and more like Latin America.  No, I was told, I simply did not understand China.  Such a thing could never happen in a post-revolutionary state committed to equality.  They were adopting the best of capitalism without the worst.  I wish I had been wrong.  But a decade later, China has indeed gone from being one of the most equal to one of the most unequal societies on the planet.  Brazil, with its mix of Belgium and India in one country, has a rival.

These stark inequalities have emerged because, notwithstanding the rhetoric about “socialism” and “Chinese characteristics,” China has taken the worst of the West and exaggerated it.  The overall fast growth in the last generation has merely obscured the horror.  The banks have paid below-inflation rates of interest on savings, taking the difference to buy up dollars and depress the yuan.  Peasants and others who save like mad because of the shredded safety net have been ripped off as a favour to well-connected exporters.   Adding to their plight, countless peasants have seen their small plots taken away—with paltry compensation—by local officials who have pocketed bribes from real estate developers to “reclassify” supposedly village-owned land.  State-owned factories and infrastructure have found their way into private hands in the same corrupt ways.  Apparently most of the business élite here has close family or other ties with officialdom.  Those officials or entrepreneurs who do not want to play the game easily lose out.

These shifts of assets make the abuses of eminent domain and the incestuous financial sector bailout in the West look mild by comparison.  Small wonder that some observers have called China’s “reforms” one of the largest transfers upward of wealth in recent history, to rival Europe’s enclosure movement two centuries ago.  Then, to add insult to injury, much of the élite gravely concludes that democracy is unworkable in China, because the average voter would be too frustrated and vengeful to be trusted.  Poison the well, then moan that you cannot drink from it.

The story of a rising tide lifting all boats is beginning to wear thin.  It used to be easier to distract people from their grievances by invoking a project of growth-at-all-costs, to raise China’s standing as a country.  But this image of Darwinian competition with other powers begins to lose its lustre when you are an unemployed migrant worker and your well-situated compatriots are squirrelling capital offshore.  Just in the last three or four years, murmurs from the left and below have got ever louder.  Those who have lost out may have another story to start telling.

But that new story, as it emerges, will have to include a wider range of characters.  After all, the suffering of those who do not share in the élite’s project of money and empire cuts across borders.  Yes, there have been bad policy choices in China.  But the mentality behind those policy choices cuts across borders.  Which branch office torments you is almost beside the point.

One of the more worthwhile parts of my experience here in China has been exposing my students to thinkers and movements from other parts of the world.  There is nothing quite like assigning in Nanjing the likes of G.K. Chesterton, Karl Polanyi, and Wendell Berry.  The minority of students who are not fully at home with coastal urban China’s success story find much in such writings that resonates with their own experiences.  There are more than a few closet distributists among those of peasant origin here.  Sadly, however, the climate still favours a resignation to the steam engine of history.  This is partly because disaffection remains a bit shapeless for most people here.  They are exhausted with the usual choice of top-down socialism and free-market capitalism, neither of which has empowered them.  It is also because many of them simply do not realise how many people like them, all over the world, are facing the same challenges.  If they did, they might feel less powerless.

This need to think about a broader human story cuts both ways.  Why should Westerners who deplore the collusion of money and empire in their own countries care about China’s present predicament?  Can it be more than just a sad parallel, with a few swollen excesses that might serve as a warning of the future?  I think it can be.  For one thing, to be a cosmopolitan of a decent sort—as I have urged many a time on this site—means being attuned to what theatres of resistance are most promising.  I know that all battles are local, in some sense, and it is only natural for us to pay attention to the places and peoples that are familiar.  Most FPR readers will not instinctively feel that China’s battles are theirs too.  Yet sometimes you have to take the battle to the enemy, rather than just trying to stand your ground against him where he is already at an advantage.

There are reasons why battles here, over the next decade or two, will matter to the rest of the world.  Property rights and economic patterns are fluid enough to allow for some imaginative experiments.  For now, to be sure, this is one of the most constrained civil societies in the world.  But when the system eventually cracks and the most aggrieved voices get added to the public sphere, all bets are off.  These economic issues will come to the centre of the debate.  If China can avoid the sort of “frozen democracy” that sinks real debate in a mess of spin-doctoring triviality, then what is now one of the most politically anæmic societies in the world might become one of the most vibrant.  In some scenarios, the debate FPR and similar fora are trying to foment in the West could take off more quickly in China, once conditions permit.

Napoleon predicted that “When China wakes, it will shake the world.”  Sadly, for the last two decades, we have seen only the trembling of world markets before the influx of cheap manufactures, and the more sinister rumblings of an imperial project in the making.  Far more earthshaking could be what happens when the pent-up frustrations of China’s forgotten half come out.  For in every ideological and social wave of the last century—the embrace of “wholesale Westernisation,” the Cultural Revolution, and so on—China has got carried away, only to have to correct itself in abrupt ways.  A veering away from the unholy trio of money, empire, and silence is long overdue.  And whether or not we yet realise it, it should be welcomed on the other side of the world too.