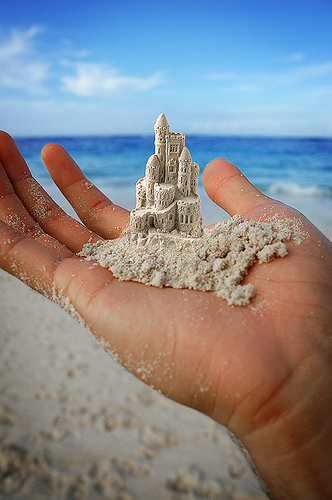 If the world is a fun-house hall of mirrors, Westerners can see an alarmingly swollen version of themselves by looking eastward.  Swollen things, as is their nature, threaten to burst.  The second great real estate bubble of the global crisis is building in China at this very moment, and in some scenarios could bring even more spillover damage to the world economy than the first one did.  The sense of urgency grew this past week as the government here took measures to rein in real estate speculation, including by raising the minimum down payment on second homes to at least 50%.

I heard not long ago that one of my former students, now working at her first job, had scraped together a down payment from her parents to buy an apartment for one million yuan.  Given Chinese salaries, this is much like a recent college graduate signing a mortgage on a one million dollar condo in America. The skyrocketing real estate prices here supposedly made this a savvy investment, as her equally anxious classmates were gravely concluding with an eye to their own futures.  Prices per square metre in Beijing are now up to some 26000 yuan ($3800) and rising fast.  Many renters wonder if the property ladder will be pulled up before they get on it.  Apartment prices in the centre of Beijing and Shanghai are converging fast on those in other global financial centres, putting them out of reach of all but urban professionals and the newly rich.  And the feverish speculation is reaching inland to second- and third-tier provincial cities.  One of my faculty colleagues recently bought a slightly more affordable place on the outskirts of Nanjing, so far beyond his already long commute that it was, as he put it, almost in another city.

The housing fever here is reshaping daily life.  Young male migrant workers struggle to save money to buy a house before they have any hope, especially given the gender imbalance, of finding a wife.  In the ever tighter and more materialistic marriage market, more than a few women are marrying a house as much as a husband.  Among the middle class, crushing mortgages have turned many insecure white-collar workers into “house slaves.”

The bubble comes partly from policy, just as it did in America, Britain, Spain, Ireland, and other countries hit hard by the first crisis two years ago.  The Chinese government has undertaken a massive spending stimulus, hoping to ward off the kind of severe downturn that could make an already impatient populace revolt.  Much of the money has flowed into local real estate projects.  City governments have got into the speculation game with a vengeance, with a third to half of their revenues from less than transparent deals with developers.  A bursting bubble would bring down the national fisc with a far bigger crash than any seen in the West so far.  China’s national debt on paper is lower than that of most Western countries, but scratch the surface and one finds massive liabilities building up at the local level and among companies partly owned by various levels of government.  A price collapse would ruin them.  Already, the signs of reckless overbuilding are coming to the surface.  Some one million square metres of office space in Shanghai sit vacant, and new shopping centres all over China have eerily few customers walking around them.

Policy is only partly to blame.  Consumer and investor behaviour has also been deeply misguided.  The rush into real estate speculation is understandable enough on one level.  With exchange controls that make it hard to move assets offshore, a volatile domestic stock market, and fears of massive inflation to come, Chinese with high savings rates have few secure places to put their money.  For those who like reflecting on the distortions of modern economic life, this pattern could be a mixed blessing.  Buying real property could well be a more stable and more place-based form of wealth than the confidence game of the capital markets.  If China were truly becoming a property-owning democracy, then these investment choices could be quite hopeful.

But look a bit deeper, and we find some much more troubling assumptions writ large here.  For one thing, ownership of real estate here is never freehold, with a permanent title that can be passed down through the generations as in traditional society.  It is a long term lease, typically seventy years.  Developers aiming for a quick profit do not build to last.  Even apartment buildings fifteen or twenty years old already look like tenements, with leaking plumbing and the window frames visibly rusting and falling apart.  They are shoddy even compared to countries at the same level of prosperity.  Old neighbourhoods like the hutong courtyard homes of Beijing have been replaced by monstrosities of concrete and glass.  Preservation has been cast aside in the rush to modernise in the most superficial of ways.  One builds for a generation at most.  One of my friends here once remarked that there is little sense of an enduring family home, since the son has to build a new and different house from the father each time.  Just as the architect, guildsman, and distributist A.J. Penty wrote early in the twentieth century, complaining about new developers’ practice in England at the time, people no longer value housing built with an æsthetic of care and permanence.

Much of this is hardly unique to China, therefore.  The impermanence of modern housing is a worldwide trend that reflects more than policy.  Tocqueville once remarked that homes on the American frontier were hastily hacked from the forest, only to be abandoned a few years later as the owners moved on to more promising terrain.  Such mobility has become the psyche of late modernity.  Decaying tenements and leasehold in China are matched, in spirit, by the Western pursuit of the “starter home,” leading always up the “property ladder” to something bigger and better.  They are trajectories of modern wealth, not embodiments of space and sentiment.  How many McMansions will survive, weathered by history and experience, two centuries hence?  No one is likely to walk around the site of what was once a modern housing development, and feel the same enduring human presence that I have felt in well preserved mediæval towns, long-farmed village landscapes, and even the stone-marked paths trodden by generations of muleteers through chilly mountain passes.

To many FPR readers, no doubt it is more appealing to think of real estate as bound up with place and people.  The owner-occupied cottage, enduring over the generations in a family of farmers or craftsmen, is a cultural ideal for those of distributist bent.  But the traditional view of property can be broadened a good deal further.  Even as an asset rented to someone else, real estate used to have a very different economic function and used to support quite different habits of mind.  A distant relative of mine kept, for his entire lifetime, a small office building in Sheffield first bought by his great-great grandfather in 1736.  The Methodist founder John Wesley used to preach to crowds from a window diagonally across the square in the 1770s.  One has a very different connexion to a place on such a time frame, and much more of a stake in its sustainability, even when one does not live there oneself.  Such a view of place-based property is from quite another world than that of the condo-flipping speculator who wants to get in on a new development, leverage a tiny down payment, and then sell at the peak before moving on to the next bet.  Even for the average homeowner, ownership all too often is imagined as a way of gaming income flow and consumption over a lifetime, accumulating enough to spend down before one has to become a ward of the welfare state.  It is part of consumer society, not a buffer against it.

And this is a game encouraged by policymaking élites.  The house slaves in China, and the Fannie Mae borrowers in America, have their noses to the grindstone in ways that work quite contrary to what small-scale property ownership used to mean.  It used to mean a decent independence from the more degrading aspects of first serfdom and then the capitalist labour market.  It meant the security of the home as “castle,” a vision that prompted Prime Minister William Pitt to marvel that “The poorest man may in his cottage bid defiance to all the forces of the Crown. It may be frail, its roof may shake; the wind may blow through it; the storm may enter, the rain may enter—but the King of England cannot enter; all his force dares not cross the threshold of the ruined tenement!”

Now, the practices surrounding property ownership tend to lock people more firmly into the soulless rat-race of consumer society, to serve others’ ambitions of profit and power.  Even those who own property without a mortgage have, especially in America today, high (and regressive) property tax payments that bind them into the labour market.  There is something deeply wrong with a society in which property works against place rather than for it, and for dependence rather than independence.  Anyone from two hundred years ago would think it required an unusually dark imagination to invent a system in which either could be the case.

Some of the remedies to these trends are cultural, along the lines of what many on FPR have been encouraging.  Others might focus on key policy pressure points.  Discouraging speculation by raising down payment requirements, particularly on non-owner occupied housing, is one obvious and oft-proposed measure.  Less obviously, lengthening the workmanship guarantee that builders must insure and encouraging sustainable forms of construction (brick and stone rather than clapboard, for instance) might also shift time horizons.  Capital gains tax rates could favour much longer term investment.

It should also be a priority to lighten the continuing financial burdens of small property owners, to rebuild a distributist-style independence and the flexibility to withdraw from some excesses of the modern labour market.  One method could be to replace ongoing local property taxes with a one-time contribution, at the time of construction or purchase, to a community-owned capital endowment out of which to finance the bulk of local expenditure.  Such a capital endowment could support local businesses in turn.  It would feed back into local employment, to counterbalance the tendency in many areas for wages to lag behind housing prices.

In the end, of course, any solution to such real estate bubbles and the accompanying cultural pathologies must be part of a bigger picture.  But we often pay too little attention to the vision of ownership that must inform it.  The distributists offer valuable insights into dispersion of power and the material conditions for human dignity and community.  Bubbles of this sort should prod us to refine both the diagnosis and the alternative.  We should consider not only how to bring about widely distributed ownership, but also how to strike a balance across housing and productive assets, how to lengthen time horizons, and how to channel often quite simple and human aspirations to prosperity into channels that fortify rather than erode character.