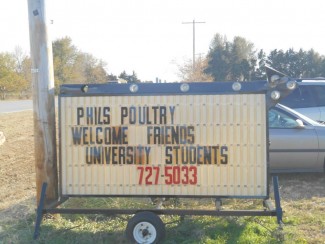 [Cross-Posted to In Medias Res]

The semester has come to an end here at Friends University, and students are leaving campus for their holiday break. Right now I’m grading, and while I have many tests to grade, none interest me quite as much as the exams turned in for “Simplicity and Sustainability” course which I taught for the second time this semester. I gave my students questions on the readings we’ve discussed–the writings of E.F. Schumacher, Herman Daly and John Cobb, and many others–but more importantly, I asked them to go beyond the questions, and use the essay portions of the exam to reflect upon alternative forms of social and economic organization. That was the focus on the course, after all–to consider, criticize, and comment upon the range of possibilities available to those who truly wish to make their livelihoods, their lifestyles, and their neighborhoods both simpler (meaning, most essentially, more readily available to and responsive to their own collective efforts, rather being dependent upon inaccessible systems beyond their reach) and more sustainable (that is, less exploitative of the resources, both human and natural, upon which all communities are built). That such possibilities are available is the primary reason why I teach this course, as well as try to bring similar insights into as many different classes I teach as possible. While I love taking students out to visit local farmers and producers (as the above sign, kindly provided by Phil and Lucy Nisly, one of the great localists I’ve gotten to know here in south-central Kansas, plainly shows)–some alternatives are much closer (both in distance, and in terms of social and economic change) than that. 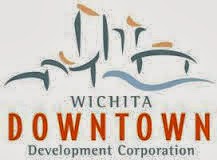 Early in the semester, I stopped by the Wichita Downtown Development Corporation, and spent a while familiarizing myself with some of the work which this decade-old organization–a non-profit corporation which works with local businesses, developers, and government agencies, using money raised through a mutual improvement district which all the downtown business pay into–thinks about making a mid-sized city like Wichita more sustainable. There’s actually been a fair amount of activity on this front; Wichita, KS, was chosen as one of the cities which the Urban Sustainability Accelerator, a program at Portland State University, would focus on turning 2013-2014, with plans to bring together various actors to get ideas (and funds) generated to push forward more green and more localized development in some key parts of our city. This led, in turn, to city planners and transportation experts from various local organizations and government agencies to visit the class, and lay out what concerns them most. Some major worries: include that cities like Wichita–like too many other mid-sized cities–suffer from an inferiority complex of sorts, such that home developers can almost always count on city officials to throw in “special assessments” to lure home developers to expand their footprint and keep housing costs relatively low; that the expansive footprint of the city contributes to an overemphasis on continually develop and expand our primarily roadways, assuming that such suburbanization is the only viable model for holding on to our labor pool, thus making it ever harder to push the city itself in the direction of bicycling, walkability, or mass transit; and that, for all these reasons (not to mention several that are probably somewhat particular to the political culture of this part of Kansas), the very word “sustainability” moves even non-Tea Party types to immediately think in hysterical terms of socialist government planning, rampaging secularism, and the United Nations taking over the country. So some other term is necessary to clear the air (I’m told that folks down in Waco, TX, dealing with similar paranoid resistance to citizens organizing themselves to promote local goods through planning, have come to speak solely of “stewardship” or “creation care.” Whatever works, I guess.) 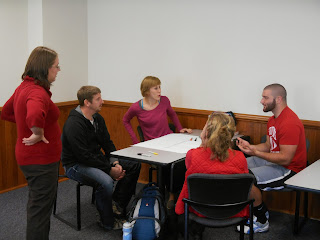 When looking at moving such a large entity–and of course, the largeness of even a city like Wichita depends upon one’s frame of reference–as Wichita in a “simplifying” direction, you need to begin from below, as well as above. And so we also continued the on-again, off-again conversation which we’ve had here at Friends for a while about a community garden. Rebecca McMahon–whose expertise as a county extension agent is hardly elitist, but rather very much part of the effort to get all of us more engaged in our own food supply–made two visits to Friends University, to talk with us about various strategies. With the input of the nearby Northfield School, and the example of some other local gardeners, with any luck a few of us, students and staff and faculty, are moving towards adding a small but sustainable contributor to Friends University’s local ecosystem–and giving our local community greater opportunity to get back to the earth at the same time. 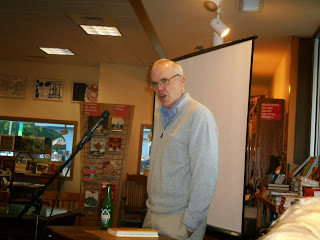 If there was any single overriding theme to our class this semester, it was the question of scale–whether working from the bottom or the top, we have to be able to think clearly about what is about the social and economic organizations that we focused upon which we wanted to simplify, or make more sustainable. When is tending to the local the proper route to take, and when is taking broad and radical stands? And can you do both at once? Bill McKibben, the famed environmentalist, author, and challenger of our all-growth-all-the-time economy, argues in his latest book that you can. As for myself, I’m not sure–though it may be that, in out globalized world, you can’t effectively choose not to. Certainly that was the point McKibben made when he visited Watermark Books here in Wichita this semester–the local (in his case, learning to keep bees) has been utterly changed by national and international forces rampaging across the planet, and so nothing less than equally broad and radical actions–which McKibben, a retiring and bookish person at heart, has found himself spearheading through his 350.Org campaign–are called for. I and several of my students went to hear him speak, and I can’t deny: he’s a persuasive man, who wants people to understand that we need to simplify and scale back the entire global oil economy, if we want to keep our communities sustainable in the long run. 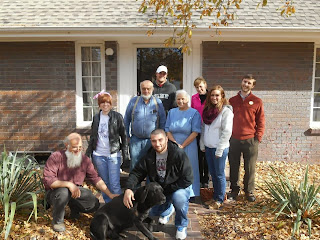 McKibben probably isn’t wrong–but neither is his radicalism particularly hopeful, or joyful. And what is the point of living a life that is more local and more truly one’s own, if such simplification doesn’t bring any more joy and contentment into your life? Which is why I was grateful, once again, to be able to make use of the wisdom and generosity of multiple farmers and producers near Wichita, most especially the Hershberger family, Leroy and his parents, who have opened up their home multiple times to these “Local Food Tours” that I organize. The comfort, pride, and love that they have for their particular place–the farmland of Reno County, and the Amish, Mennonite, and other Christian folk that have grown up in (or have left and then later returned) to that place to work the land and trade with and teach one another–is reflected in their language, their families, the attachments, and not least their food. (Who knew that butternut squash pie could taste so fine? I certainly didn’t.) Repeatedly through our tour that day, we were taught, by word and by example, that the quest for greater personal and collective responsibility over those things which are most properly one’s own–food, shelter, family, livelihood, community, and so forth–is one which requires constant “tendance,” to use a term which the political theorist Sheldon Wolin developed long ago: one must become deeply familiar with, and committed to, ones limits, and think about what needs to be done in accordance with them. How to make use of this land? How best to raise these chickens? How can I adapt to specializing in a different crop? How can I pass this down to my children, and their children after them? How can I prevent myself, as I make decisions about schooling and budgeting and my faith life, from being “encumbered” by this world? This requires time, memory, and affection. Wendell Berry calls it “local knowledge,” and the people who we visited, particularly the Hershbergers, clearly had it in spades. It is unlikely that anyone who takes seriously a more or less agrarian way of life can truly be without such. And yet, for all the legitimate reasons we might have to be suspicious of ever-expanding and ever-complicating logic of urban life, it would be wrong to say that city planners and gardening experts and transportation designers that visited my class were without such knowledge as well. True, they may not have been deeply focused on building an alternative form of social and economic organization, but they surely did have an often quite intimate grasp of the urban and environmental issue which face Wichita’s residents, one that can only come from tending to a place–and as such, they may well be capable of asking the sorts of questions about sustainability and scale that, I think at least (and hopefully at least some of my class thinks as well), need to be asked.

The great problem which always faces any attempt to talk about–much less teach a class about!–how recognizing psychological, economic, and environmental limits may enable us to think less technologically, and more holistically, about slowing down and simplifying and making ours a more sustainable way of life, is the tendency to want more than “tendance” as a support for our efforts. More than “merely” tending to one’s garden, we wish to deal with the larger threats to said garden. And we need to! But of course, any departure from our place to addressing larger issues is inevitably reductive of the place we’ve left–and reductivity is exactly the wrong kind of simplicity that we should seek. Real local, sustainable knowledge is diverse and changing, like the natural world: its simplicity comes in our structuring our lives and vocations to be near it, not in methodological homogenizing of it from afar. There is no simple answer here–real simplicity, the kind that can make for a more secure and joyful life, remains a pretty complicated affair. I’m grateful, though, that some continue to seek it–and by so doing, help me and my student learn more about the choices that we face, in an ever-more pressing fashion, each and every day.