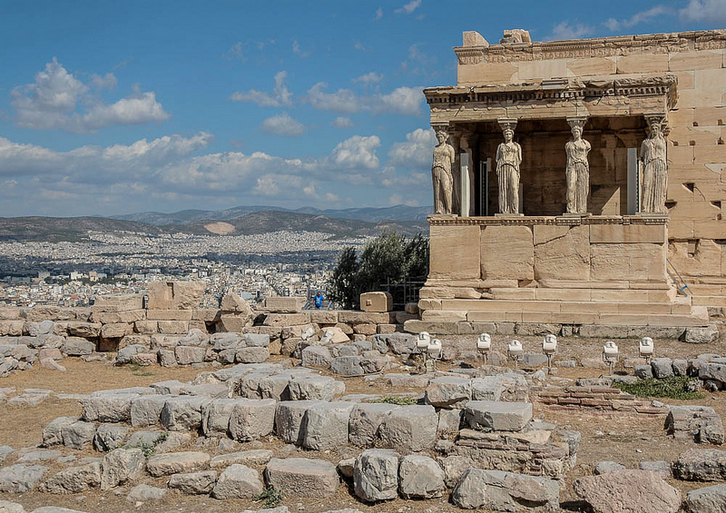 For tonight’s lesson, I said to my ten-year-old, tell me how the first democracy was created.

“Sure,” she said, remembering our lessons past. “It was in Athens, about 2,500 years ago, and the poor people of Athens were unhappy and getting ready to revolt. So the leaders of the city put a philosopher named Solon in charge – he was the one person everyone trusted.”

She was right, at least according to Plutarch. Once many students read stories like this, from Roman scholars to Victorian schoolboys to American pioneers; these days I have to introduce them to my daughter through home-schooling. Reading the Ancient Greeks presents no great chore, though, as many of their stories are as melodramatic as any soap opera, and with the occasional screwball turn into pure comedy.

What did he do once he came to power? I asked. Did he make himself king?

“No!” said my daughter emphatically, “He said everyone had to vote, create juries, and so on, and made everyone swear an oath to follow the rules of a democracy; no one could change them except him for ten years. Then, after everyone had sworn, Solon said, ‘Good! Now I’m going on vacation – for ten years!’”

Excellent, I said. And it worked – but before long there was trouble, and they almost lost their democracy when it had barely begun. Some Athenians wanted a local gangster named Peisistratus to be their ruler – remember that everyone was used to having a ruler, and not having to rule themselves.

“Piece-a-stratus?” my daughter repeated. “Did a Mr. Stratus have several kids, and he was one piece?”

Well, he was certainly a little piece-of-something, I said, and he came up with a cunning plan to take over Athens by force – three times.

My daughter looked perplexed. “You mean he came up with three plans, in case one didn’t work?”

“Um. Hang on,” she said. “He took over the city and became dictator three times in a row? And he was never put in prison or anything?”

Prisons only became common recently, I said, and even now in most of the world they’re rarely used – the United States is an exception. Athens used to exile people if they got to be too much trouble, and everyone would vote on who to kick out of town. Except with Peisistratus it didn’t work – he kept coming back.

“Why did so many people let him take over?” she asked in disbelief.

The same reason people want strong leaders now, I said; if you just put your hero in charge, everyone can rally around the hero, and you can all just beat up the people you don’t like. Democracies, on the other hand, aren’t much fun – you have to listen to people you disagree with, and everyone has to make compromises that nobody likes.

“But if most Athenians wanted democracy, how did Peisistratus take over?” she asked.

By trickery, I said – first, he showed up with a shallow wound – Herodotus says he wounded himself – and said, “Oh, no! I’ve been attacked by Solon’s supporters! What kind of a people are we who let gangs with knives roam the streets!” I put the back of my hand to my forehead in a diva gesture.

“Why would he wound himself?” she asked.

It wasn’t a serious wound, I said, and it made everyone sympathise with him, so the Athenians let him walk around with bodyguards. Then Peisistratus hired fifty of his supporters, armed with clubs, to follow him around like an army.

Yes, it was a bit excessive, wasn’t it? I said. Then Peisistratus showed up at the government building with his fifty armed men, and everybody let them in because they were his bodyguards. Then they took over the government office and made Peisistratus the ruler.

“They weren’t the brightest, were they, Athenians?” she said.

Well, they were a bit new at this, I said. Thankfully, they raised an army to defeat his bodyguards and kick him out.

“But he left the country and came back again?” she asked.

Well, he went off and made money somewhere else, doing basic gangster things, I said. Eventually he saved up enough for a chariot — covered in real gold, like gangster might have today – and started driving it back to Athens.

That’s right, I said. Then he hired a beautiful woman and dressed her up like Athena – patroness of Athens – and drove back on the road to Athens in the gleaming chariot, with the woman in front saying, I am Athena, your goddess – you should all have Peisistratus be your leader.

There was a pause. “You’re joking,” she said.

No really, I said, that’s what he did. It wouldn’t be the first time a politician said they had God on their side. And he took over again, and the Athenians kicked him out again.

“What about the last time?” she asked.

Well, I said, that time he and his supporters only had the power to take over the temple at the top of the hill, so they did that. The Athenians raised an army to stop him again, and they gathered around the hill, with Peisistratus and his men outnumbered at the top. Then Peisistratus came out to the front of the temple and said he had an announcement for everyone.

He stood at the steps of the temple, looking down the hill at the Athenian army gathered outside the temple grounds, raised his arms impressively, and shouted, MUMBLE-MUMBLE-MUMBLE.

Another pause. “What?” my daughter said, laughing.

He said something that the Athenians couldn’t make out, I explained. So the Athenian army all shouted back, WHAAAAT? I always pictured it like the villagers in the film Young Frankenstein, talking to the police inspector.

WHAAAAT? the Athenians all said. WE CAN’T HEAR YOU.

You’ll have to all come a little closer, Peisistratus said, so you can hear me. Come inside the temple grounds, and listen. I’ll have my men back off.

So Peisistratus’ men left, and the Athenians all left their weapons in a pile at the gate – they couldn’t carry weapons onto sacred ground – and all shuffled in and gathered around Peisistratus. Okay, they said, we’re here.What did you want to tell us?

What I was saying before, Peisistratus said, Is that we’re taking over the city. My men have just circled ‘round to the gate and taken all your weapons.

My daughter smacked her forehead. “D’OH!” she shouted, Homer Simpson style. “What a bunch of muppets! Please tell me they got smarter as they went.”

Everyone thinks they’re smarter, I said — wise people understand how little they really know. Speaking of Socrates, I’ll introduce you to him next week.

Reading these instalments of their true-life melodrama, I wonder why we stopped teaching th classics. These stories link us culturally to the hundreds of generations who read them before, so that when Roman scholars to Victorian schoolboys to American pioneers quotes Pericles or Thucydides, we understand the reference.

These stories take the things we would see in any small town or neighbourhood today — elections, libraries, theatre – and tell us how they began, on rocky outcroppings 26 centuries ago. It cures us of the notion that we are special or superior to our forebears; rather, it helps us know the people on whose shoulders we stand.