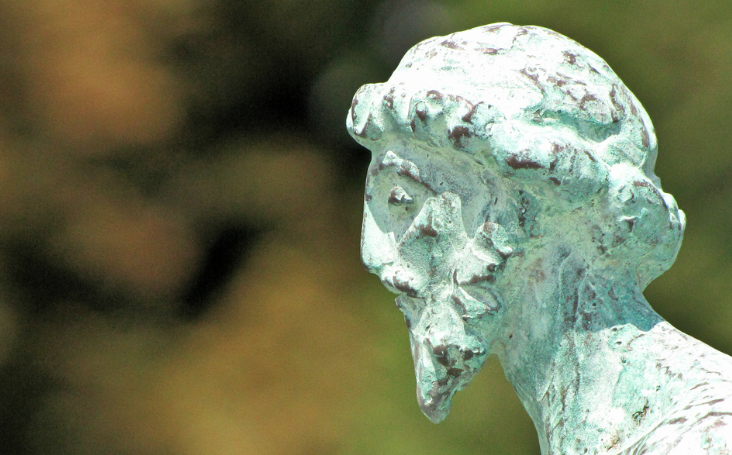 For our home-schooling lessons my daughter and I have been reading Greek and Roman philosophers, and she has taken a shine to the Stoics – not only reading them with me, but trying to incorporate their ideas into her life. Most people these days could use a dose of such wisdom in their lives, especially adolescents, so as my daughter grows up, I’m encouraging this phase as long as it lasts.

A quick explanation: The Stoics were one of the many philosophical “schools” inspired by Socrates and others in the Golden Age of Athens, each trying to answer basic questions like, “What is the meaning of life?” and “How should people act?” Each school came up with their own answers: Epicurus and his followers taught that people should strive to be happy, and make others happy; Cynics to live with radical honesty and simplicity, and Stoics to follow a moral code of honour and self-control. There is far more to these philosophies than these few words, obviously, but we’re talking about a child’s introduction.

Of course they are not incompatible with each other, nor with religions like Christianity. Following one school, then and now, doesn’t mean opposing the others – it just means one surmounts the others in a pinch, perhaps as Einstein’s physics become necessary when Newton’s are out of their league.

Unfortunately, there aren’t many resources to teach such things to modern kids, and most available versions come in archaic King-James language for some reason, as though to keep everyone else out of the philosophers’ club. Take this excerpt from the version I found of Marcus Aurelius’ Meditations:

Spend not the remnant of thy days in thoughts and fancies concerning other men, when it is not in relation to some common good, when by it thou art hindered from some other better work. That is, spend not thy time in thinking, what such a man doth, and to what end: what he saith, and what he thinks, and what he is about, and such other things or curiosities, which make a man to rove and wander from the care and observation of that part of himself, which is rational, and overruling.

Don’t nose into the private business of your neighbours, unless it’s out of some sincere desire to help them, and then only as much as you need to. Instead of wasting time gossiping about others’ lives, change your own; you can’t truly control what other people are like, but you can set an example for them to follow.

She gets more out of the latter version, but even then their examples can be quite abstract, and the chariot-and-tunic references a bit dated. People learn more from hands-on examples – one reason Jesus used parables – and in our case, we watch the classic films of the 1930s and 40s. Thus, we’ve been looking for characters who seem to embody the Stoic — not the common adjective of “show no emotion,” but characters who take a brave stand, for selfless reasons, simply because they think it’s the right thing to do. They don’t have to be pure, perfect or even likeable; they just need to take action for a principle.

You might think that’s basically every movie hero, but not really: many protagonists, especially men, start out amoral, only reluctantly doing the right thing at the end, from Clark Gable’s character in 1936’s San Francisco to Chris Pratt’s character in 2014’s Guardians of the Galaxy. As adults we understand this as entertainment, but generations of boys have grown up emulating such characters, only belatedly realising, in the hangover of maturity, that Ferris Bueller and Han Solo were actually terrible human beings. Other movie heroes – however brave or sympathetic — seem less driven by principle than by a desire for adventure (Bilbo Baggins, Luke Skywalker), greed (Scarlett O’Hara), desperation (Tom Joad) or infatuation (any romantic lead).

The Girl and I think Frodo Baggins in Lord of the Rings passes the Stoic test – he took the Ring because someone had to – but Bilbo does not, heroic as he later became. The elves qualify but not the humans; both were heroic, but the humans were trying to stay alive, while the elves could have fled at any time, and some chose to stay and sacrifice themselves for strangers.

As much as we liked Harry Potter, he would not pass the test; he fought for survival, revenge, and romance as well as principle. Errol Flynn’s Robin Hood, Basil Rathbone’s Sherlock Holmes, Mr. Spock, Doctor Who and the Lone Ranger would all qualify, although their fantastical adventures don’t always have the most applicable lessons to everyday life.

Perhaps surprisingly, many cynical films noir feature a Stoic hero; Sam Spade in The Maltese Falcon and Phillip Marlowe in The Big Sleep could have gotten the girl, their money and the credit for solving their cases, but they gave it all up – or risked doing so – to find the truth, for no reason other than it was the truth.

Hildy’s tough reporter in His Girl Friday would qualify, as would Carole Lombard’s brave resistance spy in To Be or Not to Be – an important point when teaching a daughter, for female protagonists are rare enough, and principled ones rarer still. Most traditional female characters are often too passive to pass our test, and most post-feminist ones too selfish – but Bette Davis’ character in Marked Woman might qualify, as might Katniss Everdeen.

Recently I showed her 12 Angry Men, and we both agreed that Henry Fonda’s character was a Stoic – even when everyone was against him, he kept his cool and stuck to his arguments, and one by one persuaded everyone in the room. I’ve been pushing us to read To Kill a Mockingbird soon, and introduce her to Atticus Finch. To hit the jackpot for Stoic heroes, though, you have to turn to the now-extinct American Western, and a few nights ago, I showed her Shane.

Shane – perhaps the greatest Western ever – begins with the titular character wandering the West on horseback and chancing upon a pioneer homestead. A gentle, courteous man, he seems to be scarred by a violent past – when he hears a small sound behind him, he instinctively whirls around with his gun drawn. When the homesteaders – the Starretts — offer him food and a place to stay the night, he stays on to help, and settles into a peaceful new life as a farmhand.

Soon, though, we see the local tensions – the local rancher, Ryker, wants the land for his cattle, and tries to bully the Starretts and their neighbours into leaving. Shane tries to stay out of the conflict as long as he can, but eventually he takes up his gun again, risking his life for the farmers but unable to remain with them.

I grew up with Shane, but as an adult I saw new depths. A lesser film might have shown Ryker as a cartoonish villain – yet the film gives him a tearful speech in which he begs the farmers to leave peacefully. For a moment we see the world as he does: he considers the farmers to be usurping his land and destroying his life’s work. He remains villainous – he burns a family’s house and hires an assassin to murder the farmers – but his imagined righteousness gives him a tragic depth.

Similarly, Ryker’s ranch-hand Calloway seems to be a simple thug, picking fights with the farmers that come to town. As the feud turns deadly, however, he secretly meets with Shane to warn the farmers of Ryker’s plans.

Well, the film takes the side of the farmers and he’s against them, I responded, so we cheer when Shane beats him up. But from his perspective the farmers are the enemy. It’s easy for us to cheer our side and to jeer at evil, because evil is always somebody else. It’s empathy that gives us trouble.

But most people have a limit too, I said — a line that their conscience won’t let them cross. Fist-fights were one thing, but Calloway hadn’t signed on for treachery and murder.

“I think Shane is a Stoic,” The Girl said. “Do you think he studied philosophy?”

He seems a cultured man, I said – this would have been after the American Civil War, so perhaps he was an officer and gentleman who couldn’t go back to his old life. Still, you look through education guides from the late 19th and early 20th centuries, and children often read ancient Greeks or Shakespeare, even in poor rural areas.

Finally, I pointed out to my daughter the subtle way the film implies an attraction between Shane and Starrett’s wife Marian – for example, when she cautions her son not to grow too attached to Shane, and we gather that she is talking partly to herself. What’s refreshing, though – and so alien to pop culture today — is the assumption that their attraction ought to remain unspoken and unfulfilled.

“What if they were to fall in love?” The Girl asked.

These days, our culture uses the word “love” for attraction, I said – it’s not. And these days, every pop song, every movie, every television programme tells you the same thing about your life – that what matters most are your feelings, and that all feelings must be indulged. But that’s the exact opposite of what the Stoics taught. Being free, they believed, meant not being ruled by your feelings, but being able to rule yourself.

Feelings happen, I said, and they come and go quickly, never to your credit or your fault. Doing what’s right, though, usually means doing things you don’t feel like doing. That’s being a grown-up.

“I never thought of relationships that way,” she said. “I’m not sure I’m ready to be grown up yet.”

I’m not ready for you to be grown up yet either, I said, but don’t worry — it’s a long way away for you.

For me, I said, it’s happening very quickly. I’m trying to be Stoic about it.

When Children Resemble Their Fathers